Family Surprises Sisters with Baby Brother Under the Tree!

The best gifts can't be found in stores

Family Surprises Sisters with Baby Brother Under the Tree! 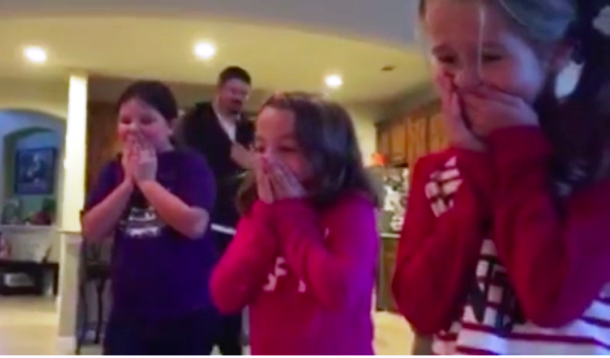 When Courtney Solstad and her husband told their three daughters they were going out on a date to do some shopping, the girls likely weren't thinking that they'd receive any of their Christmas gifts early.

And they most certainly did not expect to find an adorable sleeping baby under the tree when their parents arrived home.  But that's exactly what happened, and the three little girls couldn't be happier.

Crying tears of joy and jumping up and down excitedly in a now viral video, the newly minted big sisters exclaimed that they didn't even know that a new brother would be joining their family.

“I’m gonna wet my pants,” exclaims one daughter. “Don’t do that,” replies Solstad.

Wee Nathan is swaddled in blue and slumbers peacefully underneath the branches of the tree, oblivious the the emotional welcome the girls are giving him.

Solstad shared the sweet video on Facebook, adding in a caption: “The girls knew nothing about Nathan until this. We met them at the door and told them that we had been out Christmas shopping and got them a gift to share…”

Parenting and pet experts generally recommend against giving puppies and kittens as gifts over the holidays, citing reasons like life-long commitment, having to train them and clean up after them. You'd think that babies would fall under that category too (says this Happy Mummy who gave birth to a baby on Christmas Eve).

But Chloe, the Solstad Elf on the Shelf, left a touching note next to the swaddled in blue bundle of joy that explains why this gift is so special (gift guidelines or not!).

"My Christmas Wish List... for my mom and dad to have the baby they desire," says the touching chalkboard message.

Congratulations to the Solstad family!

Kind gesture gives new meaning to home for the holidays 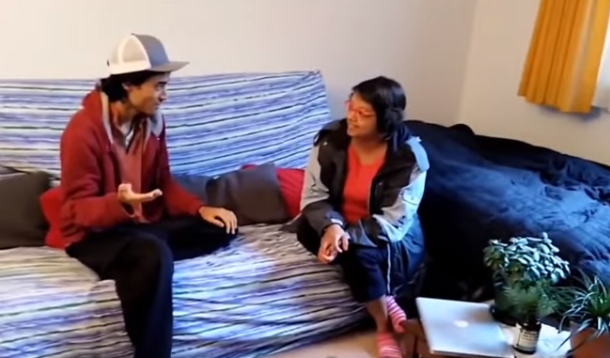 Last March, Brice Royer needed help. Battling both stomach cancer and depression, the Vancouver resident was told by his doctor that feeling loved and cared for was the world's best medicine.  So he headed to Craiglist and posted an ad offering his unconditional love for free. In Canada's most expensive city where nothing is free, the ad went viral, putting a smile on over a million people's faces.

One of those people was Francesca Murray, a single mother living in a homeless shelter with her four year-old daughter Charlotte. It's where Murray and Charlotte have been living for the last 14 months, after fleeing a difficult relationship and struggling with her own mental health. The situation of course, is very stressful, even for an optimistic mama like Murray. “It’s pretty hard. It’s really hard for the kids, because they get uprooted multiple times,” she says.

Despite living in a shelter where food often runs out, Murray offered to cook for Boyer, the one gift she felt she could give him to brighten his day. “I noticed he needed someone who could cook. I can cook really well, at least that’s what everybody else tells me,” says Murray.

Instead, Boyer generously surprised Murray with weekly groceries, which she then shares with other people in the shelter.

But the feel good feels don't stop there!

Boyer recently learned that Murray and her little girl have to move out of the shelter by the end of February. With nowhere to go, Boyer decided to give Murray with the best Christmas present ever.

Boyer surprised Murray with the announcement of a fundraising campaign during an event last weekend (keeping it a secret and letting her think it was a silent auction and party for another friend). The online FundRazr campaign has already raised more than $6,000 of the $25,000 that Boyer would like to raise. Of the goal amount, $5,000 will be given to Murray to help her with any temporary housing needs when she leaves the shelter. The remaining $20,000 will be used to purchase a tiny home (which explains how this particular Christmas present can be wrapped, or at least put into a really, really big gift bag). The home will rely only on solar power, will not have any monthly bills and will be built by the end of March.

According to the FundRazr page, it's hoped that the 300 square-foot tiny home will become part of an international pay-it-forward tiny home movement. After Murray is in a place of her own, the tiny home can be used to help others who are going through transitions. In Vancouver, where the average home price tops $800,000, affordable housing is key to helping people get back on their feet. We love this huge vision of bringing hope to others. As noted on the FundRazr page, homelessness can happen to anyone.

For young Charlotte, who has spent much of her life in the shelter with her mom, this gift brings new meaning to home for the holidays. “Mom, I think Santa arrived early for me,” said Charlotte.

Murray agrees. “I think Santa did too, because now we have a home.”

RELATED: This Holiday Commercial Will Make you Cry Like a Baby