Police Start Pantry for People Who Call 911 for Hunger

Police shine some light on this man's darkest day 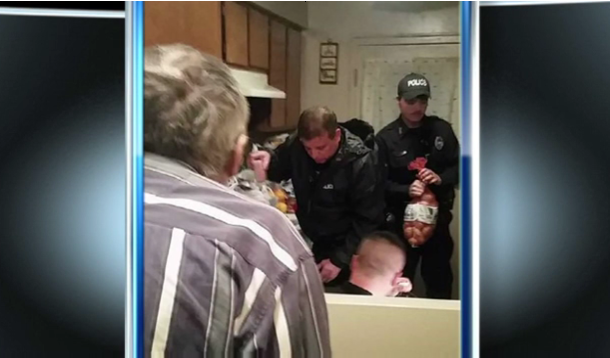 We make jokes about being "hangry" when we haven't eaten. I always have a granola bar in my purse, and I generally pack a small cooler for trips longer than 20 minutes. Being hungry sucks, sure, but for most of us, finding the next meal or a snack is simply a matter of getting up off the couch to prepare it. But some people - a lot of people - aren't as lucky.

Police in Nashville are being praised this week for helping stave off some community hunger by going beyond the call of duty. The catalyst came when the group of four officers were called to help an elderly man in distress. The 79 year-old disabled man - whose name is being kept out of the press for privacy reasons- had called 911 to report a theft and ...hunger. The man's caregiver had stolen his debit cards, leaving him with empty cupboards and literally no way to restock them. He hadn't eaten in two days, at which point he called 911 and the Mt. Pleasant police force responded.

Responding officers took the report (they later apprehended the thief) but their efforts didn't stop there. They went grocery shopping, gathering supplies to donate to the gentlemen at their own expense. Not only that, they've now started a central pantry at the police station to supply emergency provisions for similar reports in the future, which are unfortunately becoming more common.

From WKRN in Nashville:

A group of Mt. Pleasant police officers are being recognized for going out of their way to help an elderly man over the weekend. Saturday night, the 79-year-old disabled man called dispatchers and said he had not eaten in two days. A short time later, a group of officers showed up at his door with several bags full of groceries. The officers had spent $160 out of their own pockets to make sure the man had enough food in his kitchen to last him a month.

“I think he was shocked at the amount of food that we bought and just the fact that it was there without question,” said Nathan Bolton.

No one deserves to go hungry, or to be stolen from, or to be frightened. This man was hungry for certain, and had his property stolen by someone hired to care for him. With no one else to reach out to, 911 became his only option, and placing the emergency call was valid in this circumstance. How wonderful that rather than just show up with pencils poised ready to file a report, police came armed with bags of food, leaving this man with food security until he is able to recoup his loss.

Now this is some community policing that warms the heart - and the belly!