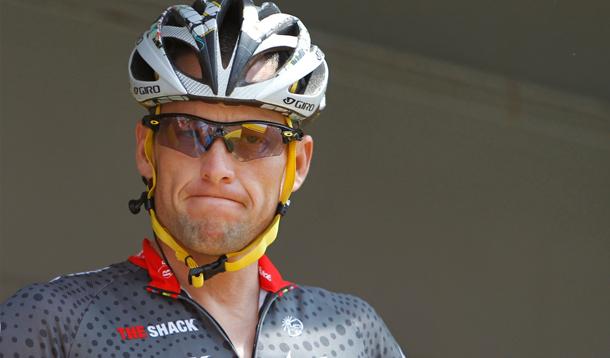 Ok, so it's official. Lance Armstrong cheated and has now been stripped of all seven Tour de France titles. He's also been banned from cycling professionally by the the International Cycling Union.

As if that wasn't bad enough, the Huffington Post now reports that members of the cancer charity Armstrong founded, Livestrong, want their donations back.

Although Armstrong recently resigned from the organization during the so-called 'doping scandal,' some of its supporters say it's a little too little, too late.

"The whole thing is founded on a lie. The guy cheated, and he forced other people to cheat,” said Michael Birdsong. “I would like my money back. We donated under false pretenses."

Birdsong and his wife, a cyclist who was diagnosed with breast cancer, apparently donated $50,000 and raised a further $150,000.

I'm not surprised by the couple's feelings of betrayal. However, as Livestrong goes into its 15th year, and cancer is still going strong, no one can deny the good that Armstrong's charity has done, to the tune of $500 million.

Isn't it enough to rob the man of his athletic titles and corporate sponsorships (Nike and Anheuser-Busch), or should Armstrong also step down from the board at Livestrong?

This Sunscreen Will Set You on Fire. Literally.

This Sunscreen Will Set You on Fire. Literally. 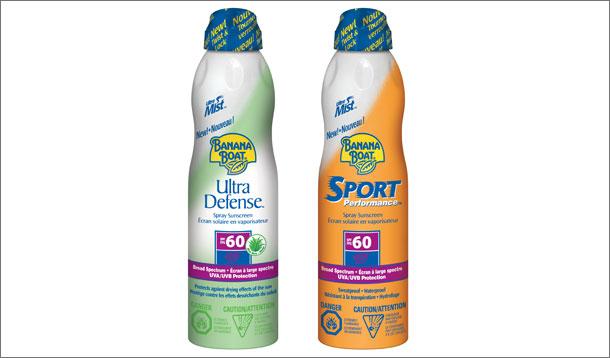 Just as we wistfully leave summer behind for another year comes the announcement that Banana Boat (BB) sunscreen can actually lead you to spontaneously combust. For real.

The spray-on sunscreen has been recalled in both Canada and the U.S. after reports of people literally catching on fire after "coming into contact with an open flame."

According to an article in MSN, five cases were reported, four of which resulted in burns (one occurring in Canada).

The hazard, according to Energizer spokesperson, occurs when too much spray has been applied or has come into contact with a "source of ignition" before the spray has completely dried.

More information about the voluntary recall is available from manufacturer, Energizer Holdings, at 1-800-SAFESUN.

Of course the label warns consumers to "Keep away from sources of ignition — no smoking." Ditto for many aerosol products, from hairspray to deodorant. But really, who reads cosmetic labels beyond its ingredient list? Personally I'm not a fan of the spray-on lotions, since they tend to feel quite sticky on the skin.

Do you use aerosol sunscreens over traditional lotion-based creams? Will you continue to do so? 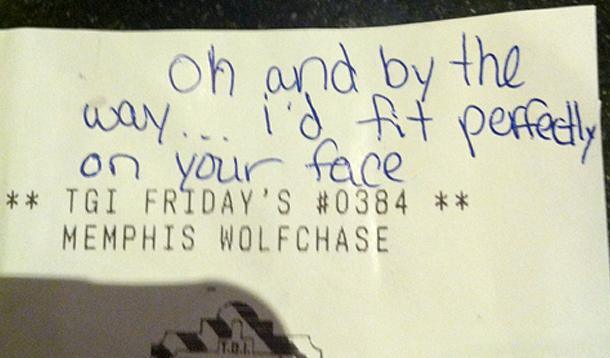 Is there such a thing as a good pick-up line? Probably not. But leaving covert messages on restaurant receipts is becoming an increasingly popular way for servers and clients to express their—shall we say, fondness—for one another.

Case in point: a hastily scribbled note by a customer on a bill for a male server at T.G.I. Fridays in Memphis, Tennessee.

According to an article in the Huffington Post, the client had scrawled in a blue ballpoint: "Oh and by the way... i'd fit perfectly on your face." So no points for subtlety there...

Other noteworthy receipt chat-ups listed on the Post include the burger itemized list, "Best Butt" and "Best Looking," deducting a whopping $0.02 from the total bill.

Another 'friendly' server let it be known via the receipt that other services were on offer: "Michael is always available for one night stands." (I just love how the language mimics that of the burger establishment.)

Not all notes are licentious. Some, unfortunately, use the receipt to communicate racist slurs, such as the New York Papa John's employee who described a customer's "lady chinky eyes."

Ever been propositioned—or thoroughly degraded—by receipt? Do you think this is a legitimate introduction, assuming the text was more charming than the T.G.I.'s example?