FOREGO THE REGULAR DESSERT AND BAKE FRUIT INSTEAD OF PIE 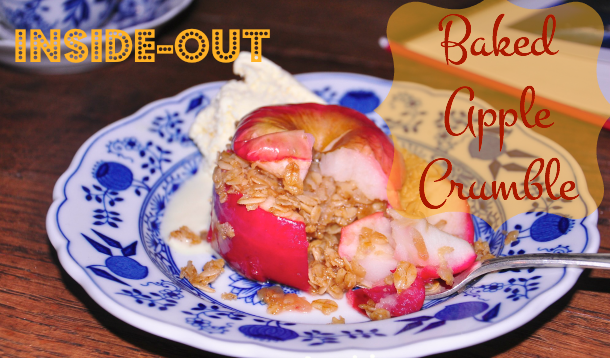 Eyes are bigger than stomachs. It’s a scientific fact, or at least it’s a family dinner overindulgence ohmygod I can’t eat another bite but I’m going to anyway fact. We sit down to share a meal, vowing to watch our portion sizes so that we can enjoy all the dishes, rich with carefully combined flavours, but it’s one more bite of this and another taste of that and then BAM! dessert arrives. Good luck finding room for Great Aunt Felicity’s apple pie now. 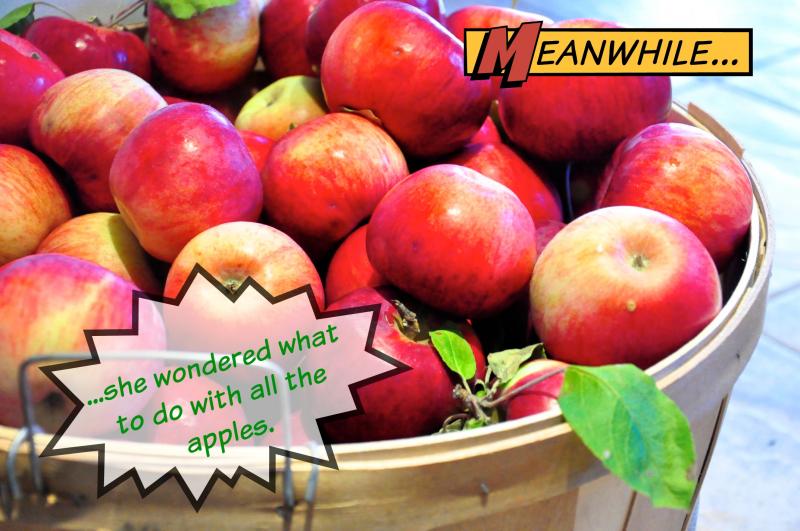 Nobody’s claiming this is a zero calorie version of dessert; I’d never make you eat zero calories anything because I’m not heartless and I want you to enjoy the foods you eat. Good food has calories. That’s another scientific fact. Plus, life is too short to over-analyze everything that passes our lips, except for cheap wine and fake cheese. Please analyze that.

With an inside-out baked apple crumble the focus is the fruit instead of the buttery pastry, but with just the right amount of crumble to keep the recipe firmly planted on the dessert side of the scale and not simply a fruit serving. There’s only so far we can be pushed to observe Canada’s food guide. As a bonus this dessert is super easy to prepare and bakes while you’re enjoying dinner. 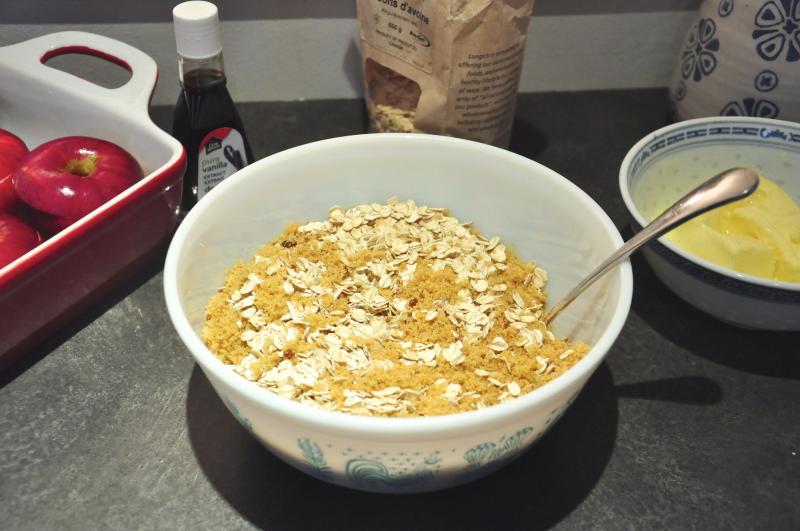 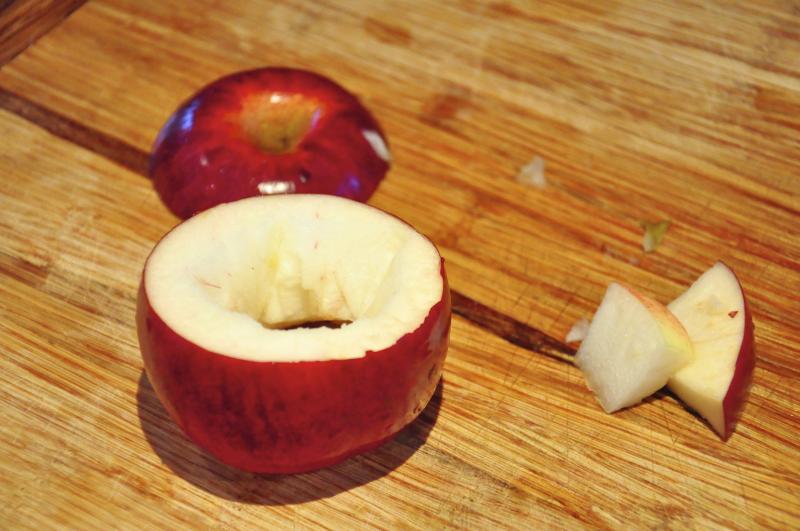 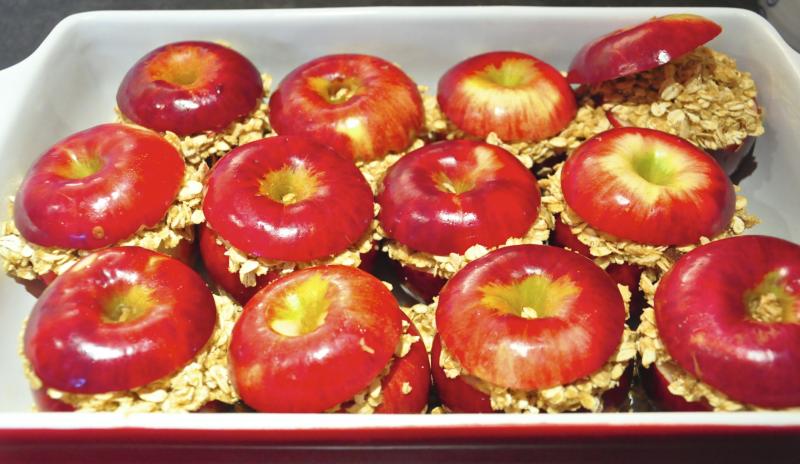 Wash the apples, cut the tops off, and core them.

Cut a wedge of apple from part of the cored portion to close the hole in the bottom of the apple. Set aside the top hat.

Melt the butter for 20-30 seconds in the microwave. Combine the melted butter with the brown sugar and mix well, using a fork.

Add the rolled oats and vanilla and stir until all ingredients are blended.

Fill each cored-out apple with the crumble mixture and cover with the apple top hat.

Bake on the middle rack at 350F for 45-50 minutes. The apples should be soft enough to scoop with a spoon and the crumble bubbly.

Serve on its own or with a scoop of vanilla ice cream. 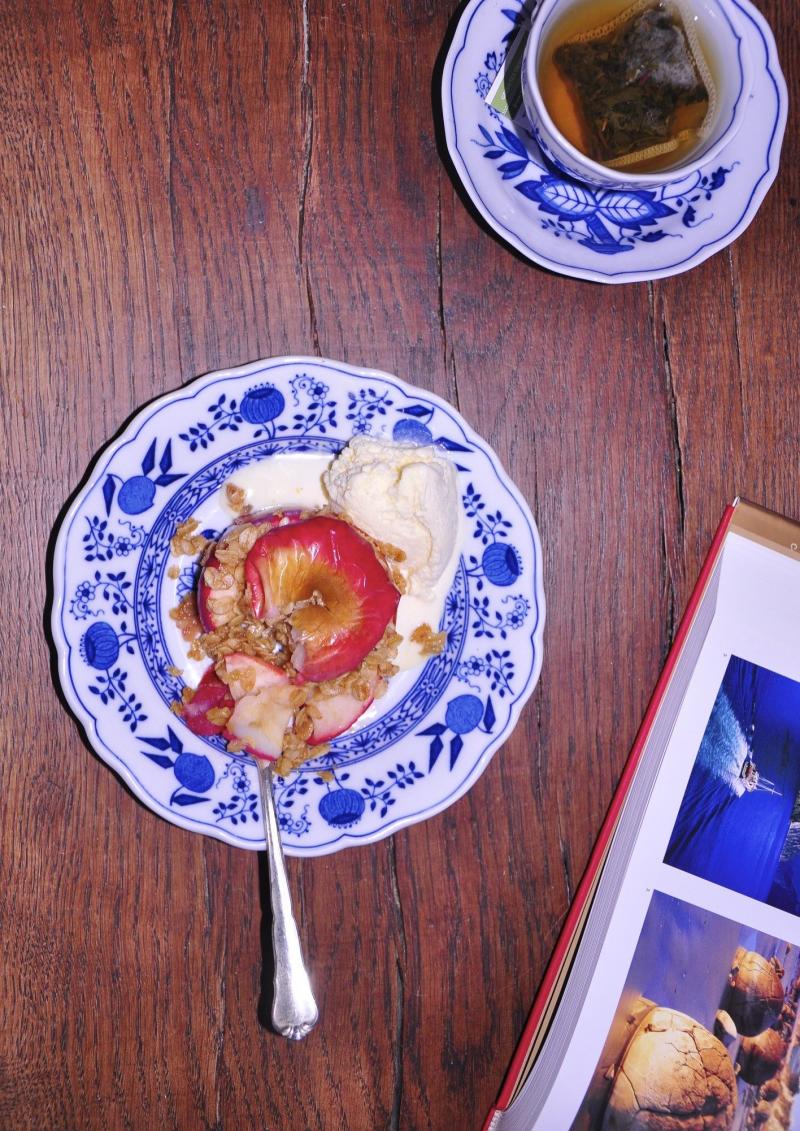 The apple train is leaving the stations, folks, but just in case you missed it…there was caramelized apple cake and vanilla apple jam and slow cooker applesauce. It's been crazy apple town around here and I can't say I'm sorry.

ALL YOU NEED ARE THREE INGREDIENTS TO MAKE THIS TASTY DESSERT 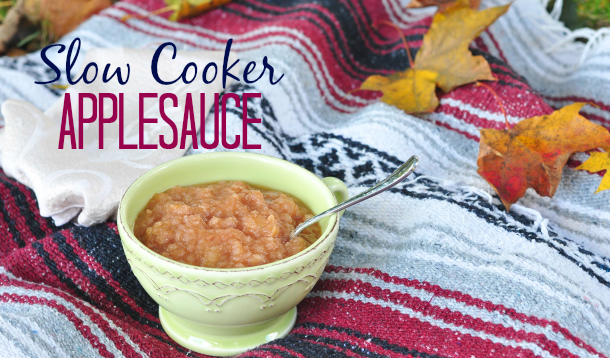 Ontario has had an exceptional apple season this year and it's been apples all day, every day around here and, well, I’ve gone a little crazy with my apple menu.

I make no apologies because clearly I’m not alone considering all the recipes floating around, and it can’t be a bad thing that my children reach into the bushel sitting on the kitchen floor for their afternoon snacks instead of into a cookie jar. Is there such a thing as an apple overdose? Because we’re probably close.

This is the part where you wonder how such perfect children came about who would choose apples over cookies and where I confess that my favourite day of the school week is pizza lunch day, followed closely by the day my teenage son brings money to school and goes out with friends, where he is decidedly not eating apples. He doesn’t tell me where they lunch, but if I were to guess I'd say it involves grease and rubbery meat and crap I wouldn't approve of. I pretend not to know that he’s making poor food choices. Kids need some rebellion and if eating the occasional fast food gut-bomb is part of it, he can have at it. I just keep a ready supply of healthy food at home — apples — as well as a supply of probiotics.

It doesn't get easier than this recipe: three ingredients + one slow cooker = a delicious dessert. The orange juice adds just enough sweetness to minimize any acidity from the apples, as well as liquid so that nothing sticks. 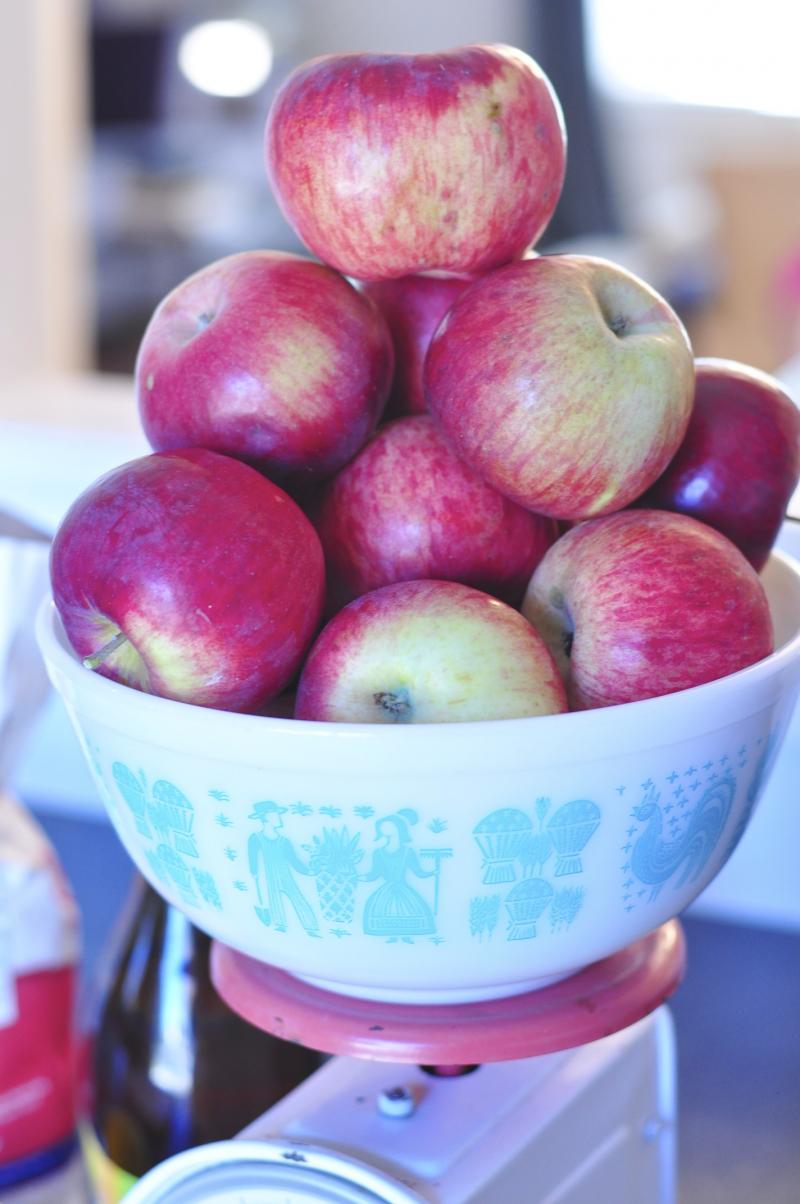 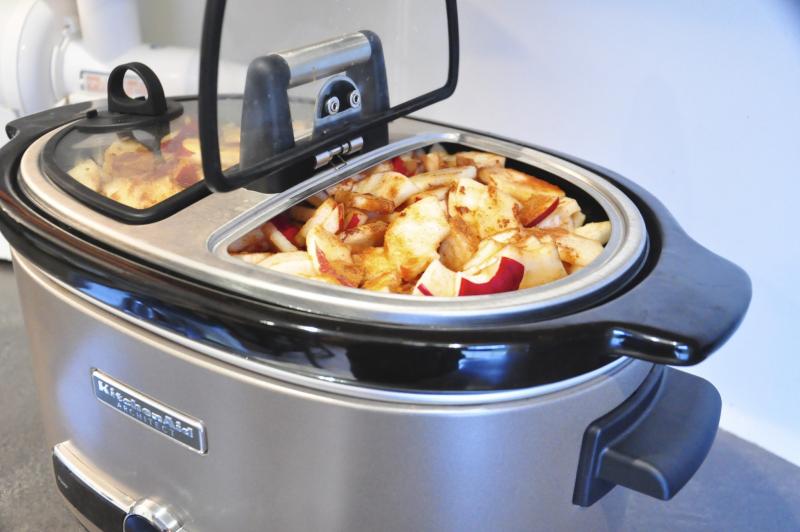 Wash, peel, core, and slice the apples. Use a corer/slicer if you have one.

Put the apple slices into the crockpot. Sprinkle the cinnamon over top and finish with the orange juice.

Stir gently to distribute the cinnamon and set the slow cooker to low for six hours.

Walk away and forget it.

Once the cooking time is complete, give a final stir and then use a potato masher to get the desired consistency.

Refrigerate once cooled or conserve by canning what can't be eaten during the week. 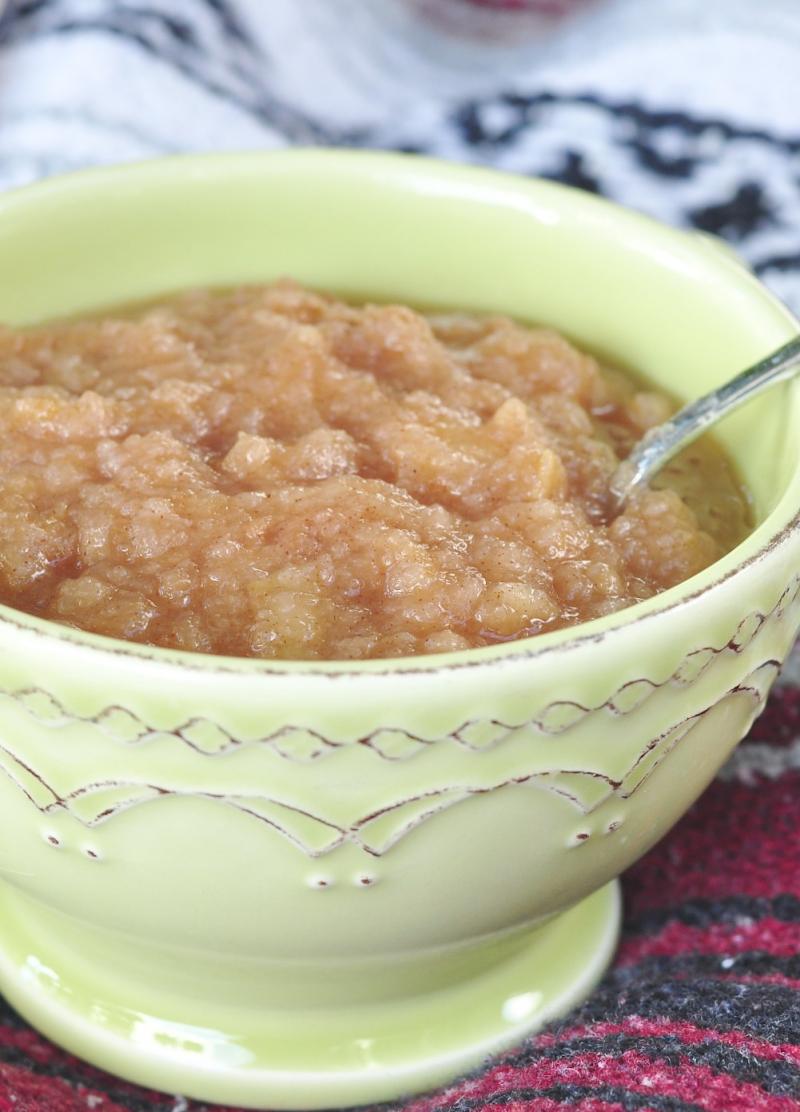 Make this family favourite caramelized apple cake to squeeze all the goodness out of the season. 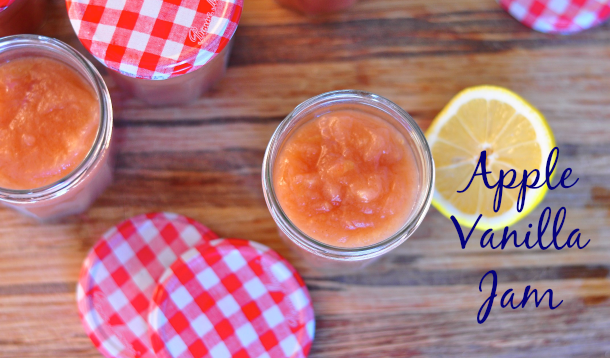 A favourite fall tradition in many parts of Canada is to head out to a local orchard to pick apples. We do the same every year and always come home with a bushel because — like many moms — I have PLANS and TO-DO LISTS and a skewed idea of just how much I can get done in a limited time. Hands up if this sounds familiar.

Apple season is great because apples are such a versatile fruit and can be used in savoury or sweet recipes or for canning, and we can enjoy them when the snow is swirling outside and we’ve forgotten what the colour green looks like. 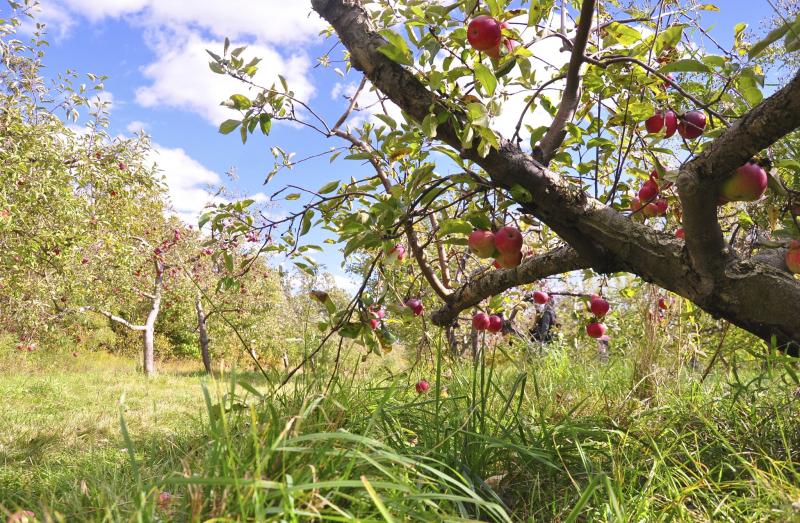 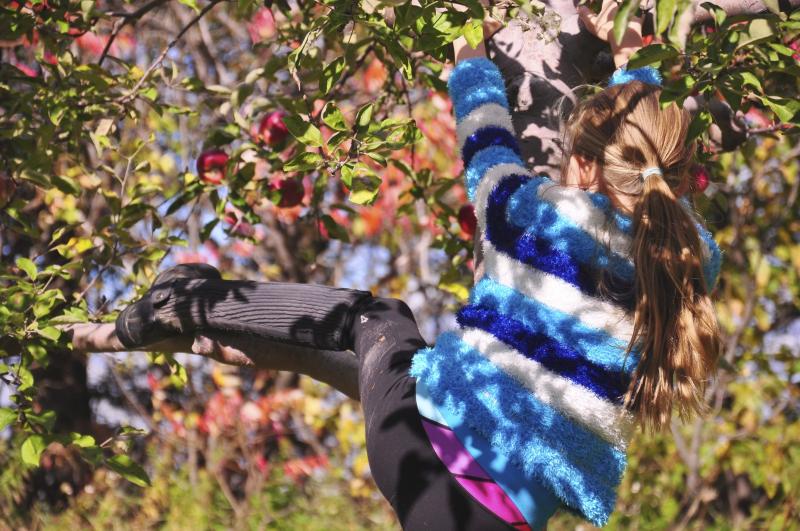 I began making apple jam by accident several years ago when I cooked the applesauce too long; it was a happy accident. I then threw in the secret ingredient that takes desserts and jams from pretty good to Woah, baby! — vanilla — a few dashes of cinnamon, vinegar, and lemon juice to change the consistency and flavour, and we now enjoy apple vanilla jam long after the season has ended. 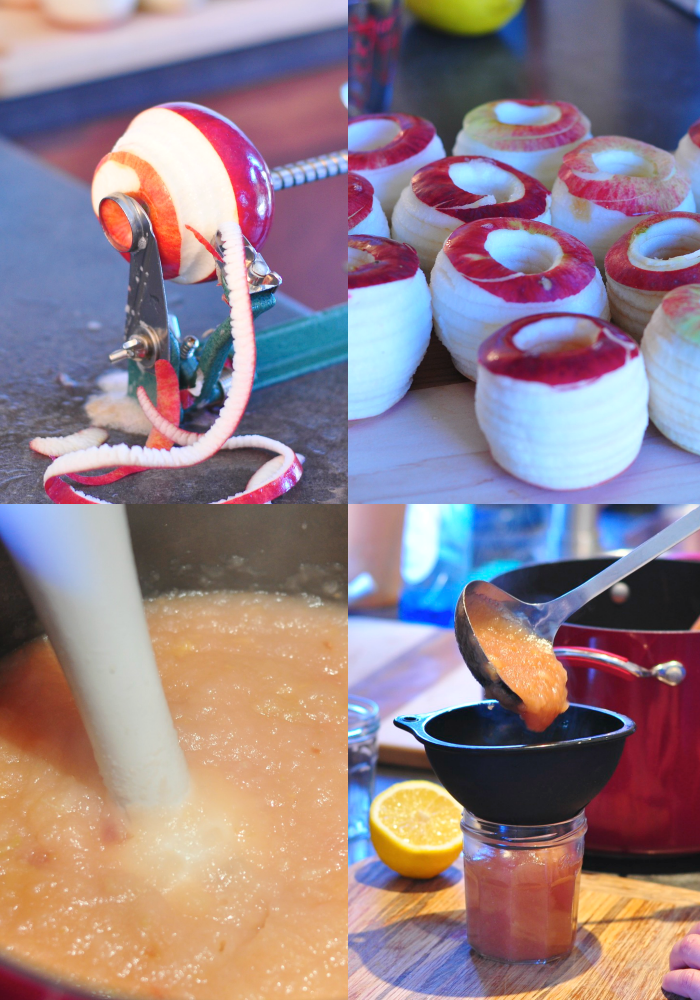 Wash, peel, core, and slice the apples using an apple corer/slicer if you have one, or by hand.*

Throw the slices of apples into a large pot and add the water and vinegar. Cover and cook over medium-high heat.

Sterilize 7-8 250 mL jars in boiling water while the apples cook. I reuse old jam jars, but you can use canning jars, too.

Allow the apples to slowly boil and stir occasionally so that no pieces stick to the bottom.

Cook for approximately 30-35 minutes until the apples are soft and then purée them with a hand blender. Alternatively, you can use a potato masher and some elbow grease to get the desired consistency.

Once the apples are puréed add the sugar, vanilla, cinnamon, and lemon juice and stir well. Simmer the purée with the lid of the pot off to allow for evaporation — and stirring a few times to prevent sticking — for another 15 minutes. Remove from heat.

Fill the sterilized jars to 1 cm below rim using a ladle and funnel. Close the lids and place the jars in a pot of boiling water so that they are submersed in water. Allow to boil for at least ten minutes.

Remove from water, dry the jars, and place them on a cooling rack. The lids will pop once the jars are vacuum-sealed. This can take several minutes to several hours.

Vacuum-sealed jars can be labelled and put in the cupboard once completely cooled. Any jam jars whose lids haven’t popped should be refrigerated and eaten first.

We save the cores and apple peels for pony treats, so zero waste.

* Tip: Spend $20 to buy an apple parer/corer/slicer. I bought mine at Home Hardware, but any kitchen supply store should carry them. It’s so worth it if you cook and bake with apples because it makes life easier and we could all use some shortcuts. Bonus: It’s fun to use, kids like using gadgets when helping in the kitchen, and this is an old school, non-tech gadget.

For a delicious apple dessert try replacing the blueberries and peaches for apples in this crumble recipe to keep things seasonal. 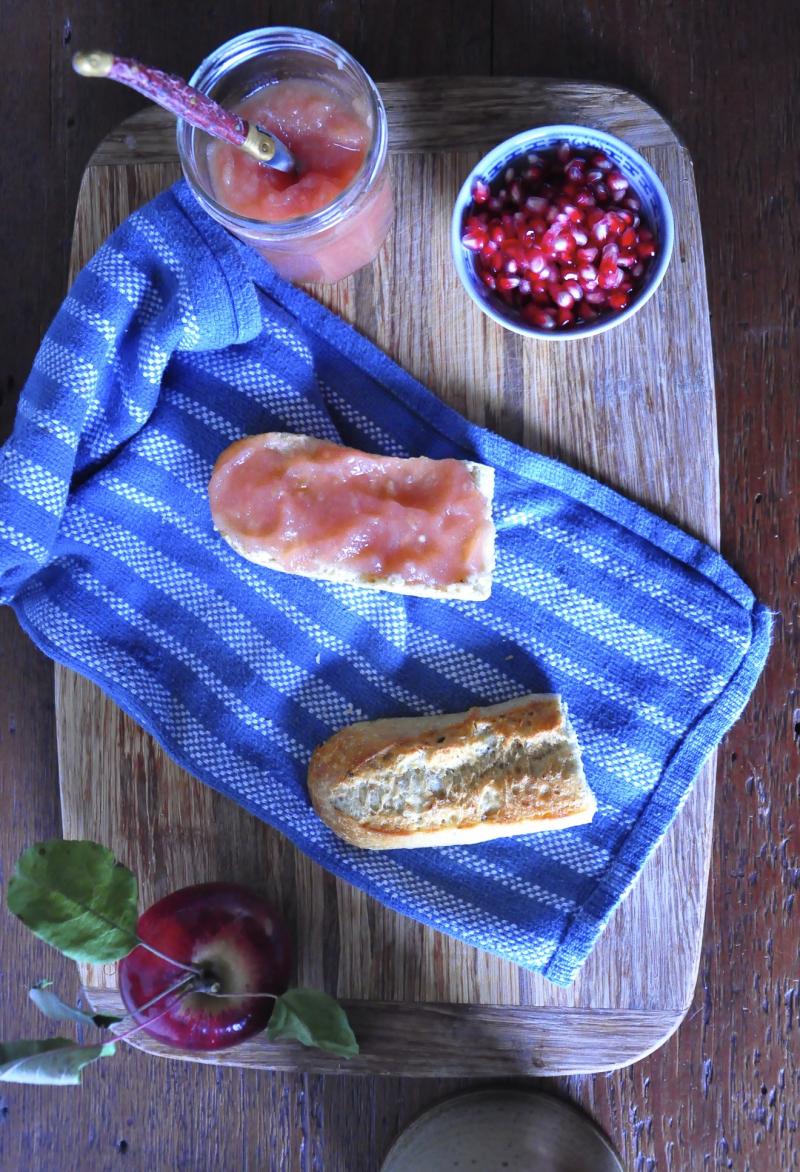