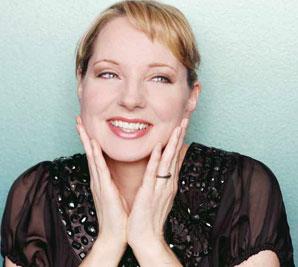 Jessica Holmes, a favourite on CBC’s Royal Canadian Air Farce, has brought the house down opening for such comedians as Jerry Seinfeld, Leslie Nielsen and Ellen DeGeneres. She always leaves audiences in stitches with her interactive humour and vivacious energy. She recently performed in two televised comedy specials at Just for Laughs and the Winnipeg Comedy Festival.

Her one-hour comedy special, “Holmes Alone” won a 2001 Platinum Award at the Worldfest International Film Festival and was nominated for a Gemini Award. Her work on the Second City production “The Best of the Very Last” earned her a nomination for the prestigious Tim Sims Scholarship. Holmes is also known for her work on The Comedy Network and CTV’s hilarious, edgy, Carol Burnett-style sketch comedy, The Holmes Show. She has appeared in such films as Welcome to Mooseport and Citizen Duane. Additionally, Holmes’ motivational comedy book, I Love Your Laugh, was published in October 2010.

Holmes’ comedic high jinks and crazy antics, her knack for skewering celebrities such as Céline Dion and Britney Spears, along with her original creations, amuse even the most straight-faced audiences. Her grace, bilingualism, and ability to react on the fly make her a natural choice for M.C. Whether hosting or performing her hilarious characters, Holmes always leaves the audience in stitches.

In 2011, Holmes studied to become a Wellness Coach, and now mixes humour with a message about de-stressing and laughing at life’s shortcomings. She was recently invited to host the Toronto stop of Oprah’s Lifeclass: The Tour. Jessica speaks with humanity, intelligence and humour on her own experiences dealing with post-partum depression, finding work/life balance, and re-igniting passion.