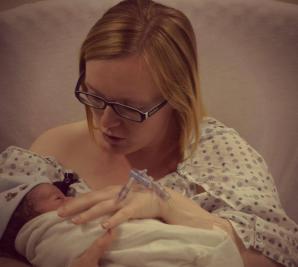 Tasha Gandevia is a nearly-thirty (gulp!) year old mom to 1.5 boys and wife to a wonderful hubsand who only drives her batsh*t crazy once in a while.
After being a nanny for nearly ten years, she had her first child. The plan was to only have one, but 18 months after baby was born, her and her husband decided to take the plunge into double-trouble.
She's excited to be a SAHM later in 2014 and spend her days with her boys and blogging about it!

About my kids:
I have a nearly-two-year-old spunky little monster who loves to strip, table dance and keep me busy! He's always on the move... I'm due in October with my second baby - another little boy! This one is always on the move as well. Or at least it feels like that when I am trying to sleep at night. He's feisty already and likes to make his presence known.
Parenting is...:
like explosive diarrhea - you never know when it's going to get messy. (Too much?)
We know you don't have a lot, but when you do, what do you like to do in your spare time?:
In my spare time I like to play with my son, garden, go on a date with my husband, blog or attempt to read a book.
When are you at your yummiest?:
When I've had a solid eight hours of sleep and I've had some spare time to pamper myself with a trip to the spa... I make due after 5 hours of sleep and not having been to the spa for 2 years though.
What's currently in your purse?:
... I don't even know where my purse is, actually. I have a backpack for work and a diaper bag for when I'm not working. I'm stylish like that.
What superhero power would you like to have?:
Speed - Imagine how much procrastination I could do if I could do it quicker!
If we gave you an elephant, where would you hide it?:
My driveway. Claim it's a new style of car.
Do you have a blog or website? :
http://crushedcheerios.wordpress.com
Twitter Handle:
CrushedCheerios