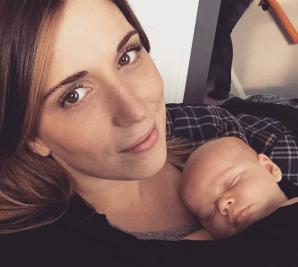 Rhiannon Archer is a standup comedian, actress and writer hailing from Toronto Canada.

Named one of “Six Hilarious Female Comedians You Don't Know Yet—But Should” By BitchMedia, she has been a part of many comedy festivals throughout North America. In addition, she has been nominated for 2 Canadian Comedy Award for Best Newcomer and Best Comedy short, One Woman Show, which she wrote and was the lead role.

She cannot do mathematics under pressure and lives with her husband, a baby and dog "Beefy". She enjoys sour keys and dislikes muchrooms.

About my kids:
I have one son named Jude. He was born in December 2015
Parenting is...:
Surprising!
We know you don't have a lot, but when you do, what do you like to do in your spare time?:
I write and preform stand up comedy and trying to remember where I have left my phone
When are you at your yummiest?:
The real question is - when am I not at my yummiest????
If someone wrote a biography about you, what would be the title?:
"Whats the worst that can happen?" The Rhiannon Archer Story
What's currently in your purse?:
Remnants of a life when I didn't have my son because now my wallet, phone and keys live in my diaper bag.
What superhero power would you like to have?:
Flight
If we gave you an elephant, where would you hide it?:
In an Elephant field?
Do you have a blog or website? :
http://theobliviouschildblog.tumblr.com/
Twitter Handle:
@rhiannonarcher