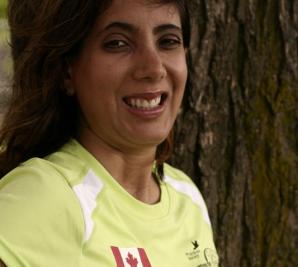 Lynn Manwar was born and raised in Toronto, Canada.  She is of a mixed heritage of West Indian/German/English roots.

She launched Wellness Detective in 2011, an online business dedicated to providing health and wellness solutions.

She has been featured in media such as Metro, Anokhi Magazine, Desi News, Eye Weekly, Masalamommas.com, The Bulletin, Suhaag.com, thatchannel.com and Good News Toronto. Her TV debut was as a makeover candidate on "Style by Jury" on W Network in Canada in 2007. She was featured on "Badhai Ho" on OMNI TV in June 2012.

Lynn's personal inspiring story is featured in “Making it in High Heels 2: For Leaders and Role Models”(2009) by Burman Books.  She has overcome cancer twice and arthritis.  Having gone through fertility preservation in January 2012 before she started cancer treatment, her goal is to be a mother!

Parenting is...:
one of my goals.
We know you don't have a lot, but when you do, what do you like to do in your spare time?:
Watch movies
When are you at your yummiest?:
When I am relaxed.
If someone wrote a biography about you, what would be the title?:
Secret Daughter of a Well Known Canadian Architect
What's currently in your purse?:
Jerusalem Cross and makeup.
What superhero power would you like to have?:
Healing.
If we gave you an elephant, where would you hide it?:
In my bedroom, where I currently have 4 hiding!
Do you have a blog or website? :
http://lynnmanwar.com
Twitter Handle:
http://www.twitter.com/WellnessD