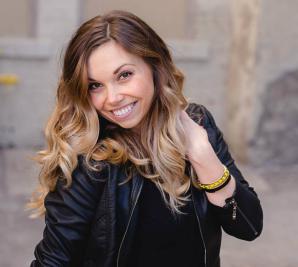 When Joanna became a mom, she happily left her big city Interior Design job behind, embarking on what she thought would be the most incredible years of her life… motherhood.

Little did Joanna know that motherhood had some surprises in store for her, including her son’s language delay, postpartum depression after having her daughter and secondary infertility eventually resulting in her having spontaneous twin girls. If you kept count, that’s four children in five years.

During Joanna’s incredibly difficult twin pregnancy, she found herself extremely isolated and lonely. This inspired Joanna to start a parenting blog once her babies were born. Ever since, Nesting Story has been giving other mothers a “fly on the wall” look into her life.

These very raw, but inspirational stories about motherhood, self-rediscovery, body after baby and marriage have been helping mothers feel a little less alone and a little more normal ever since.

In March of 2015, Joanna’s blog went viral world wide, and was featured on websites such as People Magazine, Cosmopolitan, Today and many more. Joanna also blogs for Baby Center US. Follow her on Instagram @nestingstory, Facebook, or Twitter @NestingStory.