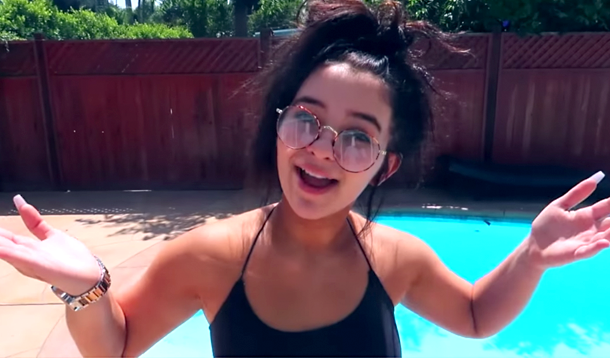 “Dear Mini Pops, please can I be in your group?”

This was the beginning of a letter I wrote to the pint-sized cover band when I was nine. They were less kid-friendly then. As I adult, I shudder when I watch old clips of eight-year-olds in bright red lipstick and bathrobes singing about making love, but as a kid, I was blissfully unaware of its creep-factor, and I adored them, singing along to the music and moving through the dance moves in my own clunky way.

The Mini Pops are no longer sexualized, and the songs have highly edited lyrics, but there is a new wave of children acting like grown-ups for our kids to admire and try to emulate: YouTube stars and child influencers.

It used to be, when you asked a kid who they idolized, they listed actors, musicians, and athletes. So when I asked this of my own ten-year-old, I was shocked to hear him say he aspired to be a YouTube star. He doesn’t pretend to be an actor, as I did, but rather he plans out his future YouTube channel. He has even chosen a handle.

He isn’t alone in this admiration. Ask any given child and they are likely to say similar.

Is that such a bad thing? Isn’t it just the next wave of celebrity? We don’t still worship Vaudeville stars, why should our kids like our style of entertainment? Times change. Initially, this is what I thought. My kids like YouTube Gamers like PopularMMOs and DanTDM, and as long as we make sure the game being played is suitable for children, it’s usually pretty innocuous. They have seen worse on Prime Time. Sure, there are more adult-oriented gamers and other YouTube channels, but that’s our job as parents to make sure what our kids are viewing is appropriate, the same as we do with TV.

But then I watched an episode of “Follow This” on Netflix, documenting tween and young teen YouTube and similar platforms stars, and it disturbed me in a way I haven’t felt since revisiting my nostalgic Mini Pops clips. It showcased Danielle Cohn, a now-fourteen year old influencer.

Danielle became an influencer at just eleven. She now has millions of followers on various forms of social media. She rose to fame on an app called Musical.ly in which users upload short videos of themselves performing along with songs. From her popular lip-synching videos, she launched a single, including a music video, and became a brand.

Tween and teen celebrities are nothing new, nor is it uncommon for these stars to seem older than they are. It’s a problem that has been going on since the silent film era, and likely before. But there was something that really felt off for me watching Danielle. It was that she was “playing” herself.

Unlike the actors and even musicians we watched that played characters, Danielle’s popularity is based solely on herself. This would be fine, except that Danielle comes across as highly sexualized. I am no prude. I am an advocate for banning sexist dress codes, and a huge supporter of in-depth sexual education. I don’t even mind my children watching some mildly racy scenes in movies between consenting adults. But marketing a child through her sexuality feels very exploitive, even if she is the one pushing to do so.

In addition to this, these child YouTube stars often don’t appear to have any discernable talent that would set them apart. They are famous just for being. Yes, this is true of many adult influencers as well, but it seems particularly damaging for children. I don’t love the idea of sending the message to my children that the number of followers you have or likes you get is an indication of your personal value, particularly when you have done little to illicit them.

Since its invention, YouTube has been a place to be discovered. Even Justin Bieber was discovered through it. But the difference between Bieber and Cohn is that Bieber was filmed singing and playing guitar. He was discovered through YouTube, but it was his natural talent that made him famous. YouTube is full of people doing remarkable things, including children, and I do not begrudge them the attention for one moment. Tween influencers are something else entirely; many of them anyway.

I know this is a trend that is unlikely to go anywhere anytime soon. This makes it all the more important for us to monitor what our kids are watching and talk to them about it. As them why they like this person, beyond just “They’re cool.” What makes them cool? Ask your children why they think these influencers are famous, and what makes them so appealing. Ask why these influencers do it, and what they get out of it. Do it non-judgmentally.

The goal is to gain insight into your own child, and open a dialogue, not to make it seem like you are putting down their idols. Use this conversation as a springboard into a discussion about social media popularity not being a meaningful way to gage value or success.

Talk to them about personas, and that while these YouTube stars are representing themselves, not acting in a show, they are very much characters. Danielle Cohn herself told Follow This that she has a persona for the camera. As adults, we realize that there is nothing real about reality stars, but children aren’t always able to separate the two, especially when viewing someone their own age.

Discuss subtle marketing, and how these young celebrities make money off their views. Talk to them about branding.

Media influencers are here to stay – just make sure your kids understand they are being influenced.