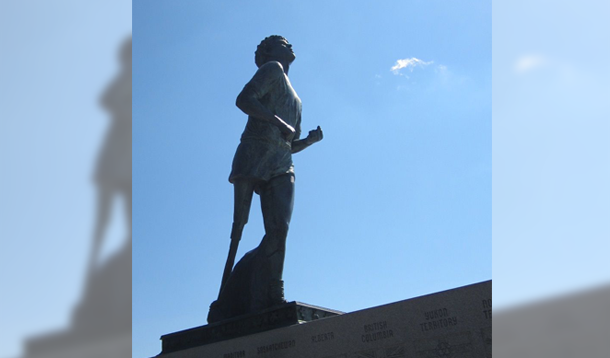 On my wall hangs a painting of a statue. It isn’t by a famous artist, but it is filled with brilliant colours, and more importantly, heart and soul. It was given to my mother by a colleague who knew her love for Terry Fox and her passion for his legacy. When I go to bed at night, and when I wake in the morning, it’s Terry I see, captured in time for eternity mid-run.

When I was an infant, my mom braved the crowds to catch a glimpse of a young hero in the making run through our city. While exciting to be a part of Terry Fox’s journey, she had no idea the impact he would have on her decades later.

At eighteen, Terry Fox had his right leg amputated above his knee to remove a malignant tumour in his leg. Having read about an amputee marathon runner before his surgery, he decided to become a runner. He began training for his Marathon of Hope in February 1979, less than two years after losing his leg. His training involved running over 5,000 kilometres. He wrote to the Canadian Cancer Society, “I’m not a dreamer, and I’m not saying this will initiate any kind of definitive answer to cure cancer, but I believe in miracles. I have to.”

He began his marathon on April 12th, 1980, running and average of 42 kilometres a day. After a 143 days and 5,373 kilometres , Terry was forced to stop running when his cancer returned, appearing in his lungs. While he received treatment, fundraisers were held in his honour, raising more than twenty-four million dollars. This met Terry’s goal of raising one dollar for every person in Canada at that time.

One month shy of his twenty-third birthday, we lost Terry. Two months later, in September of 1981, still mourning his loss, the Terry Fox Run was founded. Over 300,000 people participated at 760 sites in Canada, raising over $3 Million.

As of May 2016, over seven-hundred and fifteen million dollars has been raised for cancer research in Terry’s name.

As a teacher, my mom had participated in the run yearly with her schools. She was always a supporter, but it was living through cancer herself that created a kinship with Terry. In 1996, my mom was diagnosed with leukemia. In 1997, she beat it. Twice. The people on either side of her in the hospital, and the woman down the hall with a big, “You did it, Mom” banner on her door were not so fortunate. That year we saw first hand the devastating effects of cancer, but also the impact of cancer research.

My mom was cured of a disease that would have certainly killed her just ten years before. Innovation had made this cure possible. And in the years since her bone marrow transplant, the survival rate has improved, as has the methods of the treatment. She was keenly aware of Terry’s impact on cancer research. Terry had had a hand in saving her life.

My mom read a book called Run by Eric Walters, a fictionalized story about Terry’s journal that was remarkably faithful to his real experiences. It put a human face on Terry’s run, measuring it in more than just distance.

My mom met Terry’s mom, and had a chance to thank her for her son’s commitment and impact. It was a meeting that would imprint on my mother forever.

When my own son was a toddler, my mother took to the stage at the middle school in which she taught to talk about Terry and the influence he has had on her and so many others. My mother is deathly afraid of public speaking, and to stand in front of the entire school required an incredible amount of courage. She drew strength from Terry’s. She told her students and colleagues that without Terry Fox, she would not have met this young man standing beside her. Since that moment, Terry’s efforts have allowed her to meet four more grandchildren.

For over a decade, my mother didn’t just merely participate in the Terry Fox Run with her school - she championed it. If you open her dresser drawer, you will see a rainbow of Terry Fox T-shirts, one from every year of the run since she became a cancer survivor. Each year, before she retired two years ago, she would tell Terry’s story, and get her students excited for the run. Since retiring, she continues to do it for anyone who will listen.

My own children have taken their cue from her. I asked my then four-year-old who his favourite superhero was. I expected to hear Batman. I told him mine was Superman. He told me his was Terry Fox.

Today is my mother’s birthday. Twenty-two more birthdays than she would have had if it hadn’t been for Terry. The same number of birthdays Terry had in his life. Terry Fox will always hold a special place in our family.

This year, the official Terry Fox Run is on September 16th. To learn more about Terry, and how you can get involved with the run or help continue Terry’s legacy financially and in other ways, please visit terryfox.org.