Does My Midlife Crisis Look Like a Full Back Tattoo to You? 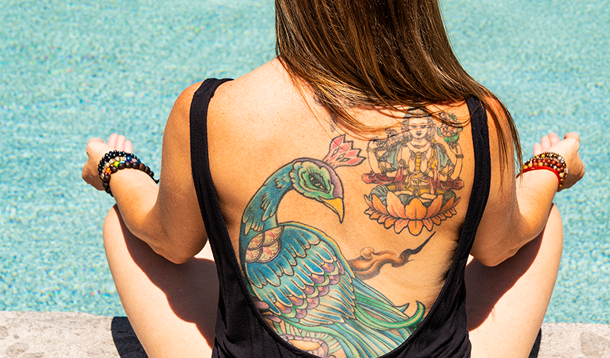 I hit forty last year and it’s like my body said "Cool beans. I can stop trying so hard." I never needed six weeks of physio and three months of osteopathy for an injury incurred whilst turning my head while otherwise sitting on the couch back in my twenties.

Used to be, if I wanted to lose a few pounds, I’d just eat less and exercise a bit. Now, that just keeps me from getting progressively more heavy. A maintenance diet is now strictly counting calories and regular exercise.

I’m pretty sure a single night on a pull out couch doesn’t render teenagers entirely immobile for days later.

Maybe that’s why I’ve been thinking about some big life choices to spice things up a bit and distract me from my otherwise downward trajectory into the latter half of my days.

I’m a pretty vanilla chick. I wear Old Navy and listen to top 40 music most of the time. A crazy night out for me is meeting a girlfriend at the local pub. I is old. I is lame. I is tired.

At the same time, one of the best parts of turning 40 is, aside from the metabolism that is slowing, so too is the rate at which I can give fucks. Because I am running low on fucks, most having been given in mass quantities throughout my younger years, I am now considering things I was once too scared to even consider.

I’m thinking of getting a tattoo.

I know, I know. Big fucking deal. I'm like the last person on earth to get a tattoo. Hear me out. This sounds low hanging fruit and something probably ninety-percent of my friends have already long since done. Hell, my friend’s first tattoo was a full back at thirty-six-years-old. Here I am at forty-one, considering it, and I’m all bad ass, as if this is a deal. But it is for me!

I’m a weenie. I fear needles. My biggest fear of pregnancy was the blood tests, not the birth! Not the having responsibility for a human or two for the next eighteen years. It was the needles. But I’m considering some voluntarily ones, that put permanent art of some sort on my body. Until the end of time.

Is it weird I want one in spite of that? Maybe BECAUSE of that. It’s so out of character for me. So I want to do it! But not just to do it. I want to overcome my fear, and do it with an expression of art. Cheesy? Maybe.

Also, after killing every plant I’ve ever had, after refusing to get an animal that requires any amount of effort because ‘a fish is too much work,’ I’m seriously considering getting a family dog. I’m not oblivious to the work involved. I was forteen when my family got a dog from puppy age. I’ve had two cats as an adult. I know what I’m getting into to a large extent.

But my kids are getting older. As their reliance on me to do all the things decreases, so too does their capability increase to help take on some of the responsibility. I know the brunt will fall on me. I’m the one who’s home. But, I’d love he companion. I’d love the friend for my son who doesn’t tire of his games like I do. I’d love for my daughter to have someone in the house to nurture. She’s not getting the baby sister she wants. She’d LOVE a dog to take care of.

It's silly to say these things are indications of someone looking back on their life and wanting to do something CRAZY. It's more like I am looking at where I am now and thinking 'honestly? what the fuck are you so afraid off. Rip of the bandaid, lame ass! These things are not a big deal!" And it's true. They're not. They were, though. And then I turned 40 and realized maybe it's time to kick off my sensible shoes and live a little.