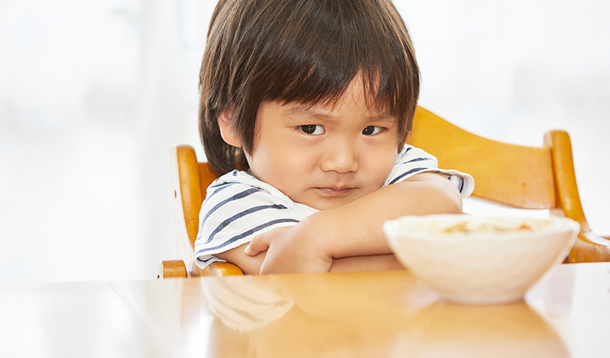 “In my day, we sent our kid to bed hungry if they didn’t eat what was on their plate,” says Aunt Ethel, while your baby throws their peas defiantly on the floor.

According to a recent study, old Aunt Ethel’s advice isn’t very helpful, because pressuring your toddler to eat doesn’t make a difference to their future eating habits.

“Picky Eating, Pressure Feeding, and Growth in Toddlers,” published in the research journal Appetite, measured mother-led pressure feeding and picking eating along with toddler growth. The conclusion of the study, which took a diverse sample of mothers and babies, was that pressure-feeding, picky eating, and toddler growth had no noteworthy relationship.

As a mother to three children, I have been the parent who pressures her kids to eat, and also the parent who throws her hands up in defeat, and feeds my child a chocolate granola bar for breakfast. I’ve heard all kinds of advice on feeding, and have found that very little works to actually encourage feeding with my children.

Most of us know the pure strength and stamina of a toddler, a rumbling belly isn’t going to send them back to their asparagus-filled plate, but it will create a barrier between parent and child, and could lead to more struggles with food in the future.

Naomi Law (RHN), a Guelph-based Holistic Nutritionist based out of Natural Choice Medical Clinic, says that picky eating is a sign that a child is asserting control over their little world. Law encourages that parents offer a variety of healthy choices that the child can choose.

“Forcing the child to eat something is just going to be a battle of wills,” Law said.

There are plenty of gentle ways to coax your child to try new foods, techniques that are recommended by professionals who help parents overcome picky eating.  I learned these strategies when my eldest daughter was diagnosed with sensory processing disorder (SPD), and we started seeing a Pediatric Occupational Therapist who specializes in feeding.

For us, we knew that something wasn’t right when our daughter was gagging on food at one-years-old, and was still eating purees by two. Her picky eating was extreme, and was caused by an actual disconnect between her brain and her ability to process different senses, like textures and flavours in foods.

Having experienced extreme picky eating with my first child, I have had an arsenal of tools with my second and third children. Law, also a mother of three, shared some of her own tips for get kids to try new foods.

“The sooner that a child can get into the kitchen and help prepare foods the better,” suggested Law, who added that having children chop veggies or mix foods in a bowl are great ways to introduce children to food before it’s on a plate.

Law also said that she doesn’t pressure her kids to finish an entire serving of a new food, but she does expect that they bite, chew, and swallow it.

For a neurodiverse child like my oldest, expecting her to eat something new is not recommended. We start with the expectation that she smells and then touches the new food, and slowly work our way to her licking, biting, and eventually chewing and swallowing the new food. It can take months, but persistence and determination is key to getting our kids to try a wide range of foods.

Whether your child is an extreme picky eater, or is simply attempting to assert control, using force to get them to try new foods is not the recommended way to add a rainbow of colour to your child’s plate. Instead, creating fun opportunities to get kids actively involved with their food, and being patient with the process are winning combinations.