Maternal mental health often isn’t addressed or recognized by the professionals who are supposed to be taking care of women. 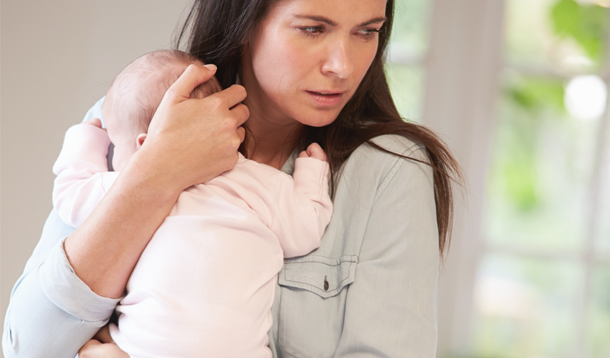 If anyone had been given a snapshot of what was going on in my brain when my postpartum depression hit, I would have been institutionalized. I have no doubt about this. So, when I read the currently viral story about California resident Jessica Porten (whose nurse practitioner allegedly called the cops on her after she admitted some of the thoughts she was having and questioned whether she might be suffering from postpartum depression), I can't help but wonder if I would've been escorted by the cops as well.

In her post, Jessica says the cops then escorted her with police cruisers as she drove with her 4-month-old baby to the ER. Porten was kept there for 10 hours before seeing a social worker, after which she was released. She didn’t see a doctor. She wasn’t prescribed any medication. A follow-up appointment was not scheduled. All she was sent home with was a bunch of papers and her “spirit more broken than ever.”

When PPD hit me, I was about six weeks postpartum. My depression manifested not unlike Porter’s, in that it was anger-based, as well as anxiety-based. I remember taking public transit to my appointment with the social worker, raring for a fight. In my head, I was daring anyone within five feet to jostle me and my baby. I wanted someone to be inconsiderate so I could punch them or yell out my indignation. I wanted to scratch strangers’ eyes out, and sometimes, I wanted to scratch my own relatives’ eyes out. I resented everyone, and I wanted to scream.

In my head, there were alternating images of my new baby being injured or dying accidentally. I was overwhelmed with a certain knowledge he would die from SIDS or I would accidentally smother him one night. There were more things that went through my head than just what I’ve mentioned, but to this day, I have trouble saying them out loud, or writing them.

In my case, I was lucky to be surrounded by incredibly supportive, resourceful medical professionals, family, and friends. Part of this may be because I live in a large metropolis in Canada with a public healthcare system. I had midwives who knew the signs to look for, should my mental health begin to shift for the worse, and I had a team of social workers and psychiatrists who helped me manage my mood until I came to the decision to start medication to mitigate some of my symptoms.

Maternal mental health is a serious part of having a baby that often isn’t addressed or recognized by the professionals who are supposed to be taking care of women. A new mom experiencing disturbing thoughts is not a bad person; she is more likely the product of hormones gone awry. A health professional treating a woman who admits her issues like she’s a villain, bringing in police intervention, is not only inappropriate, it helps no one.

What’s interesting about Porter’s situation is that she is now using her platform to raise awareness about what LGBTQ mothers and women of colour may be undergoing, without the same media coverage. She points out that, as a white cis-gendered woman, she has far more privilege than many others, and she is “scared for our mothers of color [sic] and our LGBTQ mothers who seek out help in these situations.”

Let’s aim to support maternal mental health in all its shapes and forms, shall we?