I'm Not Teaching My Sons That No Means No

Aziz Ansari was accused of sexual misconduct because he didn't recognize the other signs sexual activity wasn't wanted. 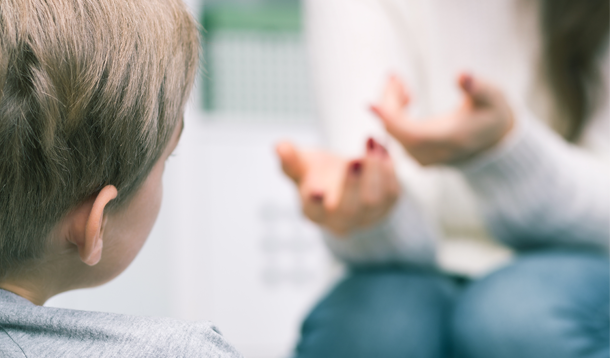 I’m not teaching my sons that “no means no,” and you shouldn’t either.

I get this is shocking, but hear me out. I’m not teaching my sons that no means no, because it implies that everything else means yes, and that unless a person explicitly says no, sexual advances are fair game.

Does it sound like I am grasping at straws here and not giving people enough credit? I wish that were the case, but something happened yesterday that solidified in my mind the need to ditch “no means no.”

At this point, accusations of predatory sexual behaviour against men in Hollywood are not super surprising. By and large, I have not been shocked by any of the names that have come across my computer screen.

But last night, I opened Twitter and saw “Aziz Ansari accused of sexual misconduct” and I audibly gasped. Aziz has not only been one of my favourite artists for some time, but I have admired his outspokenness on feminism and his support for women’s rights. I have always seen him as a champion of our cause, and this broke my heart.

The initial comments I read seemed to imply that the accusations were a blatant example of false victimhood. I’m cautious about victim-blaming, but I desperately wanted this accusation to be untrue, so I read his accuser’s story, hoping to see the obvious falsehood that others saw.

I saw a story that was not a cut and dry sexual assault case, but it was far from okay.

“Grace,” his accuser, recounted meeting Aziz at a party, giving him her number, and later meeting up for a date that ended with returning to Aziz’s apartment.

Aziz quickly initiated sexual activities with Grace, placing her on the kitchen counter, and advancing quickly into sexual acts. Grace voiced her discomfort with how quickly things were moving and requested they chill a little. Aziz performed oral sex on her and requested the same in return. Grace briefly complied.

Grace stated that as Aziz attempted to progress sexually, she gave him non-verbal clues she was not into it, such as moving her hand away when he repeatedly tried to place it on his genitals, and turning “cold” by stopping moving her lips.

She indicated verbally that she was not enjoying the sexual activities as well. When Aziz asked her where she wanted to have sex, she said, “Next time,” and Aziz asked her, “If I poured you another glass of wine right now, would it count as our second date?” Grace excused herself to the bathroom. When she returned, Aziz asked her if she was okay, and she told him she didn’t want to feel forced. At first, Aziz was understanding and acknowledged they both needed to be into it, suggesting they just chill on the couch.

Though initially comforted by this response, Grace was put on the spot again when Aziz pointed to his genitals and motioned for her to provide him with oral sex again. Feeling pressured, Grace complied. Several more times, Grace indicated she was uncomfortable and wanted to slow down, Aziz seemed to understand, and then aggressively pursued sexual acts again. Grace left, feeling pressured and violated. In a text, she later told him again how uncomfortable she had been. Aziz texted back that he had misread the situation and was truly sorry. Grace’s full story can be found here.

Aziz has since issued a statement confirming the encounter to be real, but stating that he believed at the time that the sex was consensual and that he continues to stand behind the #MeToo and #TimesUp movements.

Nearly exclusively, comments have focused on the fact that Grace never explicitly used the word “No.”

Women who are self-proclaimed “real” survivors of sexual assault chastise Grace for diluting the word victim. Statement after statement call this a bad date, not a case of sexual misconduct, placing the blame on a combination of Aziz being socially awkward and Grace failing to “just leave.”

Writer Anne T. Donahue put it perfectly when she said, “It doesn’t ‘ruin the mood’ to check in and make sure someone still wants to participate. Note: if it DOES ‘ruin the mood’ for you to check in and make sure somebody still wants to participate, have a long word with yourself. Begin with asking why what you want ranks above someone’s mental/emotional/physical safety.”

I have no reason to believe that Aziz is being disingenuous when he says that he believed his actions were consensual. Unlike many of the other men who have been called out, I have not seen anyone calling for him to lose his job or be arrested. That this was a misunderstanding seems likely, but that doesn’t make it acceptable, and in many ways is indicative of a much bigger problem.

Aziz is (supposed to be) one of the “good ones.” He’s the nice guy every woman hopes to meet. But even he did not recognize the signs that he was pressuring someone into unwanted sexual activity, because she did not say “no.”

Placing the onus on a person to stop sex instead of placing it on a person to make sure the sex is wanted and welcome is backwards. There are many reasons that someone may not feel comfortable blatantly saying “no,” but there are no reasons to not explicitly ask if consent is being given.

Many things can mean no, but only yes means yes.

I am teaching them that clear consent comes before all else.

RELATED: Dear Son, You're Not Entitled to Rape