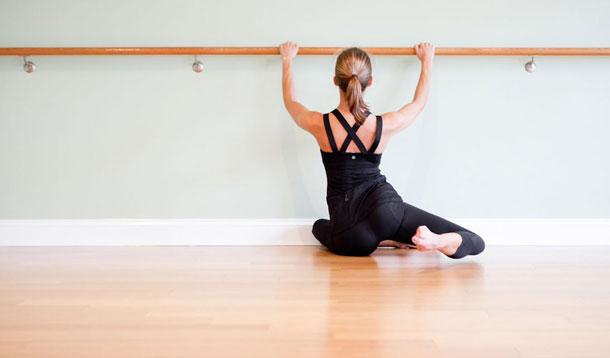 Apart from the few weeks of tap I took when I was 10, the social dance component of my high school Phys Ed course, and the speaker dance era of my 20s, I haven't danced much. Those girls of my childhood with the long lithe bodies who always seemed to be well groomed and extra clean were a sharp contrast to the ones I grew up with. We were tomboys who played sports, had bruised bodies, and knots in our hair. Dance just didn't interest me, but I had to admit, I did admire how these dancers looked—lean, but strong—and as they grew up, they seemed to maintain their posture and perky bodies. Even the expression of "I used to be a dancer" was attractive enough that I wished I had more exposure to it.

In my 30s, I started a family, and, like many women, I needed to get back in shape after I had my kids. I did the standard gym workouts for a while, because that was my comfort zone. They were fine and did the job, but I didn't love going. I decided to try fitness classes instead, and while I worked harder, I didn't have fun with it and so i only lasted a few sessions. I needed something to inspire me. Something to motivate me. Something new that would satisfy my expectations of a good workout and leave me feeling uplifted and energized. Enter Barre.

I had seen a few places around town that offered classes, and was curious about the workout and what it was like. I bit the bullet and signed up for my first class. It didn't go particularly well. I was a little lost at first (what the heck was "first position"???), was far from graceful, and wondered if I was making a fool out of myself. But then I looked around and realized that the majority of the women in my class were in the same boat. They weren't experts, either. They had questions, they missed steps, they were breathing just as hard as I was. I felt encouraged. And I felt something else the next day—muscle soreness in the areas I wanted to work the most (i.e. my legs, butt, and core). I hadn't felt that in a long time, and I knew that I would be back.

After a few weeks, I actually started to feel like a dancer. I picked up some cute new workout gear and I began to look like a dancer, too. It wasn't long before I was hooked! My weekly classes became bi-weekly, and I found myself doing the movements at home on my own in between. Barre changes your body. It builds your strength, flexibility, and, somehow, manages to "lift" everything just that little bit more than traditional workouts. It's like an anti-aging system for the body.

Barre feeds the body, mind, and soul. I know I’ll never be a prima ballerina, but if I can look and feel like one, that’s good enough for me.

Want to build strength and increase flexibility to maintain your stability? Here are 9 yoga poses to improve your balance.

Check out this workout gear—it's so cute, you'll WANT to hit the gym!

Theresa Toth
My two loves are Food & Fitness. Bringing that together into businesses that let me be creative with my time is a dream come true! Easy Peasy Eats was where it started. A simple blog became a published cookbook, the cookbook became a Recipe Remix series for City TV and a brand spokesperson for various companies. Food became my whole life! Next came Jolt Nutrition. Both of my kids are involved in sport and I noticed that they didn't have a good sense of what to eat in terms of fuelling their bodies, proper hydration and recovery. I partnered with the academic community to create workshops for kids & youth that would be engaging and fun, and to support physical education and comprehensive school health. Essentially, I teach them how to excel through proper nutrition, taking their performance goals to the next level. Then the pandemic hit. Time to pivot again as guest speakers were not allowed in schools and sport had halted altogether. I didn't want to play the waiting game. Pilates was something I had done for years in one form or another so I become certified as a Stott Pilates® instructor. Teaching classes for both adults & kids is so fulfilling, and has become the gift I never expected, helping me understand my own body like never before. Life will take you in directions you never plan for sometimes. And I am so grateful it has!