No, We Will Not Turn it Down: The Importance of Teens Pursuing Passion

The Kids Are Alright 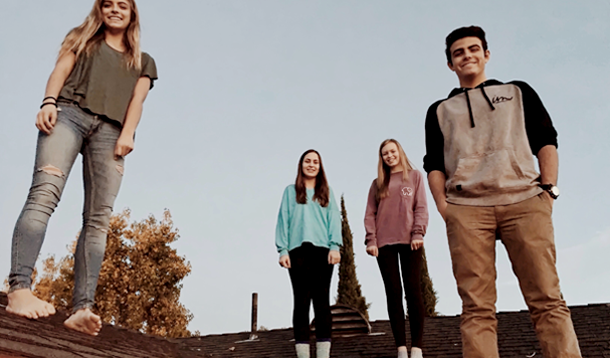 It was the kind of night summer dreams are made of: a beautiful and charming Italian man cooking dinner on the grill, a smart and engaging, highly accomplished woman telling stories and sharing insights, and me, actively consuming both.

The woman’s sixteen-year-old son and his friends were upstairs on the third floor of her house, jamming and rehearsing for an upcoming gig in downtown Toronto; these guys were good.  Like really good.  Like, so good they’ve produced one album, are working on recording a second (all original tracks), and have been featured on Spotify as an artist to watch.

As we sat in the yard figuring out grown up stuff like “what it all means” and how wonderful the quality of relationships are after you’ve weathered a divorce, they played; they played, and we listened, and it felt like we had discovered the gem of live and unexpected music in west end Toronto.

A neighbour came to the fence, asking when and where he could buy their album, and if they could please never stop playing, on account of how much he loved their sound. Then another neighbour came over, this time right into the yard, and asked the mom to ask her kids to shut the windows, turn it off, and dial it down, as they were disturbing the peace of the neighbourhood.

And she said no.

She said no in the most intelligent, graceful, and unapologetic way: pointing out that it was only 8:00 p.m., and that her family was always respectful of timing and never let the kids play past 10:00 p.m., per the municipal bylaw.

She also pointed out that this same neighbour was undergoing several renovations through the day that were far more of a noise violation to the outdoor peace, and that this was what life sounded like - kids playing; in this case playing music, but not unlike young kids playing in the street or yard, giggling, shouting, running though the sprinkler and having fun.

It was a very civil engagement, and she very honestly said she’d ask them to lower the amp, but would not ask them to stop, period.  He thanked her and left, and our conversation turned to how, when you think about it, this was an almost laughable request.

But here they were, sober and at home, writing and rehearsing winsome, contemporary folk and on point jazz…pissing people off.

I got to thinking that teenagers must feel like they don’t “belong” anywhere. They’re too old for childhood, and too young for adulthood, have a foot in each camp, but aren’t fully welcome in either place, and are actively criticized for leaving one too soon or entering the other too early.

We speak almost ad nauseum about the village, and how we each have a responsibility to each other’s families, and each other’s children; well guess what folks - that village includes our teenagers.

That village includes support for a group of children, learning to be adults, whose hormones and rapid body development is nearly identical to that of toddlers, but this time on a larger scale (and with the gift of more language, which can escalate easily into more attitude).

That village includes support for kids who are in the process of taking everything they’ve seen, everything, they’ve felt and learned, and trying to process it against the world they live in now, and using that process as a means to carve out a place for themselves in it.

Our support doesn’t end for each others’ families, and for our community, just because someone reaches a certain age - or because they have the audacity to prepare for a burgeoning career that disturbs the volume on our primetime Netflix binge.

Mentorship is a highly undervalued practice and art, and we can each do our part for our own family and extensions thereof by stopping to appreciate that teens and their parents are figuring it out as they go, and that to support them, we need to check our own unfair or misplaced judgements at the door.

And choose to either close your own windows, or lean into the magic happening around you.

(In case you choose the latter, you’re going to want to check out The Neighbourhood Watch, who hails from the West end of downtown Toronto, and listen to this. )