Vacationing At The Breakers Resort

The Best of Palm Beach, Florida 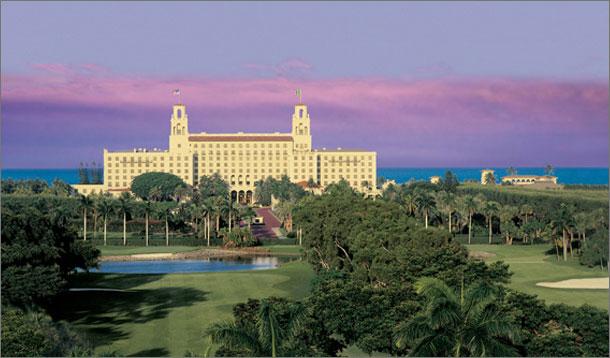 A Florida vacation with the grandparents conjures up images of a sprawling gated low-rise community populated by massive white sedans patrolling the grounds like a school of geriatric sharks. Activities might include a round of shuffleboard or a collection of Mah-jong tiles. A dip in the pool is bound to be accompanied by repeated admonitions to keep the splashing to a minimum and the voices suitably hushed.

And yet here I am standing at the valet of The Breakers resort in Palm Beach. Behind me, a mile of perfectly manicured palm trees stand at attention like a column of Roman legionnaire spearmen. In front of me the white-washed walls and coffered ceiling of the vast hotel lobby loom against the backdrop of the Florida sky. 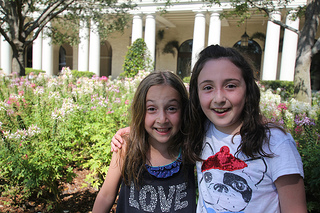 Business men and women in Italian suits clutching Corinthian leather briefcases mingle seamlessly with inter-generational families decked out in Hugo Boss chinos and Armani swimwear. The parking lot is peppered with BMWs, Maseratis, and the occasional Rolls. I have yet to spot a white Crown Victoria anywhere. It’s approaching 4:00 p.m. and there’s no line-up for the early-bird dinner buffet. My cheeks haven’t even been pinched.

This is definitely not my Bubbie’s Florida 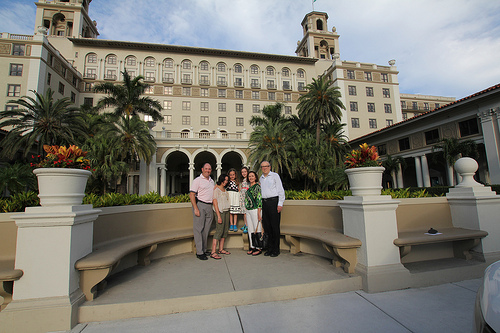 Travelling with my two daughters (ages nine and seven) is always a rewarding (and sometimes stressful) experience. Travelling with my two children and my two parents was an unknown quantity with the potential for disaster on an epic scale. Pleasing a group that includes a seven year old is no small feat.  Add a pair of newly-minted senior citizens to the mix and you’ve got a real diversity of opinions to challenge your vacation needs. With a property dating back to 1896 built as a magnificent homage to 15th century Italian renaissance architecture, I could be forgiven for my initial thought that this holiday was going to be better suited to the well-aged slice of my sandwich generation.

I pulled my rented minivan up to the valet, leaving it wallowing in inadequacy between the Bentley and Porsche humming on either side. The kids tumbled out past the central fountain modeled on Florence’s Boboli Gardens, trailed at a more leisurely pace by my parents into the shadow of the grand lobby inspired by Genoa’s Great Hall in the Palazzo Carega. I began the check-in process while my wife subtly hissed at our girls who were involved in a race around a stone plinth capped off by a vase that would not look out of place in Versailles. “Don’t touch anything that looks expensive!” she whispered. “In fact, just don’t touch anything since it all looks expensive!”

I only began to exhale when the amiable front desk clerk produced a fishbowl full of brightly coloured rubber bracelets and invited the girls to choose their favourites. This was followed by a pair of adorable back-packs stuffed with treats and snacks that were theirs to keep and wear proudly to the Coconut Crew kids camp program the following day.

It is this very dichotomy that is The Breakers’ greatest strength. While oozing class and old-world charm, the resort somehow manages to avoid crossing the line into snooty pretentiousness. No need for dinner jackets or ball gowns at restaurants here. I could enjoy fresh mahi mahi dripping in wildflower honey while the kids wolfed down the same catch lightly breaded into fish sticks. The following dinner my wife savored a tangy ceviche playfully served in a split coconut as the kids decorated the provided colouring book while simultaneously attacking whole wheat mac ‘n cheese. Outstanding culinary options abound over the resorts nine restaurants sprinkled throughout the beach-front property or within a quick complimentary shuttle ride into town.

What the restaurants lack for in naming originality (the Seafood Bar serves, um, seafood…take a guess at The Italian Restaurant’s menu, or hazard a try locating the Ocean Grill) they more than make up for where it counts—the quality of your meal. Every restaurant welcomed children with a dedicated kids menu. The Italian restaurant’s proximity to the resort’s youth camp makes it a particularly ideal location for a leisurely inter-generational dinner. As I relaxed in the company of my parents over a Mediterranean snapper, my children had disappeared into the adjoining glass play area. Many drinks later I ambled over to invite them for dessert only to find the girls enjoying a film in the on-site movie theatre. They were faced with an existential choice: finish screening The Smurfs or race back to the table for warm chocolate chip cookies with ice cream? These are the kinds of tough calls kids have to make on a Breakers vacation.

Meandering out to the resort’s ocean-front heart, the trend of something-for-everyone continued. We passed the spa where my wife and I were later to enjoy eighty precious minutes of tenderizing massage. Wading pool, lap pool, zero-entry beach pool, ‘quiet’ pools and a dizzying array of hot tubs.  With the service obsession expressed by exceptional staff, I wouldn’t be half surprised if a polite request to fill a pool with cranberry Jell-o wasn’t quietly fulfilled in some previously undiscovered corner of the property’s vast 140 acres. For a change of scenery, we hunted sea shells on the beach and I became reacquainted with my long-lapsed PADI scuba certification. Just a short swim from the beach, an old sunken pier has formed an artificial reef attracting a decent mix of marine life in shallow six-metre waters. This presents an ideal opportunity for snorkeling or an easy acclimation dive for an out-of-practice diver like me.

Surfing, bike rentals and even tortoise feedings flesh out the available activities. Palatial surroundings and meticulously groomed grounds are evident everywhere. The lawn abutting a public washroom is so gloriously well-maintained you’d be forgiven for thinking you were on the green of a premium golf course (note: The Breakers also boasts two premium golf courses). But it’s the little things that really set The Breakers apart. Outdoors areas are peppered with stations offering free water infused lemons, limes or oranges served in heavy plastic re-useable cups. It seems like a little thing, yet little things make all the difference: the heft keeps drinks from blowing around the pool deck or beach and adds a sense of permanence and luxury to the otherwise transient act of occupying a lounge chair for the day. It also helps ensure that not a speck of detritus mars the perfectly manicured grounds. If you had the gall and poor manners to let a gum wrapper slip from your pocket, invisible staff members would suddenly materialize from the ether to catch the offending piece of trash before it even hit the ground and just as quickly disappear back from whence they came.

Hand-painted Italian ceiling frescos and an award from Wine Spectator magazine for one of the best wine cellars in the world aren’t the usual accouterments one might expect at a property well suited for the junior set. I’m seated beside my father who is puffing away on a cigar comfortably ensconced in a lounger in the hotel’s sanctuary garden when my children bound up to me burbling about the sea-shell jewellery and macaroni pictures frames they crafted in the kids camp. It dawns on me that luxury doesn’t have to mean stuffy and that a well-chosen vacation destination really can please the six-to-sixty-six demographic.

It’s the final day of our inter-generational experiment and I’m walking past the doors out of the glass and steel dome of The Breakers signature breakfast spot, The Circle, when a hand taps my mother on the shoulder. With a huge smile, Mauricio, our waiter for the past three mornings, gently pushes a healthy package of Aztec roasted coffee into my mother’s hands. “You kept saying you loved the coffee senora,” he says in a light Chilean accent, “take a taste of your vacation back home with you.”

Thanks Mauricio. Don’t mind if I do. 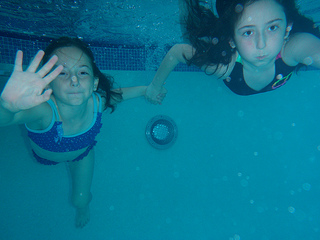 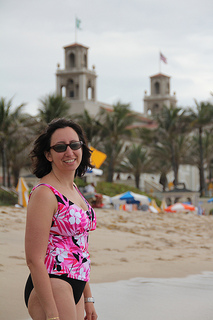