Travelling To The South Pacific With A Baby

Enjoy Paradise With The Entire Family 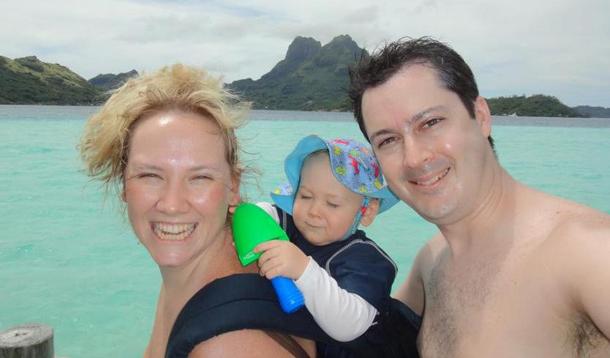 My husband and I are seasoned travellers, with frequent visits to the Caribbean. Upon the birth of our first child, we recognized that travelling would be more complicated and, likely, less frequent. With so many places to see and things to do in this world, accepting less travel was a tough pill to swallow. So, we wanted to experience an extraordinary trip, while our one-and-a-half-year-old was still free to travel and before we started to have more children.

The islands of the South Pacific sounded like a great idea, so step one was figuring out how to save up for a lavish trip. Step two was figuring out the travel logistics between three islands, two resorts, and seven planes, with a baby and luggage in tow.

Getting there is said to be half the fun, but packing with various luggage and security restrictions can be nerve racking. I do have to admit, travelling with a baby did have its advantages. We not only were the first to board the planes, but we were often expedited in lines—from flight check-in lines to customs and security.

We departed in an evening, from Toronto to Los Angeles, with a three-hour layover until our next flight. We did all we could to keep our little one up well past his bedtime, as we wanted him to sleep during the eight hour red eye, with Air Tahiti Nui. This flight would land us in Tahiti at sunrise, and by that time we would have stepped back five hours in time.

Tahiti is a well known destination that we all recognize, but our travel agent advised us to spend more time on the islands of Moorea and Bora Bora. Tahiti is more commercialized than its neighbouring islands, so within an hour of landing in Tahiti, we boarded a much smaller flight, for a seven minute puddle jump to the island of Moorea. Our son slept through most of the night flight, making entertaining him much simpler than we had expected.

The island of Moorea was my favourite. Its quaintness was clear upon our landing, when the baggage handlers came out with a flatbed and small farm tractor to pick up our luggage. It’s hard to get lost or confused with an airport the size of a ski chalet. The weather was very hot, sitting in the low 30s plus humidity, so being greeted at the Pearl Resort & Spa with cool towels and chilled tropical drinks was just what we needed.

We stayed in a beautiful garden suite, which housed a private backyard, including a three-tiered pool. Our son is a sucker for water and swimming, so early morning and late evening swims in the backyard quickly became part of his daily routine. The room was very welcoming, with high ceilings, mahogany woodwork, hardwood floors, and a lot of natural light. The bathroom had a separate toilet and a wide open shower with plenty of room.

They supplied us with a playpen, which helped separate our sleeping arrangements, and we received a cookie basket on our first full day, and a fruit basket on our last full day. Our Canadian winter is actually their low season, so the hotel was only about a third full. Their high season doesn’t start until May.

The grounds of the resort are a lush green, similar to Jamaica, and the infinity pool appeared to drop into the ocean housing the water bungalows. The zero entry into the pool made it easy for our son to explore his independence, by being able to get in and out on his own. Coral accented the turquoise ocean around the beach bungalows, and you didn’t have to look far to see a variety of colourful fish. There were many local birds that looked like miniature pterodactyl and sounded like something out of a prehistoric movie.

Food in general is very expensive in these islands, due to transportation costs. An average dinner will run you $50-$75 Canadian per person, and that’s excluding the wine. The Franc is the local currency used everywhere. You could sometimes use U.S. or Canadian dollars, but the exchange rate wasn’t usually worth it. One Canadian dollar equalled about 90 Francs. A grocery store was located just five minutes down the road from our hotel for reasonably priced necessities, such as water, suntan lotion, or a fresh baguette.

There were only a handful of families at the resort; however, the facility wasn’t set up with children’s activities or play centres that one might be accustomed to in the Caribbean. To come with children, you need to bring an imagination and a few toys.

After three full days in Moorea, it was time to take a short forty-five minute flight to Bora Bora. Anticipation was high for what’s been built up through movies, but the descent by plane was mesmerizing, with the varying shades of blue in the ocean. The Bora Bora airport is on an island all to itself, so regardless of where you are going in Bora Bora, your next mode of transportation after landing is a boat.

Bora Bora has a mainland, but there are a number of small islands that surround the mainland, which hold the majority of the resorts. Our resort, the Bora Bora Pearl Beach Resort and Spa, was on one of those smaller islands. We had a similar warm and refreshing greeting at the Bora Bora Pearl Beach Resort to help battle the humidity. The scenery was incredible and distracting as we attempted to complete our check in. I have to say, the lobby was very unique, being twenty-five feet high, open-air concept, and filled with handcrafted woodwork. 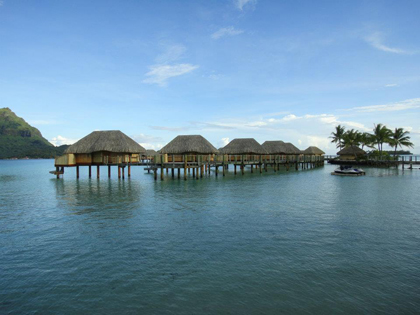 At the Bora Bora Pearl, we also had a garden bungalow with a private backyard and Jacuzzi pool. What surprised us most upon entry were the crabs running to hide as we entered our backyard. One was the size of a melon! It appeared that we had switched from unique birds at Moorea to crabs in Bora Bora.

The room itself was breathtaking. Hand carved woodwork around the bed, slippers and bathrobes laid out, and the shower was in a private section outdoors, with a sliding door adjacent to the bathroom. I can’t say I’ve ever used an outside shower that nice before. The vanity part of the bathroom was huge, also acting as a changeroom and held closets and cabinets. This was a perfect place for us to put the playpen that they lent us, as the doorways to the right and left of our bed had sliding doors to separate the rooms. Our last evening included complimentary chilled Tahiti wine with our turndown service, which was a nice touch!

When it comes to water, we are a family of pool people, but the gorgeous blue ocean drew us in daily. The tides were always low, the beach was lengthy, and you could walk out hundreds of feet into the ocean before the water would reach your neck. If the beauty of the water didn’t steal your heart, staring at Mount Otemanu on the mainland sure would.

It could be frustrating at times, being separate from the mainland, because if you wanted anything from a store, you had to get the hotels complimentary water taxi to the nearest dock in Bora Bora, then arrange for transportation towards your destination. Luckily, most places, like restaurants and shops, will pick you up and drop you off free of charge, but you do need to plan and make reservations.

The Bora Bora Pearl was also only about a third full, so some nights our only dinner options were with one restaurant or room service. The food overall was impressive, but again, two to three times the price of what you’d pay back home. We thoroughly enjoyed the fresh fruits, crepes, and local fish, like mahi mahi. We also noticed with both hotels that tipping was appreciated, but never requested or pushed upon us. We took a tour of the on-site Manea spa, and their offerings looked out of this world. I wish we had had more time to experience them.

One day we dedicated for excursions, and our first activity was a visit to “The Farm,” where they taught us how they grow and cultivate their famous black pearls. We found they’re as complex as diamonds in their thickness, size, shape, and perfection. Pricing on them also is as varying as diamonds, so shop around and look for certification when buying. Another excursion we had was on a glass-bottom boat. Our little one had some issues with the rocking of the boat, but the fish and coral were incredible to witness. Our guide even dove in, feeding the fish under the boat, allowing us to see them up close.

The French Polynesia islands are certainly more designed for couples, but that shouldn’t stop you if you have a family, as everyone is welcome. I’ve never seen a place so visually stunning in its natural beauty. It may not be an easy place to get to, or an inexpensive trip, but it’s a trip of a lifetime that will create memories like that of no other. 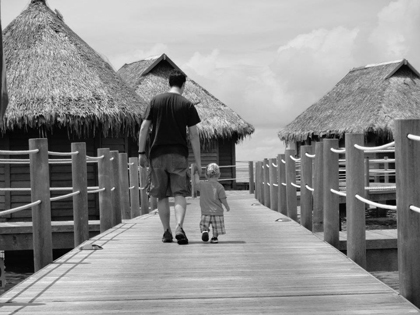 Wife and mother of 2 boys, owner and operator of Truly Medium and Truly Minister.