Ditch The Restaurants On Your Next Vacation

Packing Your Own Has More Benefits Than You Think 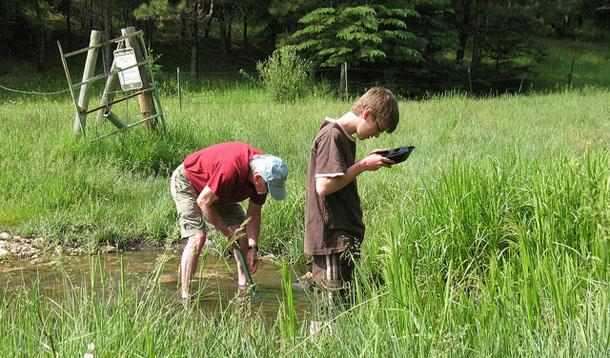 Each summer, our family has undertaken an epic road trip, which has usually meant travelling through as many as nine states, and covering over 8,000 miles. Two years ago, inspired by Jamie Oliver’s Food Revolution, we decided that we were adding a twist to our already adventurous vacations, by avoiding restaurants as much as possible. With a teenager who is sensitive to dairy, MSG, red food dye, corn, and soy, a picky adult, and another adult sensitive to nuts, it seemed to make a lot of sense.

In years past, eating out, primarily in mid-priced U.S. restaurants, was always a challenge. Many are void of fresh vegetables, and the portions are so large that we wasted a good deal of food—not to mention that the cost was becoming more than we wanted to spend. In 2010, we deemed our vacation “Food Revolution Road Trip,” and conducted an experiment—could we really survive two and a half weeks in the U.S.A. and avoid restaurants? As it turned out, we could!

First, there were the rules:

The first few days were easy—peanut butter and banana sandwiches in the car were a no-brainer, but what then? I’m the kind of person who gets sick of the same thing day after day, and by day three of peanut butter, I’d had enough. Thankfully, we found a grocery store soon after, but even then I wandered through the aisles wondering what on earth to buy.

Grocery stores in the U.S.A. vary from state to state—as widely as having a massive organic/natural foods section in Moab, Utah, to all the vegetables in pre-packed bags and nary a chickpea in sight, in Rapid City, South Dakota. As we found out fairly quickly, different food cultures (and food deserts) are very real. Introduce a family from Canada—who has no experience with any of the brands in that state—and food shopping becomes an exercise in experimentation. Still, embraced with a sense of adventure, rather than an inconvenience, the experience was a lot of fun.

I won’t lie, there were low points. In Nampa, Idaho, we were trying to find dinner, and all we could find were fast food restaurants. Tired and hungry, I almost caved, but John insisted that we had survived that long, we just couldn’t throw in the towel. In a moment of desperation, I made him stop at Wal Mart.

“Um, do you know where the nearest decent family restaurant is?” I accosted some poor girl in the middle of Wal Mart, quickly explaining that I was a Canadian tourist, so that must make it okay. I could tell from her expression that she thought I was slightly crazy. 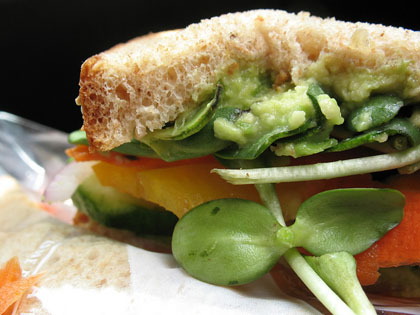 There was also the time when the hotel fridge froze absolutely everything we had bought, rendering most of it useless, and I had to throw it all away. On the other hand, we discovered some really delicious ways to make sandwiches on the go, and some amazing products that we cross the border and buy whenever we get the chance. The best payoff, however, was one we never expected.

Last summer, we sat in a grassy field, dotted with wildflowers, in South Dakota, by a little brook, munching on chickpea salads and nibbling cookies. The guys had been gold panning that morning, and our impromptu picnic meant that we didn’t have to leave and head back to civilization immediately. Instead, we could relax in the sun and enjoy our lunch, as well as the company of each other. Cows grazed nearby, and out of the corner of my eye, a fox was wandering just over the hill. Kevin chewed thoughtfully and let out a contented sigh, as he smiled.

“Now THIS is the way to have lunch.”

I can’t help but agree.

Go here to find out how to create a Food Revolution Road Trip for your family.