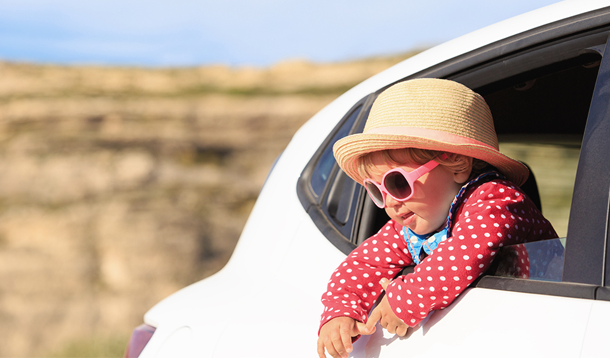 It’s warm weather and wedding season. That means road trips are on the near horizon. After a few flights with my daughter at a young age, I thought I would be more mentally prepared to tackle a 10 hour road trip this spring to my sister’s wedding in Milwaukee. Instead, I found myself having nightmares of my toddler screaming like a banshee while she tried to claw her way out of her car seat, Shopkins and Goldfish crackers flying at my head.

Thankfully, when I panic, I plan. So, to Pinterest I went, with my nerdy notebook and all. After many hours of deliberation, list-making, and shopping, I was ready to road trip like a boss.

If you find yourself dreading that upcoming weekend trip to the cottage, or week-long Disney vacation, here are some tips to make life a little easier when you hit the road.

Planning (and Not Planning) Pit Stops

Since our daughter is two, we were adamant that we wanted to maximize her nap time in the car. That meant that we needed to plan all our stops either before or after she napped. Seems easy, but as most know, predicting nap times is as much of a sure thing as walking into the bush and finding a unicorn.

Instead of meticulously planning out a detailed itinerary with exact stops at exact times, like the seasoned road trippers of our pre-child glory days, we took a new approach. It worked pretty well, I think. Using Google Maps, we mapped out our trip, and every two hours or so on our route, we picked a decent spot with easy access to food, gas, washrooms, and a play area (park, mall, McDonald’s Play Place, giant field, etc.) that would work for a potential stop.

Of course, even then you run into predictability issues. Sure enough, my daughter threw a few curveballs at us, but we made it both ways without a tantrum, so basically, we win everything.

If you’re a parent, you don’t need told twice that snacks can save the day. Road trips are no exception. This road trip snack box I found on Pinterest saved me on more than a few occasions. Not only does it save you from constantly rifling through bags, toddlers especially love the freedom and choice that comes with it.

I couldn’t find a tackle box at the dollar store, so I opted for a craft organizer (basically the same thing). Because our trip was in summer and I was worried about cheese or fruit going bad over the duration of the trip, I decided to stick with non-perishables in the snack box: Goldfish crackers, dried fruit, miniature cookies, pretzels, fruit snacks, and Puffs were all winners in my daughter’s books. Grapes, cheese strings (or cubes), strawberries, blueberries, and other healthier snacks would be fine for a cooler day, shorter trip, or accompanied with an ice pack in a cooler bag between use.

Making the Most of Your Electronics

Thanks to Netflix and their download feature, road tripping with kids is now 100 percent easier. Before leaving, I removed any extra pictures or videos from my iPad and loaded them onto my home computer to make space on the hard drive. I then downloaded as many shows and movies from Netflix as I had room for.

I also downloaded some new apps for kids (Feed Animals, Tiny Hands, and Car Puzzles were her favourites). I splurged and bought the in-app purchase to unlock all the digital puzzles in Feed Animals, and it was more than worth the three extra dollars.

Another vital purchase we made was an external, portable charger for our electronics. We opted for this Anker Powercore portable charger, which can charge an iPhone six times and an iPad about twice. The peace of mind that came with it was more than worth the small initial investment, and it’s definitely become a must-have for car trips since.

I’m not normally a crafty mom, but I’ve been known to reluctantly rise to the occasion when it matters. Since this was our first major trip with a toddler, I knew I had to bring my A-Game. Pinterest to the rescue! I ended up combining and simplifying a few ideas I found, but for the most part, these are the tried and true activities I used:

I found large coloured craft sticks at Absolute Dollar and the velcro dots in the craft section of Walmart. I put the finished product in a large Ziploc bag for easy access.

My daughter isn’t quite into dot painting yet, so instead we used coloured sale dot stickers from the Dollar Store, and she stuck them in the circles (sometimes). Other times she went Picasso on me, and that’s okay, because she wasn’t asking me for food or throwing the iPad.

I three-hole-punched the sheets and put them in a binder. I included a pencil case in the binder and put the dot stickers in there for safe keeping.

Colouring and Stickers on the Go

In the same binder as the printable dot pages above, I included some blank sheets of paper for colouring, and some in page protectors that she could decorate with stickers (the stickers become reusable on the page protector). I picked up some sticker packs of her favourite characters at our local Superstore and Dollar Store, and included those in the binder as well. Twistable crayons (also from the Dollar Store) were great for no-mess colouring, and were easy to include in the pencil case binder.

Since my daughter is only two, we had to make a few modifications to this activity, but it still was a favourite. Instead of regular Lego, we used Lego Duplo. I couldn’t find Spacemaker pencil cases, but I found a larger version of the same thing that we used instead. Duplo doesn’t have smaller bases that I could find, so we just included some of the blocks and people that come with the sets, and didn’t bother with gluing a base on to the top of the case.

This road trip bin worked great in the middle back seat between my daughter and I. Our favourites to include were: books, sunglasses, her favourite stuffies, some small toys, the activity bag and binder, and Lego travel case.

While we didn’t end up needing most of the items in my road trip survival bag, I felt better knowing they were at arm’s reach just in case. My bag included Kleenex, wipes, Wet Ones face wipes, paper towels, Lysol wipes, the external charger, empty plastic bags for garbage or spills, Bandaids, Polysporin, Advil, and sunscreen. I also created a make-shift car garbage out of an empty dishwasher pod container with a plastic grocery bag lining the inside.

This Skip Hop Travel Tray worked great for eating and activities. I personally love that it has a plastic insert that made it easy to wipe off after eating. She was able to prop the iPad up on it as well to watch shows and play games as well.

There’s no denying that any trip with kids has an uncomfortable amount of “I don’t know what my life will be for the next ____ hours, and yet I’m going to do it anyways,” but hopefully with a little planning and the odds in your favour, you can have a tantrum-free trip too.

Britanie is an adventurer at heart stuck in an introvert’s body. Her days are spent juggling being a stay-at-home mom and working as a freelance book editor, indexer, and writer. Britanie loves sports, especially hockey, and finds herself desperately tying to relate to her daughter’s princess obsession (God help her). Her parenting motto is “we can eat pizza for breakfast if we say thank you to the chef.”

After years of helping others publish their stories, she hopes to spend some time taking the trusty red pen to her own writing. She hopes that writing about her parenting fails will be much more conducive to life with a toddler than contemplating misplaced modifiers.