A Family Trip To Amsterdam 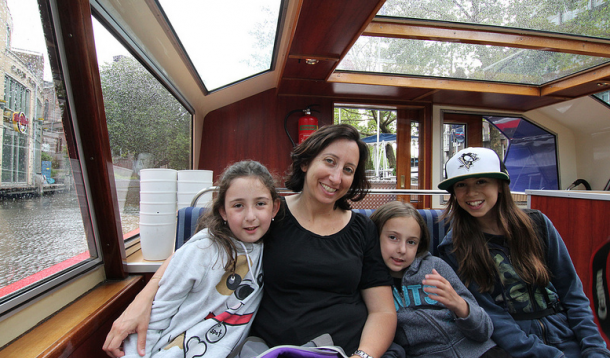 I’m standing on the cobblestones of a modestly-sized square. A gleaming white Apple store stands at one corner, while the rest of the intersecting streets are occupied by a hodgepodge of pancake houses, cafés, and souvenir hawkers. The sickly sweet smell of marijuana wafts distinctly through the afternoon air. A middle-aged busker—his unkempt grey hair peeking out in tangles from his foam trucker hat—has been spouting off-colour sexual humour for nearly fifteen minutes now, as he attempts to warm up the crowd before juggling a machete with a chainsaw.

Then a cry of pint-sized frustration erupts at my side: “Daddy, when is he going to do the trick already?”

That’s right. I came to Amsterdam with my seven-year-old daughter, her nine-year-old sister, my wife, and my mother-in-law. 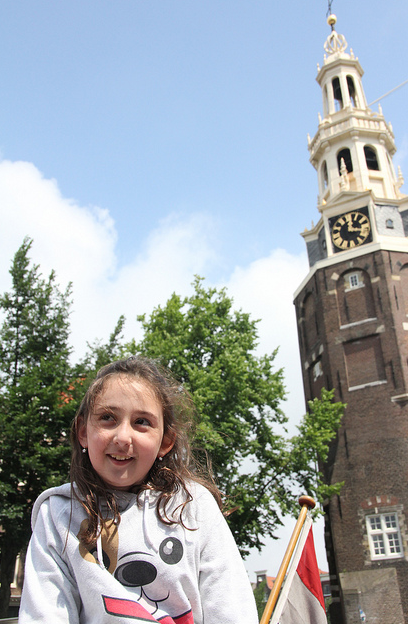 When words like “family vacation” get tossed around, Amsterdam—famous for red lights and redder eyes—isn’t typically the top of anyone’s list, but as I quickly learned, the city really does live up to the promise of something for everyone. That lesson was driven home early in the trip. Sitting in the KLM Crown Lounge at Toronto’s Pearson airport, the kids tapped madly on iTouches, taking advantage of free WiFi, while I knocked back complimentary Heinekens. Arriving in Amsterdam about six hours later, we departed the organized chaos of Schipol airport with the help of a cabbie who would not have looked out of place on Bay Street in his charcoal grey suit, starched white shirt, and purple tie. He whisked us into downtown Amsterdam in his immaculate Mercedes, dropping us off at the NH Amsterdam Centre Hotel.

The NH Hotel chain offers over half a dozen options for clean, comfortable, and affordable rooms across Amsterdam, though, I am bewildered by its choice to name one hotel the NH Amsterdam Centre, while another bears the name NH Amsterdam City Centre. My appreciation for an early check-in for one of our two rooms was tempered when our second room was still not ready for check-in at 8pm, after a full day of touring. Yet, the hotel did leave me smiling regularly with its cheekily irreverent attitude—bathroom cup coasters labelled: “glass relaxation area,” and lined napkins sporting the encouraging words: “Inspiration can hit you any time.” Pearls of wisdom from inanimate objects.

Once properly settled, it was time to hit the streets and take in the sights. Stepping out of the calm, muted serenity of our hotel lobby, I felt like Bambi on ice thrust into a swarm of caffeinated bees. Bicycles whizzed by everywhere. Sidewalks have a barely discernible red tinged hue on so-called “bike lanes,” though, the reality is that bikes rule Amsterdam’s arteries, transitioning seamlessly between pedestrian walkways and streets. Doing our best Frogger impression, we deked and dodged our way through traffic to the dock of the Blue Boat Company, where we boarded one of their iconic river boats for an orientation tour of the city’s criss-crossing canals. From there, we let the kids run wild through the many outstanding exhibits at the NEMO science centre.

Our next day was dedicated to two of the world’s great art galleries. The mere thought of dragging children under ten through an art gallery often strikes fear into the hearts of hapless parents, but both the Rijksmuseum and Van Gogh have excellent kid-friendly interactive tours that substantially enhance the experience. Oddly, these programs are not well advertised, so be sure to ask about them at the respective information desks. Gordon the Warden walks kids through the incredible Dutch masters at the Rijksmuseum, encouraging age-appropriate critical analysis of famous works, such as Rembrandt’s The Night Watch. At the Van Gogh, a children’s treasure hunt had my kids eagerly squeezing in front of patrons ogling Sunflowers, to discover secrets hidden in the brush strokes.

We then slipped into Coster Diamonds for a quick primer on the fine art of diamond cutting and polishing, before strolling through the tree-lined pathways of Amsterdam’s Vondelpark to our lunch stop at the Kinderkookkafe. This charming building, on the edge of the park, houses a simple restaurant where children do all the work. We chose our meals from a selection of postcards and then were handed a tray with the necessary ingredients. After rolling the dough, splashing on some tomato sauce, and dicing the toppings, the kids had each created their own tasty pizza.

On our final day in Amsterdam, we drank our fill of Jewish history and culture, starting with a somber visit to the cramped canal house where Anne Frank hid from the Nazis for over two years. I was again impressed with the efforts to make even such an emotional and difficult topic accessible to younger children. The house is devoid of the shocking gruesome photos that characterize many Holocaust museums, instead using Anne’s diary itself as the primary narrator. A child-friendly graphic novel version of the famous diary purchased in the museum shop was already dog-eared from repeated readings by the time we boarded our departing flight. If you plan on visiting, make sure you have your tickets or passes arranged ahead of time, as the line snakes around the block each and every day within minutes of the museum’s opening.

From the Anne Frank House, we took a scenic walk through the city’s heart at Dam Square before arriving at a quartet of adjoining museums comprised by the 17th century Portuguese Synagogue, the Jewish Historical Museum, a Children’s Museum, and the Hollandsche Schouwburg (a former theatre occupied by the Nazis that now serves as a monument and war memorial).

Formerly known by its more politically incorrect “Colonial Museum” name, the Tropenmuseum was founded to showcase Holland’s vast colonial possessions to the Dutch people. Now expanded to provide entertaining and interactive exhibits from cultures all around the world, my kids served tea in a recreation of an Egyptian café, toured an African village, and learned to yodel in the music exhibition’s soundproof booth.

If you plan on spending any time at a significant number of Amsterdam’s many attractions, you’re well advised to invest in either of the city’s two main passes: The Museumkart is primarily marketed to locals, but offers free admission for a full year to a very robust list of sites, and The iAmsterdam card can be purchased in 1, 2, or 3 day formats—although it does not cover some of the most popular attractions, it has the substantial added benefit of granting unlimited public transportation for its duration. Both cards allow you to waltz to the front of often lengthy lines, making them worth their cost in time saved alone. I recommend studying your proposed itinerary closely and picking the card that works best for your unique trip needs. 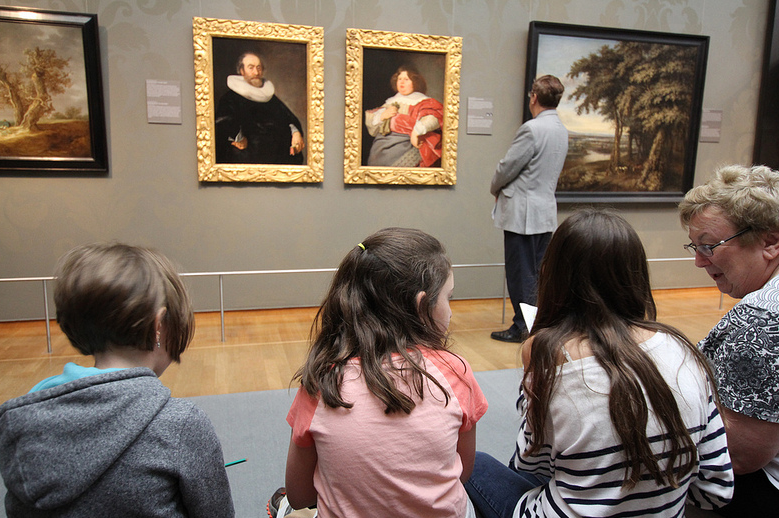 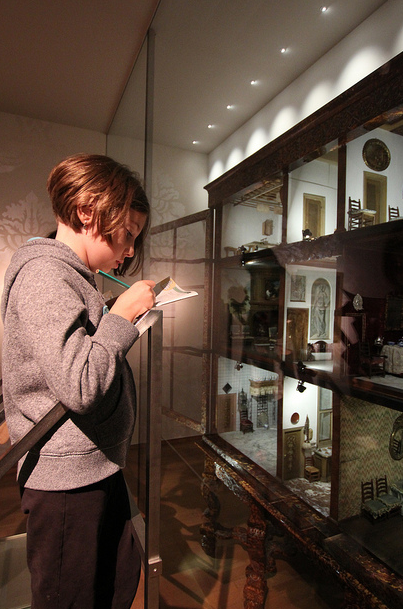 As for that colourful busker—we waited a while longer as he demonstrated the sharpness of his blades, by slicing seemingly haphazardly at a sheet of cardboard. After a few menacing cuts, he unfolded the eviscerated cardboard sheet to reveal a perfectly carved heart that he presented with a flourish to a lady in the crowd, before going on to effortlessly juggle his gas-guzzling chainsaw with a wicked-looking machete. After three whirlwind days in Amsterdam with a pair of eager children, it seems that the city itself mimics its colourful street performers—give her a chance and you may be genuinely surprised at what you get out of her.

Planning your own trip to Amsterdam? Check the new Visit Holland App in the iTunes app store.

Visit www.holland.com for more help planning your own trip.