Bridging The Digital Divide With Your Tech-Savvy Kid

Bond With And Protect Them At The Same Time 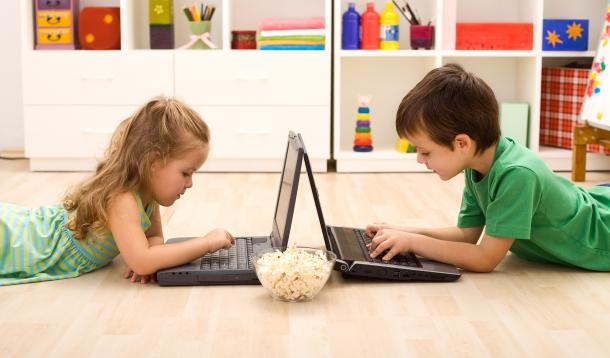 Yummy mummies and delicious dads, there's something many of us can agree upon: Our kids spend an awful lot of time with technology, be it playing video games, tapping on smartphones and tablets, or sitting in front of the computer.

As a result, many parents today feel there's a disconnect with their children, partly because mom and dad can't quite relate to this tech-savvy generation. After all, those who grew up comfortable with these gadgets and gizmos are often referred to as "digital natives," while their parents are considered "digital immigrants," as they're trying to learn and adapt to this strange new world.

And so there's often a "digital divide" amongst Canadian families, a rift that separates the tech-savvy from the tech-challenged.

Sound familiar? It should, as a recent survey commissioned by Orville Redenbacher found 40 per cent of Canadian parents say they're dissatisfied with the amount of quality time they spend with their children.

Hmm, perhaps it's no surprise this same survey also found 85 per cent of Canadian households have a gaming system, with children spending an average of 2.1 hours per day gaming solo or with friends or siblings.

But it's not just the lack of quality family time that's a concern shared amongst many Canadian parents. The dilemma is how we're supposed to educate, protect and guide our kids – when, perhaps for the first time in history – they are smarter than us when it comes to these new tech tools. So how are we supposed to steer our kids away from risks when they can click and tap circles around us?

The following are a few tips to better bond with your kids in their world as well as some suggestions to better protect them:

You might not want to look like a complete "N00b" in front of your kids, but just as you watch TV or read together, why not engage in interactive entertainment? Pick up the controller and make an effort to play games with your children. While military shooters might not be your bag, chances are there are other genres that don't require much manual dexterity, like a digital version of a familiar board game.

If TV-based video game consoles and their wireless controllers are too intimidating, try engaging with your kids on another platform, such as a computer or tablet.

The four major video game platforms – Xbox 360, PlayStation 3, Nintendo Wii and Windows PCs – can all be easily programmed not to play games with a specific age rating (e.g. "Teen" or "Mature"). Parents can find these password-protected settings in the Parental Controls area.

Don’t beat yourself up if this experiment in playing games with your kids doesn’t work. Remind them it’s just about connecting more and hanging out as a family. Perhaps at the very least you can make an effort to relax in the same room as your kids who are playing games – even though you might be flipping through a magazine on the couch. And they need to make an effort to bond with you, too – even if that means time away from the TV or PC.

Rather than placing an Internet-connected computer in a child's room, keep it in a central location in the home, such as a kitchen, family room or any other highly-trafficked area. Kids can feel independent while surfing online but not be "alone."

This is proudly sponsored by our friends at Orville Redenbacher.
www.orville.ca