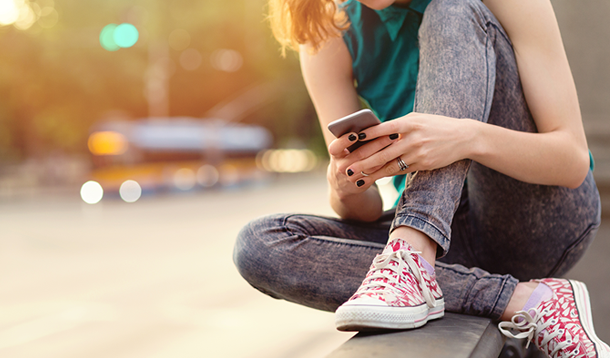 Sure, when Lin-Manuel Miranda included this sentiment for Aaron Burr in his musical Hamilton, he didn’t quite mean, “Texting will make you happier” – but it kind of does for a lot of people.

Apparently, the young ‘uns, as this elderly thirty-eight year old likes to call them, agree. According to one study, 35 per cent of 13 to 19 years old surveyed this year listed texting as their favourite form of communication, and that number is up from 2012.

Cue panicked parents everywhere. Except this one. I am absolutely fine with this number. In fact, I wish it had been more of an option for me when I was a teenager. You see, I hated in-person interaction as a teen. I have social anxiety, and interacting face-to-face has always been an incredible challenge for me, even with close friends. I clam up. I close in. I am not myself when I am talking to people at close range. And speaking on the phone is even worse.

But as a teenager, that was pretty much my only option. Sure, email existed towards the end of high school, but does anyone remember family dial-up? You were lucky if you got to check it once a day. Instead, I ended up hand-writing notes to my friends and awaiting their written response. Is that any worse than texting?

I’m more myself in writing. There is a reason I am a writer. I’m better able to communicate electronically, and I form better relationships through my computer than I do in person. Is that a bad thing? I don’t think so. For me, the world opened up when I began being able to be myself with people via the internet. I met my now-husband. I retained old friendships and began new ones much more easily. I am able to communicate openly and honestly with people in a way I never could before the internet, and most importantly, I get to be myself.

The internet is also an equalizer. I was not attractive as a teen. I’m not now either. I wasn’t a stylish dresser, or in a popular circle, or anything else that makes kids stand out in the hallway. But I was smart, and I was articulate. More than most, I say, at the risk of sounding vain. These characteristics would have helped me gain some ground in the teenage social circles had anyone been able to actually see it, but my crippling social anxiety silenced it and me.

Fast forward to the days of social media. Suddenly, I am able to express myself where others will actually see it. I’m considered popular in some circles now. People I never would have spoken to in high school out of fear of rejection, are now amongst my close friends. I’m intimidated by their poise and their beauty in person, but I can converse comfortably and form relationships with them online.

Why wouldn’t I want that for my children? After all, they wouldn’t even exist without the invention of social media. I was far too shy to talk to boys in person, but I met my now-husband when I was eighteen, in a chat room. We talked for six years before meeting in person, and were married eighteen months later. Without social media, I almost certainly would still be single. Today, many people meet online. Online dating apps are a booming business, and it’s not surprising to see why. Sometimes it is easier to get to know someone through text before you are comfortable enough to engage with them in person.

My husband and I still communicate via text much of the day, because it just simply is more comfortable for us. It isn’t that we feel weird in each others’ presence – we can sit around watching TV naked with no shame – but even after thirteen years of marriage, texting works.

Sometimes texting doesn’t close people off from the world – sometimes it opens that world up. For a lot of us, it increases our self-esteem, it doesn’t shut us in. I’d rather teach my kids how to communicate online effectively, safely, and respectfully than worry that they find texting more comfortable than speaking face-to-face.