Study Links Parental Phone Use with Behavioural Issues... in Their Kids

Are we becoming a nation of Zombie Like Phone users? 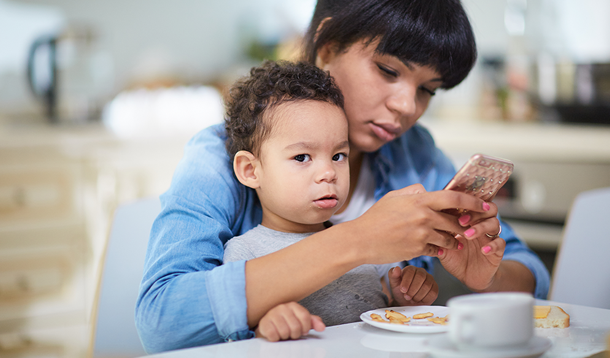 I was recently spending an evening scrolling on my phone, zombie-like, when my four-year-old daughter approached me and took my phone out of my hand. I looked up, and she passed me a book that had been lying next to me.

“Here mom, read your book. Your phone is all done,” she said.

I felt like I was in some strange twilight zone for a moment, but I can assure you of the reality of the encounter. My four-year-old was taking my phone away and giving me a book to read instead.

Over 27% of Canadians say that they use their phone more than two hours per day, a number that I believe is far higher than we actually take ownership for. I recently downloaded an app on my phone called Moment, which tracks each moment that you spend on your phone, and I was shocked to find that the number of hours I spend on my phone, and the number of times that I pick it up, is far above the Canadian average.

As someone who stays home with her kids, works from home, and takes control of most of the family administration, it’s natural that I would be using my phone often. I don’t use my laptop unless it’s for work, and I usually spend mornings on my phone answering emails, instead of sitting at my desk. Bu,t the habit of picking up my phone to “check-in” has grown more concerning over the last few years.

I was recently scrolling through the news on my phone (ha!) when I came across a recent study, which indicates that parents who spend too much time on their phones have children with more behavioural problems. Researchers at Illinois State University and the University of Michigan took a sample of nearly two-hundred parents and their children, and concluded that parents with heavy use of digital technology are more likely to find stress in their parent-child interactions, as well as more challenging behavioural issues with their child.

I  am one of the first people to defend parents’ phone usage. I don’t believe that millennial parents are the first parents to be distracted, and I think that’s an important point to make.

For years, parents have sat at the kitchen table and had a cup of coffee and read their newspaper for thirty minutes each morning. Today, you probably sit down and scroll through the news and weather on your phone in the morning,instead. Instead of reading paper magazines you read articles on your phone. Grandmas everywhere have replaced Sudoku puzzles with Candy Crush.

Our phones have replaced a lot in our lives that once distracted us, but I still can’t help but go back to the moment with my daughter, when she clearly highlighted that reading a book was more valuable than looking at my phone.

One of the issues with phones is that you can scroll forever, and you’ll never get to the end. With a newspaper you can at least finish the paper, and with a crossword puzzle you can finish the puzzle. But our phones suck us in, and before we know it we’ve spent our entire evening zoned out.

The other issue with our phones is that nobody really know what we’re doing on there. We could be watching Dr. Pimple Popper videos and claiming we’re reading a scientific journal. Or we could actually be reading a digital literary magazine but people are assuming we’re spending an hour watching cat videos. It’s impossible to stay accountable, and when kids are watching, it’s impossible for them to know what it is that is taking our attention away from them.

I know from personal experience that when I’m distracted my kids tend to act out. They get bored and frustrated, and they know that I will snap to attention if they disturb the peace.

I also know that I use my phone as an escape from reality. If my kids are draining my reserves, my phone helps me to cope with my exhaustion. This is something that was addressed in the study, and it’s true for many parents I speak with. Our phones are a tether to a world set apart, away from domestic chaos.

Where do we go from here? Highlighting the reality of phone addiction, and using our phones for coping is a great start. I’ve started to be more mindful of my phone usage as well, by using an app tracker like Moment, and also checking in with my partner and asking if he’s noticed if I’m “using” too much.

I’m also listening to my daughter, who made it clear that she doesn’t mind if I spend an evening with my nose in a book. I’ve started reading paper books more, leafing through magazines I pick up at the library, and working on activity books with my kids. Since I’ve started this I’ve noticed a difference, we all feel more engaged and connected, even if we’re doing our own thing independently.

So if you’re looking for an escape, try picking up a book, puzzle, or a newspaper, instead of your phone. Your kids will thank you for it, and maybe it will inspire them to do the same.