Are Your Kids Spending Too Much Time On Tech?

How It's Affecting Them 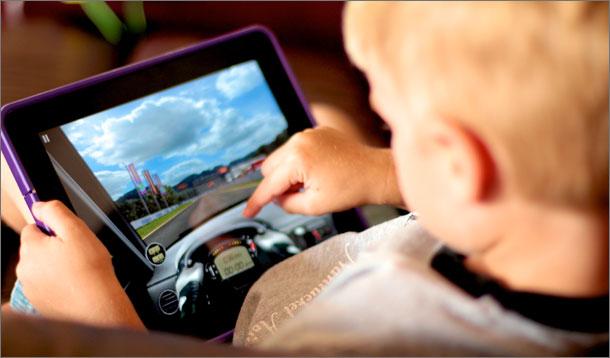 Like most parents these days, I worry that my three boys play too many video games and may be overexposed to the Wild West of the internet. Not only do I wish to protect them from harmful effects of the virtual world, I want to ensure they are living a balanced life… that the basketball games they play include a real ball, not just a virtual sphere in a Wii game.

Calculate how often your kids are on the computer. A recent survey by Norton on families’ internet use indicated that kids are online twice as much as parents think they are. If you’re not aware of their online time, then perhaps the computer needs to be moved to a more central location like the kitchen or hallway where you can keep closer tabs on their habits.

When one of your kids comes home from a friend’s house ask him (or her) what he did there. Did they play video games? If so, what ones? Did they go online? What websites did they visit? Be sure to ask as a concerned and interested parent. Don’t drill them with questions that may upset them. Let your kids talk openly without judging or reacting angrily. They’re more likely to share an upsetting online experience if they know they’ll be supported, and then will be less likely to find themselves in a similar situation later.

Consider your own online habits. Kids learn from modelling their parents’ behaviour. Are you half listening to your kids talk about their day as you browse your emails? Many parents work from home and using the laptop is an integral part of the day. Explain to your kids that you are online for your job and not playing games. Then turn off that computer or Blackberry when it’s family time. Kids won’t bother talking if they know Mom and Dad aren’t listening.

Review your kids’ school marks. Are they at the level you’d expect? While several factors can cause low marks, so can too much video game playing. A study by Robert Weis concluded that kids whose households owned a video game consoled fared worse academically than those living in homes without. But don’t toss out the games yet, instead, consider limiting the kids’ video game playing time. Make the rule simple (like no video games Monday to Thursday) and be consistent.

Danielle Bileski Leonard is a mother of three video-game crazed boys. She blogs about the effect of new media on families and chronicles her own battles against video game domination at home on Porridgereport.com. A short story writer and children's author, she recently published a middle grade adventure book, Danny in a Newfangled World, that is a cautionary tale about the internet.

When she's not writing or building blogs, shes making dinner, doing laundry, and sipping too much coffee or too much wine.