Online or offline, you should know what you're buying. 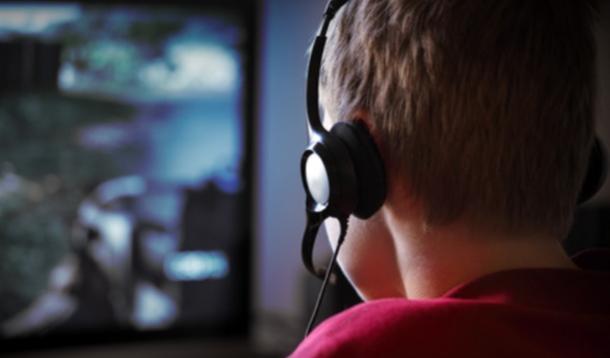 For those of you who don't know the Grand Theft Auto series, it's rated Mature. M on a video game is basically the equivalent of the end of the world on old maps - "Danger: Here there be sex, drugs, violence, and swear words."

Yes, Grand Theft Auto's franchise series has all of these things. In spades. It's a sandbox video game where you can yank someone out of their car and take it for your morning commute to go kneecap some people who owe your employer money, run over a few annoying civilians on the way, and shoot down a police helicopter with a rocket propelled grenade before you stop for "hot coffee" with your girlfriend. And no, I'm not talking about drinkable coffee.

I've been a long-time video game fanatic, all the way back to the days of DOS gaming. Granted, video games have come a long, long way. When I was 8 years-old, the worst we got up to with shooter games was trying to wipe the smirk off the face of that stupid dog on NES' Duck Hunt. But I've played Grand Theft Auto. Heck, I played the first incarnation of it - a top-down game released on PCs in 1997. When you ran over people then, it looked like this. 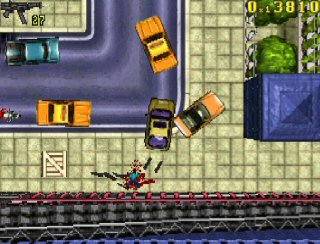 If you're shocked at the idea of letting a kid play this game, then I trust I've made my point. But the problem is a lot of parents do let their kids play this video game. A lot of parents are going to see it on their Christmas list. And I'm giving everyone the benefit of a doubt, they don't realize exactly what is capable in a sandbox game like this until they see it in action... or their 11 year old decides to go for a joyride on highway 400 to see what it feels like to drive a car.

1 - Don't take your kid's word that any game is okay to play.

Ratings are available on all commercially sold games, and they're pretty straightforward and easy to read. If you have any doubt, you can ask the clerk behind the counter at EB Games about how appropriate any given game is; they know, and trust me, they've got a thousand stories each about kids trying to buy or coerce their parents into getting a really nasty game.

Do a little research on the game itself. YouTube and gaming sites like IGN will be your best friend. They will all have rating information, and reviews, and you'll be able to see people playing the game.

If you've been asked for a gift card for gaming, read this.

Free games are never free. If there's no affiliated costs for a game, they're often supported by dodgy advertising that may have some unpleasant surprises. Pornographic ads are often the more pleasant of the worst case scenarios, which often involve malware, spyware, and ransomware.

A lot of the app-type games in particular have the slightly more subtle agenda of milking your wallet like you're a cash cow. These are usually called "Free to Play"  (F2P) games, but if you've ever played a couple like Candy Crush, you know that the real name of these games is "Pay to Win." They will yoke you into investing a significant amount of time and effort, and then demand payment to advance at all - you have to buy dollars, crystals, credits, power ups, or whatnot. Kids have no concept of how much money these types of games can yank out of them in such a short time. Just ask my son, who used up a $50 Google Play gift card in 48 hours to play Star Wars Commander because he didn't want to wait to upgrade his base.

More and more, kids are abandoning traditional console and PC gaming and going to online gaming sites like ROBLOX. ROBLOX in particular is HUGE with the grade 3 boys at my son's school right now. If your kid is into ROBLOX, watch out. There's plenty of lighthearted fun free games on ROBLOX, but it's the Wild Wild West of gaming. It's poorly-moderated, community-driven, and there's plenty of anonymity, and that seldom brings out the best in humanity. Viruses and malware might be the least of the things that you have to worry about - you'll find plenty of perverts, hackers, and rampant verbal abuse. On top of that, there's all the problems of video games, with none of the administration or legislation. We blocked the site.

The other thing you should know: your kids can talk to each other in games a lot more easily than you know. Even in games like Minecraft. More of these games have this ability than you may realize, so if your kid asks for a headset, you may want to find out who they're talking to. Plenty of regular console games like Call of Duty have online gaming components that let people communicate with each other. Trash talking, slurs, and abuse run rampant in these sorts of environments. Young kids belong nowhere near this. If you don't believe me, just watch (language, NSFW).