How to Handle Your Partner’s Annoying Behaviors

Clothes on the floor, open-mouthed chewing and more 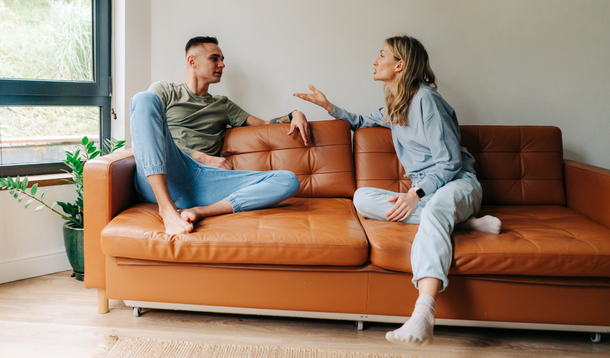 Clothes on the floor, hair in the drain, open-mouth chewing, dishes in the sink - these are just a few of the dozens of pet peeves I’ve heard as a therapist.

Let’s not forget my least favourite - toenail clippings on the coffee table. Blech.

Home is the most personal space we have, and learning to share that space with another person is a huge step that takes patience and compromise. I’ll admit that it sometimes takes a little more compromise from one partner than the other.

It’s okay to be frustrated, but it’s important to address these feelings healthily. Whether you’ve just moved in with your partner or you’ve been living together for years, they’re human and so are you. There’s bound to be some friction, but that doesn’t necessarily mean your relationship is failing or that you’ll never be happy with your person again.

The first thing you should do is take a step back and think about the nature of your partner’s actions. Is it within their control to change? Snoring is a perfect example of this since there isn’t really anything your partner can do to change it. In situations like that, it’s best to try and tackle the issue on your end, so it doesn’t breed resentment. In the case of snoring, earplugs or noise-cancelling headphones can help you avoid negative feelings toward your partner’s involuntary behaviours.

It’s also helpful to bring it up as sensitively as possible. “I love you, but your snoring is making it hard for me to sleep” is a lot more productive than snapping at them. Sleeping in different rooms might seem like a relationship failure, but I know many happy couples whose relationships improved after doing so.

The next thing to consider is if your partner knows that they’re pissing you off. Of all the reasons I’ve seen couples fight, the most common is that one partner is furious with the other for something they didn’t know they were doing wrong.

In one of my past relationships, my partner was incredibly sweet but oblivious to a fault. I did most of the cooking (I love to cook), but our apartment had the world’s most sensitive smoke detectors. They started blaring one day while I was slaving over dinner, and the noise made me angrier and angrier as it went on.

Then I looked to the living room and saw him scrolling through his phone, making no effort whatsoever to turn them off. I was furious, and all I could even think to shout was, “Really?!”

He got the message, but snapping at him didn’t make either of us feel better. The smoke detectors went off all the time, so he was used to them. I’m not sure if I’d have jumped up to deal with them either if I was trying to relax after work.

My irritation was so obvious to me that it felt ridiculous he couldn’t see it. Instead of giving him the benefit of the doubt, I thought he was just being inconsiderate and lazy. I mean, how could he not see it? He knew I’d been cooking for hours, that I’d been working before that, and that I - like everyone else - hate the screeching of smoke alarms.

He did care about me, but at that moment he didn’t have the mindset to notice my feelings. For many of us who spend our days interacting with others, home is a place where we’re used to turning off our social radar and focusing on ourselves. Living with a partner doesn’t just add another person to your home; it fundamentally changes what your home is.

In my experience, that’s the main reason for dysfunction in cohabiting couples. You and your partner act considerate, charming, and thoughtful during dates, but when you’re at home, your brain usually switches to self-care and relaxation.

For this reason, it’s best to take a few deep breaths before you respond in these situations. If you respond with anger or sass, it can seem just as unfair to them as their actions seem to you. Learning to live together means communicating delicately about small things and building habits that work for both of you.

Unfortunately, sometimes our partners continue their annoying actions after we’ve reminded them time and time again to cut it out. They may be late to every occasion, consistently talk over you, or never seem to help out around the house.

Each issue is different, and they can’t all be fixed the same way. First and foremost, ask yourself if your partner is listening to you when you communicate respectfully. If months or years pass without any real improvement, then it might be time to move on. It’s advice I hate to give, but some partners aren’t willing to make the effort and the relationships just won’t work.

Don’t rush a breakup just yet - there are plenty of ways to work on things first. Many people are terrified of counselling because they’re afraid the therapist will take one side or the other, but that isn’t our job. Things get heated when you and your partner get on each other’s nerves, and a counsellor is there to help both of you find an unbiased understanding.

One thing that gets most couples is housework, and it’s often because they have different ideas about what should get done and when. Studies show that couples who share chores equally are better off, but few of us manage that balance. As awkward as it may seem, making a chore list or schedule can help you get along with your partner.

This needs to happen with compromise.No one wants to live in a pigsty; if your partner is too neat or too sloppy for you, it’s likely they just think chores should be done on a different timeline. You may hate seeing dirty dishes, but your partner might be used to doing them a day or two later. We’ve all been raised differently, but dividing housework is one area where it’s easy to reach common ground by talking about chores and agreeing on how and when to do them.

Last but not least, you and your partner need to consider whether or not any mental health issues are affecting your ability to be happy together. When one partner is dealing with an undiagnosed or untreated mental illness, it can seem like they aren’t trying. In reality, their illness may make it difficult or impossible to meet your needs.

I worked with a couple where one partner struggled with obsessive-compulsive disorder and the other was dealing with clinical depression. She needed their home to be spotless, but he could hardly find the energy to do anything after he got off of work.

She, however, had been taking the wrong medication, and he hadn’t been diagnosed at all. Once they got the help they needed, their fights over annoying behaviours became much less frequent.

If there’s one thing you should take away from this, it’s patience. More often than not, the things that bother us at the moment seem trivial after a few hours. Your feelings about your partner’s behaviour matter, and you deserve to have those feelings heard - not fought over.

Aliyah Moore (she/her) is a certified sex therapist with a Ph.D. in Gender & Sexuality Studies and a resident sex expert at SexualAlpha. She aims to educate and empower minority voices to embrace their sexuality and identity. Her work & advice have also appeared on Bustle, Cosmopolitan, Popsugar, and MindBodyGreen, among others. You can learn more about her on her website: AliyahMoore.com