I want to know they will always have each other. 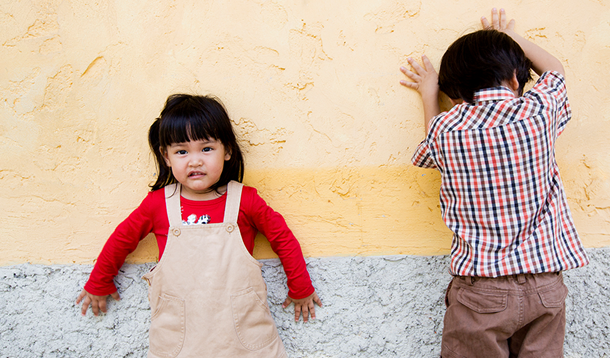 When I sit back and think about my children’s relationship with each other, I immediately hear The Facts of Life theme song in my head. You take the good, you take the bad, you take them both and there you have...siblings.

I have two wonderful children; a nine-year-old girl and a seven-year-old boy. They are great kids. They are full of personality and intelligence and love. They really love each other. But, more often than not, they can't stand each other.

I always said I wanted to have one child, and then give that child a sibling, and then I’d be done. That was the vision I had for my family. I grew up with a sibling. That is what I knew. That is what I was comfortable with considering for my own life, for whatever reason. It’s not like my brother and I were thick as thieves. We were best friends for the first six years of my life, and then barely tolerated each other for the next twenty. That’s the truth.

But, I wanted my kids to be one of two; and that’s what we have.

Little brother is twenty-six months younger and idolizes big sis. She can do no wrong. He wants to play with her and wants, so badly, for her to want to play with him. He will never say no if she calls him. She is the bees knees.

Big sister can’t stand little brother. She loves him but she finds him super obnoxious. She tolerates him, unless he’s hurt or unwell, at which point she will give him a blanket and water and a pat on the head and an ‘I’m worried about you.’ When he’s at full health though? Go the eff away!

When they play nicely, I sit back and inhale every second, like the first sip of wine post pregnancy. Best, feeling. Ever. I love hearing them make each other laugh, entertain each other, enjoy each other. I enjoy every millisecond because I know it will end like these encounters do every. Single. Time; in children screaming at eachother for a perceived slight and my husband and I having to separate them and scream ‘okay, everyone to their own rooms! Bedtime!’ Lights out often comes earlier in our house than we’d allow, if they didn’t fight.

My brother and I might not have been bffs for most of our young adult lives, but I’d say he’s one of my favourite people in the world now. Though I know he'd have a smug look reading that, I’m pretty sure he knows that to be true. If my parents had a second child just to give him a sibling, I’m glad it was me.

Thirteen year old me would call you a liar for saying I ever said that.

That’s the thing about siblings. Sometimes they’re bffs from birth, sometimes they hate each other for life. Two children being born to the same family guarantees nothing. My kids might annoy each other until the end of time.

The fact that the play turns into fights, if I put it into perspective, shouldn’t lessen the genuine fun that preceded it. I inhale the good and exhale the bad, because, the days of totally sharing lives in a household are few; they will never again have the opportunity explore a friendship with someone with whom they share DNA.

They might not ever be the best of friends. But, these are they years where they learn everything they need to know about one day deciding if that person is one of the most precious people in their lives.