Enjoying a new relationship when you have kids from a former one is challenging enough; moving in is a whole new ballgame. 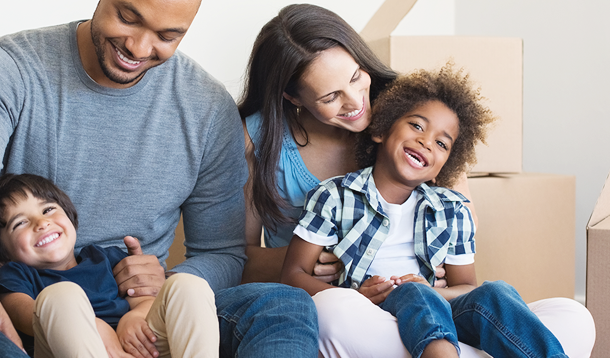 Ah, new relationships. Romance. Hanky panky. Date nights and cuddling on the couch and all those things we imagine in new relationships get shoved to the side when there’s a kid involved. Trust me, I know.

It felt like the early stages of my (now-not-so) new relationship were challenging enough, but then we decided to up the ante: We moved in together. It was the right decision for us and felt like a very natural progression in our relationship, but I’d be all-out Pinocchio-nose, pants-on-fire lying if I said it’s been easy.

File this under “Do as I say, not as I do” because we completely missed the mark on this one. Despite his involvement in many aspects of my son’s life, including handling many a bedtime routine over the past two years, my boyfriend and I had never really talked about the responsibility “split” between us when it came to my son.

Fortunately, we didn’t let it go beyond the point of no-return and we were able to discuss responsibilities and the division of kiddo-related labours fairly.

Some boundaries don’t make sense now that we’ve all settled into living under one roof as a family. For example, where my boyfriend wasn’t super involved in kid-related tasks before, he now carries half the weight in ensuring my son is dressed appropriately, showers regularly, brushes his teeth, etc.

And, since we now officially live together, the one or two nights a week we always enjoyed solo are gone. To support our alone time, my boyfriend has designated nights each week he does his own thing which frees me up to do my own thing!

Scheduling alone time doesn’t sound sexy, but sometimes it’s the only way to make the sexy-time happen. It also just so happens to be the only way to do most of the other things we want to do each week, like see our friends or hit the gym.

But it’s not just sexy-time and solo-hours we schedule: I also schedule time to spend with my son, just the two of us, each week.

Identify the “Threshold” and Assign Tasks

I cannot stand lint and debris on the floor. My boyfriend hates it when things are left on the counter. I believe the bathrooms need to be cleaned twice a week. He feels clutter needs to be eradicated. We don’t see eye to eye on these things.

Aside from actively trying not to drive the other person crazy, we’ve divvied up the household tasks to make sure neither of us is bogged down doing everything. Is it always equal? Hell no. But we each have certain tasks we own and recognize one another’s threshold for tolerating the things that make us loopy.

I confessed to my boyfriend a few weeks after we’d moved in together that I was fearful we’d become roommates to one another. He was less concerned, but understood my perspective, and we chatted it out.

Keeping the spark alive is always hard once that initial flame dulls a bit, and our relationship is no exception. From committing to maintaining the little things, like holding hands and kissing, to bigger things like nights out on the town or a weekend away, maintaining the romantic side of the relationship needs to be top of mind.

Oh! And don’t forget to spontaneously hop in the shower together from time to time.

RELATED: The Cold, Hard, Dick Pic Truth About Dating as a Single Mom