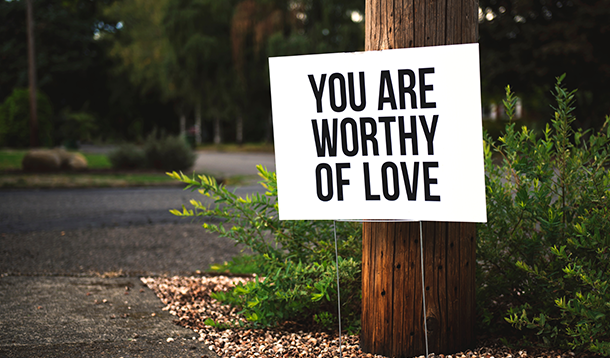 I used to think that self-worth was somehow tied into your relationship status. That being single spoke volumes about your character and deemed you unlovable and lonely. My, how far I’ve come.

This unhealthy mindset kept me in two very demeaning back-to-back relationships from the ages of 15-20 and 20-25. Not only was I concerned with keeping a man, they had to be (in my mind) smoking-hot alpha male status. I mean, how could I be proud of showing them off and claiming my title as their girl unless they were? I constantly battled my feelings of insecurity with the sense of satisfaction that other women found my man attractive.

That’s right, he’s mine. I locked that down. You jealous? Hi hater.

As a grown-ass adult, it makes me cringe to even write that, but I’m also not going to pretend it wasn’t important to me. I was young, and stupid, and superficial AF.

While I did love both of these men for different reasons, the good times rarely outweighed the bad. They both had similar destructive tendencies that I thought I could fix. Something my therapist told me was the result of guilt for not being able to fix my mom before her death. In retrospect, she may have been right, but at the time all I kept thinking was I couldn’t be alone. I couldn’t be first a single undesirable teenager, then a single undesirable mother. I needed to keep these men in my life regardless of what was happening because having them defined me. It meant I was worth something to someone.

There were clearly two turning points for me during these 10 years that led me from one relationship to the other, then from that one to where I had my epiphany, where my hatred for the person outweighed any fear I had of loneliness or judgement. My biggest regret is that in both cases, those decisions didn’t come easily even though the red flags had been screaming in my face the entire time.

I knew it was unhealthy and destructive. I knew it was detrimental to my well-being. I knew I deserved better. Yet it wasn’t enough to leave… until it was.

That’s when I began process of healing and experienced the prosperity that follows it.

It wasn’t something that happened instantly. It took years of self-reflection and soul searching to realize I was all I needed to be happy and fufilled. My children too, of course, but this was about me and something I kept completely separate from them. This was something I dealt with at the end of the day after they went to bed, when I didn’t have them to focus on.

How could I morally carry this burden into a new relationship? No one deserved that from me.

Night after night, I grew stronger and healthier and more in love with myself as person. I became my own best friend. I learned how to enjoy being alone and letting go of the shame I used to associate with being a single woman. I could have dove face-first into another relationship, but I made the choice to face my fear and insecurity head on. My self-worth was not tied to the men I so desperately held on to for many years.

The power this gifted me was unsurmounted and paramount to my well-being in the long run. It wasn’t always easy, though. The deep pangs of loneliness can eat you alive if you aren’t prepared for them. Pretending they aren’t hurting or won’t is doing yourself a disservice. Just know: they fade. They fade into nothing more than a brief thought.

Eventually, you’ll reach a point where you’re whole again. Where you yourself are enough. And let me tell you, girl, that’s when your life will begin. Rather than feeling you need someone to complete you, you’ll feel that no matter what happens or who comes in and out of your life, you’ve got your own back. You are all you need.

When I decided I wanted to start dating again, I was able to do so with a clear head and complete confidence. I knew what I brought to the table, I knew what I was worth, and I refused to settle for anything or anyone who didn’t compliment my life. Compliment - not complete. I was already complete.

This allowed me to be both realistic and open minded about who I chose to spend my life with. I was no longer stuck in this immature and self-deprecating head space, clinging to a certain type of man that I thought I needed. It allowed me to meet people from all walks of life and to determine not only if they would be a welcomed addition to my life but if I would be the same to them. I wanted my next partner to know that they had someone who didn’t rely solely on them to be happy and that I too could compliment their life rather than complete or complicate it.

And you know what happened? Love found me. Healthy, mature, real love. The kind of love you hear about but are unsure if it really exists. It’s a place where respect, attraction, and chemistry dance together, holding hands around a fire.

The self respect that I had worked so hard to build was only amplified by the deep respect that I received. The quirks, -isms, and flaws that I had accepted about myself were now genuinely appreciated, and my self confidence was admired, not perceived as arrogant or pretentious. I had finally learned the difference between needing someone and wanting them.

It changed the game.

He is not my other half, because I am not incomplete; he is my partner. He is the person that I choose to share my life with and he chooses to spend his with me. He doesn’t need me - he wants me, and I him. This dynamic has allowed us both to be the best version of ourselves without remorse. To talk through issues that most couples shy away from because we know why we’re both here. There is no fear of stepping on each others toes. There is only mutual respect, understanding, and love. The bond this has created is something I have yet to feel in my 28 years on this planet and I want to scream it from the rooftop.

“How are you going to love someone else if you don’t love yourself first?” is not just some absurd notion that you hear in a rom-com movie. It’s real talk and an issue that so many people – not just women - deal with, especially after the end of a significant relationship.

Even if you were the one who ended it, insecurities creep in, self-doubt rears its ugly head. Taking the time to accept and process those feelings is not only beneficial to you but to the next person you let into your life. We so often carry baggage with us from one relationship to the next and while not everything can be simply let go of, wouldn’t it be beautiful to lighten the load?

I am far from perfect. I still have fleeting moments of insecurity and self-doubt, as does he. The difference is now, they aren’t magnified by fear of being alone and undesirable. We’re both at a place in our lives where we can accept them, process them, and let them go without fear of scrutiny because we have already established a mutual respect for each other and the people we have become. The level of commitment is deep and fueled purely by our genuine understanding and love for each other. We both know who we are, and where we stand.

This realization is life changing and not something I ever would have been able to accomplish had I not taken the time to heal myself as an individual. I now know I am deserving of the love this man has for me and I know the love I can give to him is pure. Authentic, unadulterated love for no other reason than because of who he is at his core.

He’s a good one, and for that I am grateful.

Previously published at By Bri.

RELATED: Dating As A Single Mom

Brittany is a mother, millennial, minimalist, coffee addict, and professional rambler. She resides in beautiful Northern Ontario where the air hurts her face but she's okay with that. Want to be her friend? Introduce her to your dog.