I Refuse to Co-sleep (...With My Husband)

Not sharing a bed is actually better for our sex life. 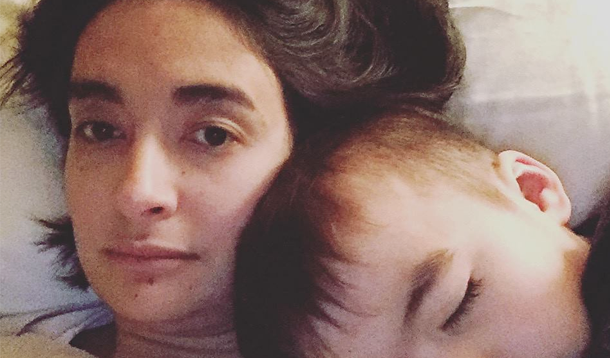 The first time my husband (then my boyfriend) and I shared a bed on a regular basis was when I went to Spain to visit him while he was on exchange. He told me to pack a pillow. I didn’t realize it was because he didn’t have one, and that we’d be sharing his twin mattress, my pillow and his sleeping bag for six weeks. The mattress was best described as lumpy, and it was on the floor. Every morning when his alarm would go off and he’d leave for class, I’d secretly rejoice at having the bed to myself. I’d zip up the sleeping bag, crawl inside and finally be warm enough to sleep peacefully for a couple of hours.

When we moved in together in 2008, we soon discovered our many sleep incompatibilities. I am afflicted, as it turns out, with “burrito-itis.” The main symptom is that I wrap myself in the blanket like a burrito, thereby leaving my husband to freeze. My husband snores. Loudly. He didn’t believe me until I played my iPhone recording for him. I also like to get up in the middle of the night to snack, and my preference is to eat said snack in bed. (And my favourite middle-of-the night is crackers, in a nice, loud, crinkly wrapper.) Even before kids, we were not cuddly sleepers. We love snuggles and cuddles and spooning, but when it’s time to actually sleep, we assume our official sleeping positions, back to back, each happily confined to our own side of the bed. (And sometimes, in the winter, me with my own blanket to avoid the burrito conflict.)

When our son was born in 2012, he was supposed to sleep in his bassinet next to me, but he ended up sleeping in our bed. My husband’s job at the time required him to be on-call most nights, and his sleep had subsequently become extremely light, since he had trained himself to wake up and be semi-alert to answer his vibrating cell phone. (At which point I’d usually get up for my snack, of course.)

So to avoid both waking up the baby with his midnight phone calls and being woken up by the baby’s slightest movements, Papa often slept on the couch. For a short spell, Cub slept alone in his crib in his bedroom, but the disturbance of me getting up to see him in the middle of the night and then getting back into bed was impacting my husband’s sleep. Now, I know some of you might be thinking, “Too bad, so sad, buddy! Why don’t YOU get up and take care of the baby!” And admittedly, I’ve entertained those thoughts as well. But the thing is, Cub never gave us a sleepless night, just one or two night wakings, so I never experienced the extreme sleep deprivation that I know a new baby can bring upon some parents. Also: boobies. At 3 AM the only option I want to entertain for putting my kid back to sleep is the easiest one. Furthermore, staying home with Cub, I could and did nap frequently with him during the day, so I was okay with getting up with him at night. Plus, my husband would at times go 24-hours without sleeping due to his job, so I knew who needed the sleep the most.

Eventually, Cub would go to sleep in the futon in his room, and my husband and I would go to sleep in our own bed. When he would wake at night, I’d go to him and spend the rest of the night co-sleeping, thus avoiding waking up Papa by getting back into bed, and also meaning I wouldn’t be disturbed by Papa leaving for work in the morning.

I found a photo of Cub’s bedroom, around age 1.5… as you can see, the crib was occupied by the cat: 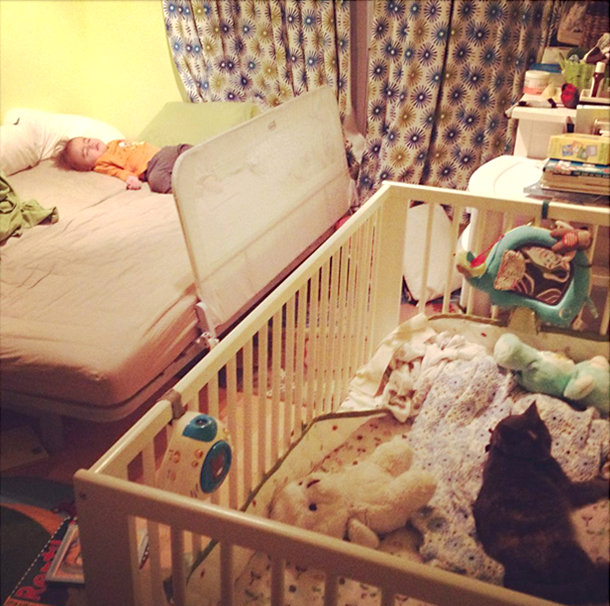 Fast forward four years, and since we have a daughter who’s just turned one, we obviously were able to have sex at least once despite our slightly less traditional sleeping arrangements. We now live in a different city, in a townhouse rather than a tiny apartment, and my husband’s job no longer requires him to answer the phone at 3 AM.

Alas, we share a bed even less frequently than we did before!

When I was pregnant with our daughter, my frequent preg-somnia and tossing and turning (and increased nighttime snacking) drove my husband nuts. He often slept in the guestroom in the basement during the week. It was actually perfect for me: when I would wake up in the middle of the night and be unable to get back to sleep, I could flip on the light without fear of disturbing him, I could listen to a podcast without earphones and I could get up to pee as many times as necessary (many) without trying to gingerly slip out of bed every time. With my husband getting a good sleep in the basement, I knew that when he got home from work he wouldn’t be completely exhausted, so he’d have the energy and patience to take over toddler-wrangling.

Once the baby came, she was in our bed immediately. When there’s a new baby, you do WHATEVER YOU NEED TO DO so that everyone gets as much sleep as possible. Let me tell you that I sleep so well with my baby next to me. This is not the case for every mother, but I honestly sleep soundly with my baby in the crook of my arm and wake up just enough to get her latched on when she starts to stir. During the first few weeks, I was also changing her diaper at least once in the middle of the night, and with Papa sleeping in the basement, I didn’t worry about waking him. (Although he had the monitor with him so he could get up with our son if need be.) Again, some of you might be saying, “Why doesn’t HE change the diaper in the middle of the night?!” Well, because I’d rather have him get a good night’s sleep during the week when he has to be up before 6 AM and on his way to work. If he’s a zombie at work and makes mistakes, he could lose his job, and if he lost his job … well, I’d have a lot more to worry about than a diaper change at 3 AM. If he’s getting enough sleep during the week, he’s not burnt out at the end of the day when I’m desperate for him to be home and parenting with me, and on the weekend, the trade-off is a sleep-in for me and a nap or two.

I sort of figured that by the time she was a year old, I’d have gotten Little Miss used to sleeping alone in her crib so my husband and I could get back to normal sleeping arrangements. On the weekend or when we have guests in the basement, we sleep with Little Miss between us, and it’s hit or miss in terms of sleep quality. On most nights, we dreamfeed … I hear her stirring next to me, roll over and nurse her and we both stay pretty much asleep. If Papa’s in bed with us, he’s not disturbed and all is well in the morning. But of course, as luck would have it, most nights when the three of us are together, Little Miss is fussy and I get stressed trying to keep her quiet so her Papa can get a good night’s sleep. Because from my point of view, there is absolutely no point in both parents getting a crappy night’s sleep. If Little Miss is up and fussing, two people don’t calm her better than one, and the lady with the boobs calms her faster!

Furthermore, we have totally different bedtime schedules right now. He tries to get to bed before 10 PM, and at 10 PM I’m typically still working. My work hours are whenever both children are asleep, and the best way to keep the littlest asleep is to be physically close to her. Thus, my office:

The importance of sleep is one thing my husband and I can agree on (and we have polar opposite views on a surprising array of subjects). Both of us tired is like lighting a match while you’re pumping gas. I sleep well with baby by my side, and I’m much better rested than if I were getting up to go to her in the middle of the night. My husband sleeps better with as little disturbance as possible. When my Mom was visiting us, thus occupying the guest bed, my husband took Cub’s bed and my bed looked like this: 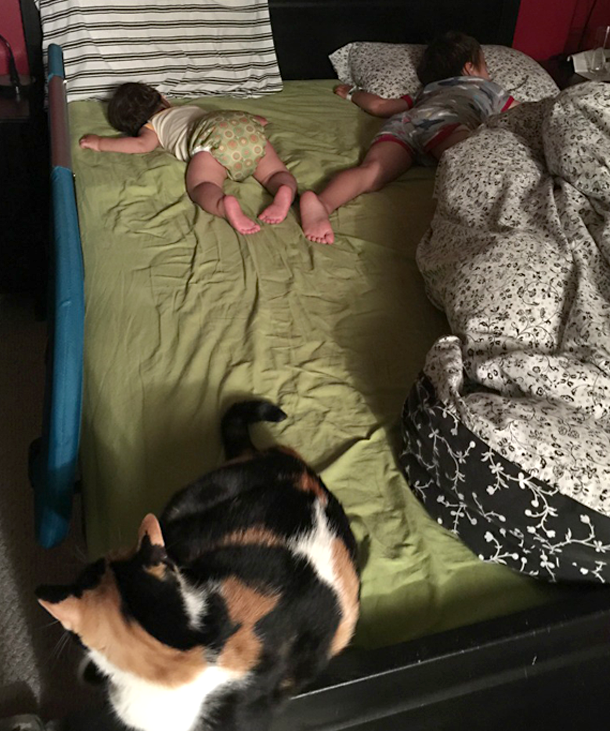 On the bright side, with my Mom visiting, guess who can sleep in or have a nap?! (Me! Me! Me!)

When we’re both sleeping well, even if it’s not in the same bed, the good sparks are flying and there are plenty of other surfaces on which to light the fire … so not sharing a bed is actually better for our sex life. Little Miss is likely our last baby, and she won’t be in our bed forever. We have decades of child-free bedtimes ahead of us, and I bet we’ll still enjoy sleeping apart sometimes! (And once the baby is night-weaned, I am camping out in the basement all by myself for a few weekend-nights!)

Lindsay Gallimore
I am a 33-year old former high school teacher with a BA in French & Spanish, a BEd and a Diploma in Translation. I channel my love of language and communication into my blog, where I write about the humour that keeps stay-at-home parents sane and the practical side of making choices for our families that are both environmentally and financially sustainable. Originally from Surrey, BC, I lived in Montreal, QC for 7 years before moving to Calgary in 2015 where I live with my husband, school-aged son and toddler daughter. We are expecting twins in 2018!