Fighting Fair: We All Have Style, Even in Conflict 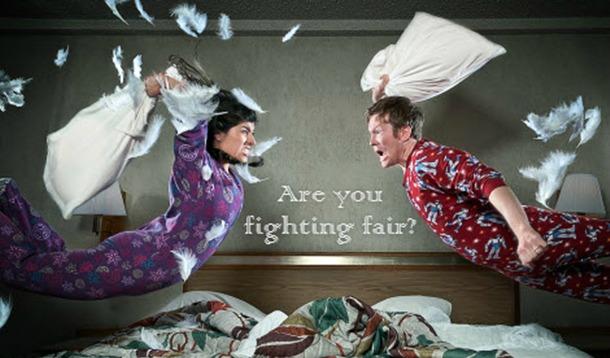 ALL parts of communication are skills that can be learned; fighting is part of that. Effective communication during a fight is tough though.

Most people are familiar with what an unfair fight looks like: The Blame Game, Silent Treatment, Inappropriate Timing, Threats, Witholding of Affection or Sex. I’m sure that you can name some more.

You hear it all of the time: "You need to attack the problem, not the person." How is withholding sex attacking the problem? It’s not. It is however a reaction to being hurt, the need to hurt back.

Are there unspoken rules of fairness when you fight? Sure!

Sounds easy, right? However, what is easier is to fall into old habits and fight the way you always have. Fighting fair is a skill; one that you have to practice to get better at.

Is there a difference between a fight and an argument? Yes, fighting tends to have a winner and a loser, arguing is more like a debate. At the end of the day it’s still a conflict. Conflict doesn’t need to be negative; it can often bring about positive change.

It’s important to know your fighting style and the other person’s if possible. We all have style—even in conflict. Some of us have better style than others as we well know. If you are fighting with someone, what is a good result for you? Keeping the relationship? Finding a solution? Avoiding the fight altogether? OR Do you need to win at all costs?

Now think about the other person (I KNOW this is hard), what do you think is a good result for them?

If you are both the ‘win at all costs’ type nothing will get resolved and the fight will continue.

If you are a ‘win at all costs’ type and they are an ‘avoid fights altogether’ type the fight will end but nothing will get resolved.

It’s important that you realize that people perceive conflict differently. Does your partner need time to process or do they like to stay and have it out? You can’t force someone into your fighting style and hope to have positive results.

Don’t forget that other emotions can sometimes look like anger: frustration, guilt, fear. or hurt. Make sure that you are actually in a fight before you engage the other person. Maybe they just need to blow off steam about the person that cut them off on the way home. Your partner may not have even noticed yet that you haven’t taken out the garbage.

As long as couples don’t talk about money, parenting, free-time, or communication, they will be fine (yes I’m kidding). Although they are common topics of fights.

Often you’ll see the same conflict start fights over and over again. Without resolution and a plan to deal with it next time, it’s destined to repeat itself. Yes another unfair fighting habit, bringing up the past.

Whatever you want to call it, conflict, fighting, disagreeing or arguing, it’s a natural human emotion and you can’t avoid it. How you deal with it differentiates you though!

I am the Owner and Principal Mediator of Families First Mediation,

I went through a terrible divorce, I worked hard to develop a career in the financial world, I have been the primary caregiver to both my kids and my parents and I’m now happily in a blended family situation. I have a lot of life experience – some great, some just great learning experiences.

Conflict happens...that is no surprise. How you choose to deal with it will make a difference as to how successful you are getting through it.

Through Families First Mediation Julie provides you with the opportunity to fairly, creatively and personally develop solutions that best meet YOUR requirements.

Julie will help you learn how to fight...FAIR.