The Day My Son Learned a Cold Hard Lesson About Money

I won’t always be there to walk him through every day-to-day transaction the way I was that day in the store. 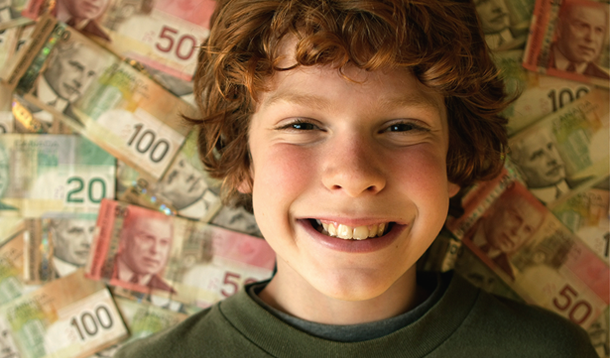 My son may only be nine, but I know that when I blink, he'll be a teenager, and when I blink again, he'll be a man. The prospect of his looming adulthood scares me half to death. After all, this is a boy who can't cut his own food or tie his shoelaces. Many kids with Autism and ADHD struggle with executive function (a fancy term for the ‘how’ of performing tasks). When my son was diagnosed at age three, it seemed like we had all the time in the world to teach him. He was late to walk, talk, toilet... Eventually he managed to do up a button and ride a bike. Every new skill he acquires takes him at least twice as long to master as other kids. But I stopped sweating the milestones. The tortoise got there in the end, didn't they?

Lately, though, I’m aware that time is running out, and there is still so much he needs to learn. Many a night I lose sleep worrying about his future. Will he ever hold down a job? Will he ever have a girlfriend (or boyfriend)? Will he ever move out? How will he handle banking or financial affairs? He's intelligent, so it follows that one day he will want his freedom and autonomy as much as the next person. And he deserves it. The question is: how do I get him there?

Although he knows money doesn’t grow on trees—wouldn’t that be nice?—his grasp of finances is still fuzzy to say the least. In his mind all you need to do is hit up an ATM, and it will magically dispense the number of bills you ask it to. This is the beautifully privileged world he inhabits—one in which his every need is instantly, unquestioningly met. His childhood is markedly different than mine: while my hard-working single mom did her best, I was aware that I couldn’t have every little thing my heart desired the moment my heart desired it.

In fairness, the concept of money is hard for concrete thinkers like my son to fathom. Fortunately some of the best lessons in life just happen to us. At school one day my son’s shirt caught on his desk. Intrigued by the slight tear in the fabric, he used his pencil to poke and stretch the hole until it grew larger and larger. Then, escaping his teacher’s notice, he repeated the exercise on his jogging pants. He came home that day, his clothes beyond repair. Having studied my tone of voice and facial expression, he could tell his mom was upset without quite understanding why. “Clothes cost money,” I explained, “money your father and I work hard every day to earn.”

To drive the point home, I decide he will replace the damaged clothing with money saved from his birthday and allowance. Together we march into the store, locate pants and tops in his size, examine the price tags. I register his disbelief when he does the math. How can these clothes—which mysteriously keep appearing in his closet—be so expensive?

The reality is, I won’t always be there to walk him through every day-to-day transaction the way I was that day in the store. And because of his challenges with executive functioning, he can’t seem to plan or retain the sequence. I know that even as he’s taking it all in, we will have to break down the steps and practice them again and again—whether it’s brushing his teeth or buying a loaf of bread. Break it down, practice, praise, repeat… Getting any skillset to stick is tedious work. At home I can pin visual and story boards around the house for easy reference, but what about when he’s out in the community? How will he buy tickets for a movie? How will he take the subway? I want him to confidently and safely explore his surroundings like anyone else. So it’s a comfort to know that CIBC MagnusCards, with its discreet phone app, will provide the freedom and prompting he needs in various scenarios, like when he hits up an ATM…

MagnusCards is a free app, built to help teach life skills with simple story telling, in decks that pertain to  various activities. The financial lessons come from CIBC Magnus Card Deck and include banking and money management like cashing and depositing cheques, paying bills, and withdrawing money from accounts. Because the steps are laid out in a structured, easy to navigate manner, anyone who benefits from step-by-step guidance will find them beneficial. (MagnusCards are especially useful for those with autism, ADHD, Asperger syndrome, acquired brain injury, Down syndrome, intellectual disabilities, dementia and other cognitive special needs.)

“Don’t forget to add tax,” I remind him as we line up to pay for the pants and top. Unlike his mom, he has a good head for numbers and is able to add it up in a split second. Already I know our shopping trip has taught him more about money than any math book ever could. Not least of which because buying clothes is in no way as exciting as buying toys.

He hasn’t ripped his clothes since.

This is proudly sponsored by our friends at CIBC.