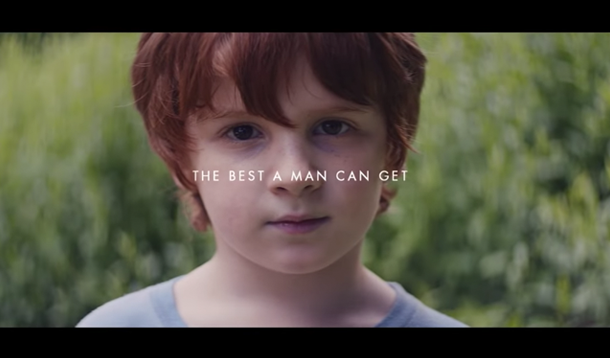 I didn’t expect an ad for razors to make me cry, but here we are. The new “Best a Man Can Get” campaign put out by Gillette features a video encouraging men to speak out against toxic masculinity, be supportive of other men, call out men who are contributing to the culture of toxic masculinity, and to stand up to bullies. I watched it prepared to see a well-done ad. I finished it in tears. It gave me hope for a future in which all genders feel safe, physically and emotionally. It made me think that maybe gears are finally shifting. It heartened me so much to see men portrayed as a driving force to combat misogyny instead of women and non-binary people taking the lead trying to change the hearts and minds of men. I really felt good about the world after watching it.

Then I signed on to Twitter this morning and realized that toxic masculinity is alive and well. If there was ever any doubt of the need for this ad, read any post on social media about it. Comment after comment of men feeling “attacked” as though the ad were anti-men. Before I finished my morning coffee, I had been called fat and ugly and told to get on a treadmill once in a while; that I was teaching my sons to be rapists; that maybe men should make a razor ad for women calling them gold diggers, emotionally manipulative, and naggers; and any number of other horrible sexist things, simply for stating I thought the ad sent a wonderful message.

I’m pretty outspoken online. I will speak out against injustice without hesitation any time I see it, be it sexism, racism, homophobia, or any other type of bigotry, and I will do so with confidence. But these comments shook me. I held my ground, but I felt vulnerable to these attacks by men who clearly identified with the bullies and toxic men in the ad more so than the “good” men.

More than that, what I saw was a lot of men going off on aggressive, sexist tirades, with women standing up to them, but very few other men stepping in. I know a lot of men liked the ad, I’ve seen men share it. I’ve had men like it when I posted it. But it seems not enough of them are doing as the ad encouraged and standing up to their fellow men, but rather leaving women to feel vulnerable and unsafe defending the ad for them.

The biggest argument I’ve seen is, “You can’t tell me how to be a man, you’re a woman, stop womansplaining to me.” This is toxic masculinity at its finest and exactly what the ad intended to combat. Womansplaining is not a thing. Mansplaining relies entirely on the fact that men hold institutional power that women do not. You can’t reverse it. And women and non-binary people have a stake in how men behave because we are frequently victims of that behaviour. We have a lot invested in ending toxic masculinity because it is interwoven into our experiences as women and non-binary people. When “men behave badly”, we get hurt in a very literal sense.

We are also raising sons. While the comments from aggressive men do bother me a great deal, I never expected the ad to impact very many grown men who were not already inclined to combat toxic masculinity. I care more about my young boys seeing this message. It reinforces all of the ways my husband and I are raising them. We are raising future men, and we are trying to do so without the harmful effects of toxic masculinity – both for their own sakes and for the women and non-binary people with whom they will be interacting.

There is also a huge misconception amongst men about what exactly toxic masculinity is. Toxic masculinity is not men doing “manly” things. No one is telling men how to be men, in fact, it’s the exact opposite. Toxic masculinity is the notion that men should behave a certain way because they are men, such as never showing emotion, being violent, being aggressive, etc. It’s tied directly to misogyny, which harms all genders. When we remove toxic masculinity, we don’t tell men how to act – we allow men to be themselves, and that benefits everyone. It makes women and non-binary people safer, it makes men safer and more emotionally healthy, and it promotes nothing but good. You can be very “manly” while fighting toxic masculinity. Don’t believe me? Talk to The Rock. Talk to Terry Crews. Talk to thousands of men who have decided that being a man doesn’t mean conforming to unnecessary harmful expectations or hurting others.

Men who did understand the point of the ad and took it to heart, now is the time to follow its lead. Hold a mirror up to your fellow men who are using this ad as an excuse to go off on sexist, often aggressive, tirades. Hold them accountable. Call them out. We need your voices. Other men need your voices.

Men who did not get the point of the ad, watch it again and try to see that it is simply asking you to be kind to others and to yourself. It’s asking you to stand up for the vulnerable, and allow yourselves to break the male stereotypes. It is not telling you how to be a man or saying men are bad. Watch it again.

And to parents, especially of boys. Take note of the way many men are reacting to this ad. Ask yourselves if this is the culture we want to cultivate and nourish, or if we want a world that reflects the one in the Gillette ad where people look out for each other. We are raising the next generation of men. We have a chance to phase out toxic masculinity. We owe it to all of our children to do so.

Category:
In The News
Tags:
Gillette
The Best a Man Can Get
youtube
toxic masculinity