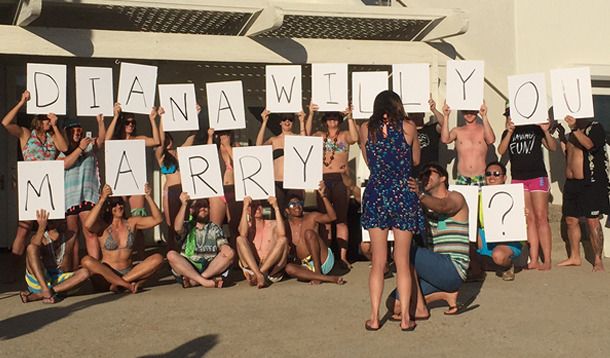 Well, it finally happened. Twitter found someone to universally hate. Was it a politician? Nope, those are pretty controversial. A Nazi? No, sadly even those have people on both sides on Twitter. Indeed, the new villain is a man who proposed during the New York City Marathon.

What? That doesn’t seem right. Isn’t that a good thing? Don’t we love proposals? Well, generally, sure – but wait for it. He stopped her, mid-race, to do it. Literally plucked her out of mile sixteen and proposed. Dude. Yeah, you see it now, don’t you? I bet you’re making that face.

I’m sure Dennis expected to be viewed as a modern-day Valentino for that gesture. “So romantic,” the ladies will swoon. “Why can’t we have a guy like him?” But that is not what happened. Universally – universally on Twitter – he was panned.

“Way to make it all about yourself” was the phrase most often echoed. Seriously. Do you know how much training, how many months of work, goes into preparing for a marathon like this? Does he get these things are timed? He could have at least waited until she finished the race. But even then, could he maybe let her have this moment to herself to bask in her own accomplishment?

“AND he didn't even take her sweatshirt that she clearly didn't want or need! I'd have given the ring back at the finish line.” Said Twitter user Sarah Spelt.

Actress Justine Bateman made some predictions for the future of their marriage. “Cut to: 1 year later, she is receiving a prestigious professional award. As she approaches the stage, he intercepts her with a dozen roses, walks her up there, and distractingly stands behind her as she reads her acceptance speech.” And another, “Cut to: 2 years later. She’s giving birth and he insists on reading her the first draft of his wonky spy novel out loud.”

Another Twitter user offered some helpful advice for anyone considering doing the same. “If he really loved her, he would've waited until after the race, given her a massage, taken her to a nice dinner, left her alone all night so she could have a nice long rest, woke her up the next morning with homemade waffles and strawberries, then asked her to marry him. Geez.”

Okay, maybe we are being too hard on him. She did say yes, after all. And she did get a medal. But are we though? Are we? I mean, this kind of thing happens a lot – men making women’s moments about themselves. That’s not a secret. There were as many men cringing over this as there were women, because we all know this is not uncommon.

It can be hard for some men to let women have the spotlight – whether it’s in the boardroom or a marathon. Maybe this wasn’t typical for this particular guy. We don’t know him, we’re looking at a snapshot – a cringe-worthy, what were you thinking, snapshot. He probably genuinely believed this was the most romantic gesture in the world, and legitimately didn’t think about how it would impact her hard work and her own personal achievement. But that’s sort of the point, isn’t it?

I’m torn on public proposals in general. I mean, I guess technically my husband proposed to me in public. He had intended to do it in Central Park, a place that holds sentimental significance to us, but The Gates Exhibit was on and the whole thing looked like a giant car wash. It was also filled with people going, “This looks like a giant car wash.”

So he waited a day and proposed on Valentine’s Day at an intimate little restaurant that we later came to suspect was run by the Mafia. My proposal was witnessed by a very young, very sweet, very excited waiter (and possible future Godfather), but no one else. I think I would have been okay with it having happened in front of Central Park goers too, because I know my husband would not have made it a spectacle. I mean, I can’t handle people singing Happy Birthday to me, calling attention to me in a public proposal would mortify me.

There’s also the added pressure. “Hey, will you marry me? Say yes, or else you will shatter my heart in front of all these people. Do you want to do that? Do you want to be that guy, Karen?”

But there are some people who love it. My son’s teacher was proposed to by flash mob at the mall. She loved it. She loved it so much that years later, she showed her class the YouTube video of it. I did watch it, and it was cute. I mean, I’d have killed him, but it was cute for her.

I guess that’s what public proposals come down to. You have to really know your intended life-partner. And really, you should anyway if you are asking them to spend their lives with you.

But still, there are ground rules. Don’t pressure the person. Don’t make it all about you. And the biggest one, don’t steal someone else’s moment. That means never propose at someone’s wedding, or engagement party, or baby shower. And don’t grab your girlfriend out of mile sixteen. Or if you absolutely must, at least hold her sweater for her.