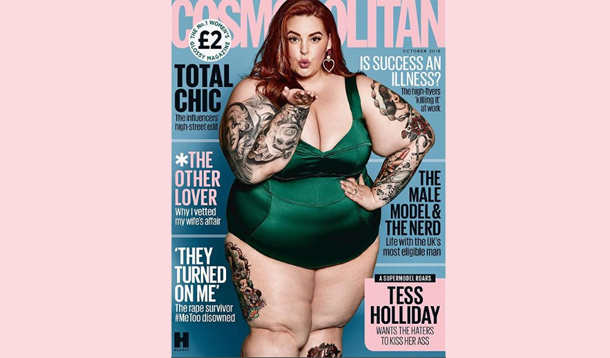 Plus-size model Tess Holliday was on a Cosmo cover recently, and everyone was super positive about the whole thing, treating her just the same as any other woman on the cover of a magazine. End of story, thanks for stopping by.

Of course that isn’t how it went! Have you read a comments section recently? Proving once again that fat women can’t just exist without criticism of their bodies, the concern-trolls came out in droves. At the helm was professional troll, Piers Morgan. "As Britain battles an ever-worsening obesity crisis, this is the new cover of Cosmo.

Apparently we’re supposed to view it as a ‘huge step forward for body positivity.’ What a load of old baloney. This cover is just as dangerous & misguided as celebrating size zero models," spewed Piers on Instagram. I know, why do we care what Piers Morgan thinks? The man is the worst in every way imaginable. We don’t. His opinion is akin to the buzzing of a fly around your ear – annoying but insignificant.

The problem is that you could remove his name from that quote and it could be attributed to any number of people reacting to Tess’s most recent cover, or any time a fat woman appears unapologetically anywhere.

Most people realize it isn’t cool to simply state that they don’t like fat women, so they get creative. They make it about the woman’s health. They state it like a simple math equation. She’s fat, so she’s unhealthy, and putting her on the cover means we are promoting being unhealthy. That’s some impressive mental Olympics right there.

First of all, being fat does not necessarily mean she is unhealthy. As Cosmo’s Editor in Chief, Farrah Storr explains, "When I put people on my cover, I'm not here to do a blood analysis. I'm not here to pass judgement. We have a crisis with mental health, and with people feeling bad about body image. So this is one cover that has a larger lady on the cover in a culture which venerates thinness.”

Indeed, you cannot tell if someone is healthy by looking at them, regardless of their body size. I once lost thirty pounds due to illness, and everyone told me how awesome I looked. I wanted to respond, “Thanks, I’m the sickest I’ve ever been in my life!” But let’s acknowledge for a moment that obesity can lead to health problems sometimes, and work on that premise - who cares?

Writer Katie Cloyd said it best when she said that, “We actually don’t have to be healthy to deserve respect as human beings.” We can be celebrated without a medical check. If a thin model is on the cover, do we check their medical records to make sure they don’t have any chronic conditions before showcasing them? No we don’t. Why? Because it isn’t about health and everyone knows it. Claiming to be concerned for health is simply a guise for body shaming.

When called on this, many negative commenters point out that Tess has a controversial history regarding ethics so she deserves to be shamed. It’s fair to protest promoting her based on her character or her actions. But it isn’t okay to use her body as a means to do so. When her body is shamed, so are the bodies of the countless women who look like her. Women like me. And I don’t appreciate it.

Plus, featuring fat women on a cover doesn’t make anyone decide to become obese. This “promoting obesity” business is nonsense. When we see people with disabilities featured, does it make people want to become disabled? Of course not. Celebrating diverse bodies doesn’t work the way that promoting an idealized, unattainable beauty standard does. Showcasing only one body type and hailing it as the epitome of beauty does that. Having only thin, blemish-free women does.

If we reach the point that we feature only fat women, and run article after article on how to achieve that fat look, and airbrush women so that they are fatter than they really are, and hold that up as the bench mark for beauty, then you can talk to me about promoting obesity. Putting a fat person on a cover does nothing more than show women that we can celebrate all bodies, and give much needed representation to women who need it.

In addition to all that, if people genuinely care about reducing obesity, they should be all for these covers. Body positivity is correlated with weight loss and adopting healthy lifestyles, while body shaming does the opposite. Promoting healthy body image is the exact way to go if reducing obesity and health problems is the goal.

But that isn’t the goal. The goal is to shame fat women in a socially acceptable way. And it needs to stop.. To the people who call out these awful comments, thank you. Keep doing that. It makes a difference to hear these voices in a sea of negativity. To the people who care more about someone’s body than the person inside it, take a long hard look at yourselves. And then shut the hell up.