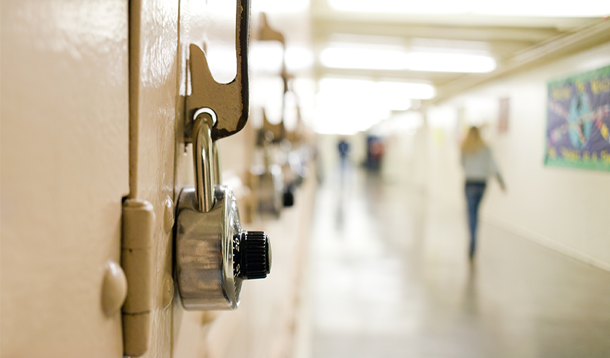 With the recent wave of schools adorning bathroom stalls and other areas around the school with positive, empowering quotes, it’s not surprising that Gregory-Lincoln Middle School in Houston decided to put a message in quote form above their lockers.

Did they go with a message about body positivity? Nope. One about trying your best and liking yourself as you are? Not even close. No, they decided the best advice to give the pubescent attendees of their school was, “The more you act like a lady, the more he’ll act like a gentleman.”

Let’s unpack this for a second. Taken at face value, misogyny aside, the message is bullshit. We have seen time and time again that women are mistreated no matter how they look, dress, or act. Even without the terrible victim-blaming, it’s bad and inaccurate advice. So there’s that.

But we can’t ignore the misogyny. What exactly does “act like a lady” mean? Should these twelve-year-olds meet at recess in their Easter bonnets and petticoats for afternoon tea and crust-less cucumber sandwiches? Does it mean cross your ankles, not your legs? Curtsey to each other upon greeting? Somehow, I don’t think that’s what they were going for. The definition of “acting like a lady” they were trying to get across was likely more along the lines of, “Cover your dirty, dirty body, you slut, and stop tempting those poor, innocent boys who can’t help themselves.” What an awesome message. I’m thinking of making that as a cross-stitch.

We wonder how rape culture exists. Wait, no we don’t. It exists through things like schools enforcing gender-biased dress codes meant to body-shame females and excuse poor male behaviour. It exists when girls are told by their own educators that it is their responsibility to keep men’s behaviour in check - that their victimization is their own fault. That their bodily autonomy is not a given right, but rather earned by their subservience.

This quote on the wall is disgusting. Graffiti would have been better. And the school should have known it.

But wait, there’s more. Not only did the school not think through the words – they didn’t even check the backstory of the quote itself or who said it. The quote is from Sydney Biddle Barrows, a Madame of an escort agency, and this was advice to her employees.

Now, I have nothing against sex-workers. I believe women should be able to do whatever they want with their bodies, including sex work. Consenting adults means consenting adults, full stop. I think this is still misogynistic advice when given to any woman, including sex workers who should be treated well and respected regardless of how they are dressed and what they do for a living.

But again, somehow I don’t think the school meant to promote advice given to escorts on their locker walls. If their (misguided) goal was to urge children not to sexualize their bodies, then they probably picked the wrong person to quote.

The whole thing is just a giant mess, and I hope that the backlash they are receiving will prompt the school to change the quote. Might I suggest, “Your body, your rules.”

Update: The school has since removed the quote due to backlash. Beautiful, appropriate, correct-as-$*%* backlash.