Right Now There is an EpiPen Shortage in Canada 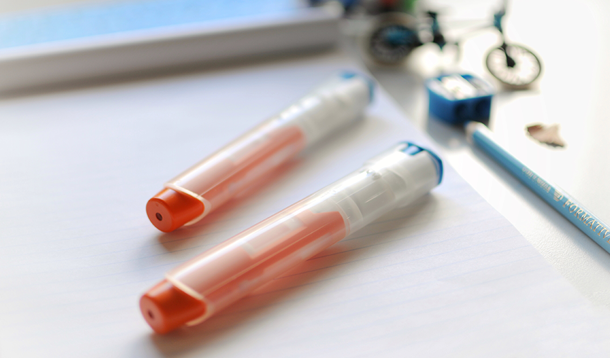 A nationwide EpiPen shortage is cause for alarm for anyone with a severe allergy, especially as students prepare to return to school.

For many, an EpiPen is a life-saving device, one that is absolutely necessary should they come in contact with an allergen, whether it's a bee sting or peanuts. Most adults and children with a severe allergy carry an EpiPen with them at all times, and many will have multiple in different locations.

Pfizer Canada manufactures EpiPen, an auto-injector that delivers 0.3 mg of epinephrine for an adult dosage and or 0.15 mg of epinephrine in the EpiPen Jr. The jr version, which also has a shorter needle, is meant for children between thirty-three and sixty-six pounds.

According to a press release by Pfizer Canada, both EpiPen and EpiPen Jr have been in limited supply throughout 2018, however, for the month of August, the adult dosage of EpiPen has become unavailable. EpiPen Jr continues to have limited availability, but is becoming increasingly more difficult to locate.

My husband has a severe allergy to wasps, hornets, yellow jackets, and carpenter bees. He requires an EpiPen as a lifesaving measure should he get stung. We’re currently entering wasp season, and my husband’s EpiPen expired last month. He’s an active man who enjoys riding his bike through trails, but we’ve become concerned about his safety now that we cannot access a new EpiPen.

Health Canada suggests that you keep your expired EpiPen and use it if you come in contact with an allergen, and call 911 immediately. Regardless of whether you have an EpiPen or not, contacting 911 is always the next step after administering your EpiPen.

Barrie mom Lesa Mena has faced challenges with the EpiPen shortage this summer. Mena’s 14-year-old son Jorge has a severe allergy to shellfish and crustaceans, and carries an EpiPen in case of contact with his allergen. Earlier this summer Jorge flew to Quebec to participate in a three-week Cadet camp and unknowingly brought with him two expired EpiPens.

“We received a call from the medical department of his camp telling us that his EpiPens were expired and he needed to have two new ones,” said Mena.

What she didn’t realize was that EpiPens were nearly impossible to locate, due to their shortage this summer. Mena called every pharmacy that she could in her area, but none had adult EpiPens. She called Quebec pharmacies and was told the same.

“The medical department of my son’s camp phoned me back to tell me they are not willing to wait any longer, and should I not have two EpiPens to them by the weekend, they would send my son home,” said Mena.

Shortly after the ultimatum, Mena was able to locate two adult EpiPens, but express shipping to Quebec would cost $600. She managed to find someone who was able to hand deliver the EpiPens on time, but the entire almost week-long ordeal was extremely stressful for Mena and her son.

It’s unclear whether or not school boards will be able to decline student if they do not have a non-expired EpiPen with them. The Upper Grand District School Board, which is the school board in my area, has confirmed that students will be able to attend school even if they cannot locate an EpiPen.

According to Global News, some daycares and schools may deny students entry without a current-dated EpiPen.

As for my family, we will be more vigilant and careful over the coming months with my husband’s time outdoors, likely avoiding trails and eating food outside. We’ll be sure to locate a new EpiPen as soon as they become available, but we don’t know when that will be.

Food Allergy Canada has provided an helpful FAQ and resources for families concerned about the EpiPen shortage.