Sometimes, the frothing mob is right 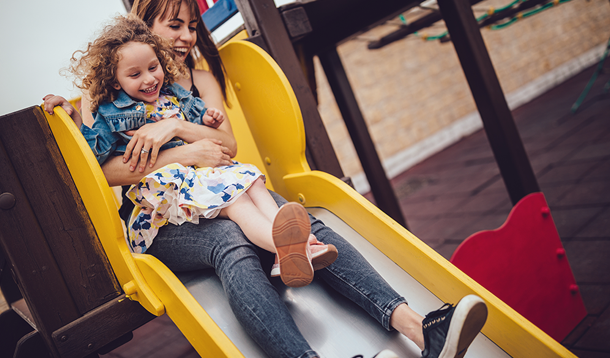 When Chrissy Teigen posted an adorable photo of herself going down a small playground slide with toddler Luna on her lap, the so-called sanctimommies came out in droves. Didn’t Chrissy know Luna could have broken her leg? Immediately following the warnings came the people to chastise the 'buzzkills.'

But who was right in the situation? As it turns out, broken legs on slides from lap rides are more common than you think. Recently, a horrific photo caught the moment a toddler’s leg snapped going down a slide with her mother. In addition to being a visceral warning, it clearly showed how this accident happens, proving that it’s not as far-fetched as we previously believed.

I guess the chastisers owe the Debbie Downers an apology. But it does raise an interesting point: If we see something potentially dangerous online, should we point it out or simply appreciate the cute photo or entertaining post?

I have had many an eye rolled at me for pointing out car seat misuse online. There are few things that drive me more crazy than when a publication chooses a photo of a child improperly buckled into a car seat – whether the wrong type of seat, the straps too loose or in the wrong position, wearing a winter coat, or any number of dangerous infractions – as the thumbnail for their article. I point it out.

Car seat safety is black and white. There is a right way and a wrong way to do it, with very little grey area. It’s based in physics and science, and not at all about opinion or difference in parenting styles, so I feel justified in calling something flat out wrong when it is.

But what about when it isn’t so black and white? We have all gone down slides with our kids on our laps, and most of the time, it’s fine. Does freaking out over every potential hazard help parents make safe choices or make us paranoid?

I appreciate knowing the hazards. I was thankful to have read about the dangers of bumpers and bedding when my babies were small so that I could make sure they had a safe sleep space. I take precautions with chords on window blinds, and with drawstrings in clothes at the playground because I read of horror stories. And now, I’m careful about slides with pint-sized co-riders.

But I can understand how all of these cautionary tales could overwhelm parents. I can see why, instead of evaluating each risk, many simply throw their hands up in an exasperated, “Is anything safe anymore?” way. I get the temptation to cling to the false equivalency that, “We did all this stuff and we survived,” forgetting that not everyone did.

There’s also the motivation of the commenter to consider. I feel badly for the people who are giving a heads up out of genuine concern who get dog-piled on for being alarmist. They are legitimately trying to help keep children safe, and I feel that the ire they receive for doing so is unjustified.

Then there are the people who truly are sanctimonious. For them, the drive behind the comment is recognition for how much smarter they are than these 'idiots' who don’t know basic safety. These people negate the efforts of the honest do-gooders.

Compounding all this is the sheer volume of warnings parents receive. It seems that social media is just filled with horror stories, leaving parents to weigh the anxiety over the seriousness of the incident with the likelihood of it happening. Was it a freak accident? Could it be reasonably prevented? Is it okay to continue to use that product or do that activity?

Last week, there was a warning from a mom about Soothie pacifiers, after her son suffered a suction injury from sleeping on one. There’s no denying that the incident was terrible – but is it cause for tossing the pacifier? Is that a common injury?

Then there are the warnings that don’t seem credible at all, such as the woman who claimed there were shards of glass in her Huggies wipes. There weren’t, but people sure panicked.

I’m sure there is a balance between staying informed and staying grounded, but I haven’t found it yet. Maybe some day we will find a way to communicate safety considerations on social media without being alarmist. Perhaps we can learn how to give and receive advice reasonably and without being offended. We all have the same goal: Keeping kids safe without over-protecting them.

Let’s start a new movement. Let’s bring back common sense and critical thinking. Instead of racing to comment, work on evaluating the situation. Is this really a danger, like car seat safety, or are we just trying to prove how smart and informed we are? Can we phrase this advice as an FYI instead of a judgment? Can we appreciate others desires to make sure our children are safe?

Find the common ground. Be civil to each other. And use your head.