What unfolded was a lesson in humanity. 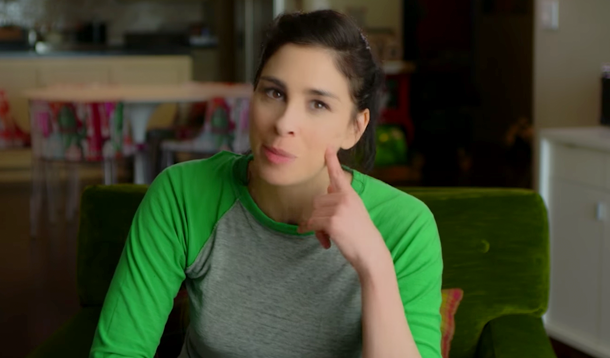 Sarah Silverman is known for her crass humour. She doesn’t take crap from anybody, and makes it no secret if she thinks you’re a dumbass. As far as comedy goes, Silverman is someone you can’t wait – and yet cringe to listen to – at Comedy Central Roasts.

When Jeremy Jamrozy called her the c-word on Twitter, any of her fans would have expected a cunning response nailing the guy’s butt to the wall and mic-dropping him with a biting burn. But, something else happened. What unfolded was a lesson in humanity.

Silverman reached out to the mudslinger with kindness. She looked at his Twitter feed and learned more about who he was, and what incredible obstacles he was facing. She cared about why he felt okay with bullying someone on social media.

Yes, the conversation was a lesson in love winning out over hate. But it was also so much more than that.

I believe in you. I read ur timeline & I see what ur doing & your rage is thinly veiled pain. But u know that. I know this feeling. Ps My back Fucking sux too. see what happens when u choose love. I see it in you.

“I believe in you. I read ur timeline & I see what ur doing & your rage is thinly veiled pain. But u know that,” she said in direct response to being called a disgusting name.

I can't choose love. A man that resembles Kevin spacey took that away when I was 8. I can't find peace if I could find that guy who ripped my body who stripped my innocence I'd kill him. He fucked me up and I'm poor so its hard to get help.

“I can't choose love. A man that resembles Kevin spacey took that away when I was 8,” Jeremy Jamrozy replied. The conversation continued, between a genuine Silverman and a broken Jamrozy.

It went back and forth until Silverman used her celebrity status to help get the man medical care he desperately needs to get back on his feet and on with his life. She offered an olive branch, instead of an insult to a man who wanted to hurt her. In so doing, she changed his life.

You might think that the lesson in all of this is that kindness wins. But what went down on Twitter in the dwindling days of 2017 revealed something else so very deep, and something that serves as a lesson to me, to you, and especially to our children; bullies aren’t soulless brutes. They’re sad people looking to make themselves feel better by making other people feel like crap.

I realize that that’s what our parents tried to tell us. Jamrozy is a living, breathing illustration that they were right.

Silverman’s genuine interest and kindness in the face of harassment revealed that bullies are worthy of pity. That’s not to say that killing a bully with kindness will work every time. Let’s be real; it won’t. But it does provide insight and wisdom for us to pass on to our kids about the people who go out of their way to make their lives miserable.

You know that adage that the way to find public speaking less scary is to picture everyone naked? Maybe the way to emotionally deal with the hell of being bullied is to picture the bully alone, crying and hurting. And to hope that someone reaches out to them, to try to heal their pain, so they might no longer feel the need to hurt other people.

RELATED: Why I Don't Want My Son to Fight Back Against Bullies