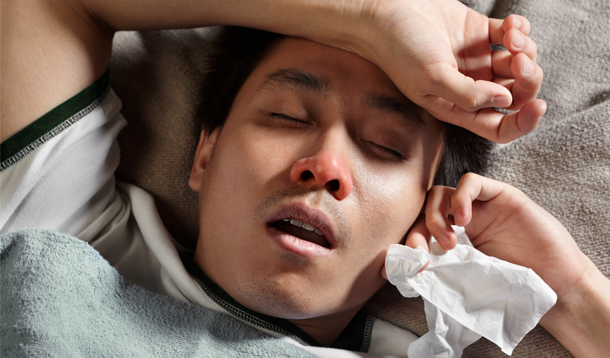 I just happened to be blowing my nose, sitting there in the waiting-room of my car's service department, phone in hand scrolling through news articles, when I found the CBC article "Canadian doctor says there's evidence the 'man flu' is actually real."

Of course, probably because I had suffered my old cold with no downtime just last week, I clicked through.

For the few who haven't heard of the phenomenon of the man-cold, it's just like a woman's cold, except men actually lie in bed, seeming to think that they're dying. The man-cold has become a meme in today's society. Heck, even commercials make fun of it. But this doc says that his testing on mice could suggest that women have a better immune response than men.

Scientifically very interesting. But then he went here:

"The whole point of doing this article is to prove that men are not wimps," he said in an interview. "Actually, we are suffering from something we have no control over ... [We] should be given the benefit of the doubt rather than being criticized for not functioning well during the flu or the common cold."

Wait, I thought. Did he just go there? Oh hell no he didn't.

I'm willing to concede ground on the man cold, even though I, and every woman, has had extremely bad colds and flus that would lay us up - except for the fact that someone still has to get shit done. No joke: once I was told to come into work, sick as a dog, because there was a meeting and nobody else knew how to run reports from our CRM. That my (male) boss cancelled meetings when he was sick and stayed home for four days at a time was not a fact that was lost on me. The world doesn't just stop working when people are sick; the kid still has to get to school, people still have to be fed, tasks around the house still have to get done, and these are still things that fall very much in the women's domain still, even though women are just as likely to be employed as well.

And we get stuff done regardless of how we personally feel about it, which is why - for the most part - women shit on the idea of the man cold. BUT as I said, I'll cut men some slack. Stranger things have happened in medical science than certain types of people reacting worse to illnesses.

Let's go back to the part where they want leeway for something that they have no control over: Nope. You're not going to get it. You know why? Because equality is a bitch, and so is karma.

For years and years and YEARS and years women have been shit upon by men for things that they have no control over. I could bring up at least a half a dozen examples, but let's go to the main biological difference for the sake of expediency: the uterus.

Here are some of the MAJOR things that women have been financially or emotionally punished for... that they have no control over... that are only in the realm of the uterus:

Sorry you feel like shit with your man-cold, guys. But you can't seriously ask for recognition of your suffering a "serious illness" yet.

Call us in a few hundred years, or whenever you decide to level the playing field and recognize that women are still suffering things that they have had no control over, and you help make it right for us too.

RELATED: 5 Days of the Annual "Back to School Cold" as Told in Gifs