Am I the Only One Who Thinks Peru's Beauty Contest Protest Was Weird?

I am perturbed that it takes so many years of this to say "perhaps it is kind of yucky to make a big deal about announcing their measurements." 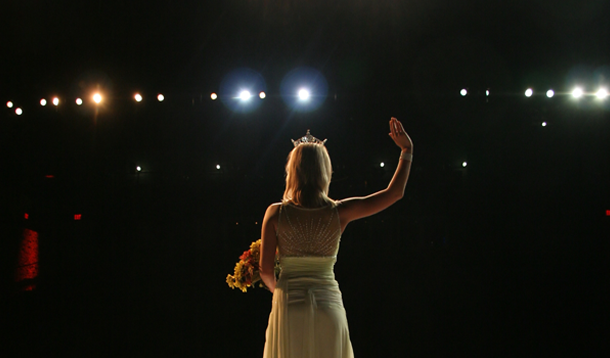 If there's one thing my husband and I don't see eye-to-eye on, it's the state of how the world treats women. I can hear his eyes roll whenever it comes up. It pisses me off sometimes, especially because I know he knows my history. I have my own #MeToo stories. I didn't feel like sharing, but I am glad that others did. I hope that, gradually, more men "get it."

For women, a lot of things are changing for the better in North America. But there are situations that still remind me that in many ways, such as when people celebrated Hugh Hefner as some sort of enlightened champion of women, we have a long, long way to go. But we are making progress, I think, even if it's awkward and fumbling and annoying like the father of daughters scenarios. You see, even as backwards as we are here in North America, we have it better than many. Women are still treated, frankly, like cattle in some parts of the world. No better than property.

In Peru, in South America, women decided to recite statistics on violence against women in their country. This is great. They announced it during a Miss Peru beauty contest. This is weird. They announced these statistics specifically instead of their personal measurements. Yay! (WTF.) Good on them!

I have lots of complicated feelings about this, which is murky because of my distance from the location and my privledge of being Canadian. I can't decide whether I'm thrilled that they hijacked such a ridulously old-fashioned establishment of sexism and ageism and shallow-AF beauty standards, or whether I'm pissed that it's taken this long for event organizers to get on board with realizing how weird and gross these sorts of events are in the midst of a (supposed) cultural revolution of respect for women. Because make no mistake: the pageant organizers were in on this. This is 100% a publicity stunt to bring attention to how bad certain things are. 2015 saw the #NiUnaMenos (not one less) in Argentina to protest femicides. In 2016, it spread to Peru. Hell, just last week, #PeruPaisdeVioladores (Peru country of rapists) was trending on Twitter. I am perturbed that it takes so many years of this to say "perhaps it is kind of yucky to make a big deal about announcing their measurements."

Of course, to closely examine such social flaws in others requires a hard look at our own. And it doesn't require a hard look to see that we're also lousy at ditching such weird and dehumanizing events whose purpose is exclusively turning women and their bodies into objects of consumption for the male gaze (yeah, I'm looking at you, Miss Canada. Oh and also you, TIFF Cleavage Awards). You know, for shits and giggles I went looking for a Mister Canada, and I couldn't find anything more than a Wikipedia stub that doesn't have winners past 2012.

Regardless, I am glad that this event happened at Miss Peru, and for all the many complaints and trending hashtags and confessions. We must continue to denounce the abuse of women, no matter where it is in the world. It is barbaric and inhumane to cause or overlook physical and emotional harm to human beings because they are women - and cultural establishments of objectification doesn't deserve special protection just because the damage it does isn't visible to the eye.

I feel like it has become apparent that change won't come in a landslide for us and our daughters around the world. But perhaps with knowledge and sacrifice we will erode the sharp edges of the world for our granddaughters and those who come afterwards.