Get Real: Hugh Hefner Was No Social Champion

You can't say that Playboy did nothing but empower women. I'm sorry; you just can't. 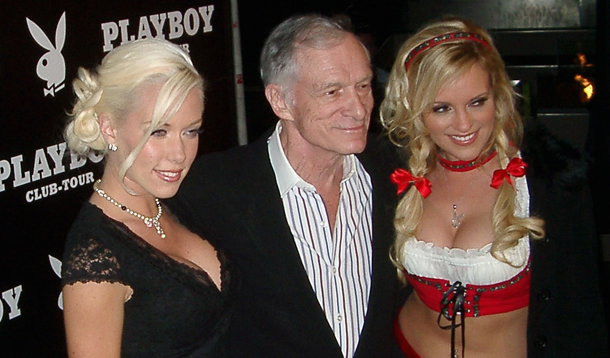 You can't be living in North America today and not know what Playboy is: this much we can say is a fact about the late Hugh Hefner's empire. For over 60 years, Playboy has been a standard for nudity with a touch of "class." Like all great subjects, Playboy (and Hugh himself) does not reduce well to black and white. But I do believe that when we take off our rose-tinted glasses, it's pretty easy to argue he dabbled in some pretty dark shades of grey.

Playboy got its start in 1953, a time when most women will agree America definitely needed a high heel planted firmly in its backside. It's difficult to reduce the societal issues that resulted in a cultural de-evolution of the time to an easy TL;DR. A significant chunk of what was going on had to do with the fact that World War II had ended, and the women who had been needed in the workforce to keep the country running were now, more or less, required to vacate the premises to make room for the men coming home. But women had kinda decided they liked being Rosie the Riveter, and this was going head to head with "get back in the kitchen" Good Housewife propaganda and the very sad reality that Elvis wiggling his hips on TV was considered heathenishly sinful.

Call it what you will. By the standards of 1950s, you can make the case that Hugh was a radical progressive who opened the door and made sex something we could talk about freely. He promoted reproductive choice for women and gay rights. BUT. Let's not make him a frickin' saint. He wasn't doing this for women. He wasn't even neccesarily doing it for men.

Playboy was, Hugh said, "devoted to subjects I was interested in — the contemporary equivalents of wine, women and song, though not necessarily in that order." Hugh maintained right from the get go that he "...wanted to focus on the good-life concept. A lifestyle." Indeed, for 64 years, Hugh's messages of high-style hedonism have come through loud and clear. When you look at the life the man led, promotion of gay rights, civil rights, and women's reproductive choice and contraception looks a whole lot more like enabling the unfettered and consequence-free lifestyle he desired: living in a mansion where he'd be sexually serviced the rest of his life by multiple young women; never having to worry about the icky side effects like, I dunno, having enough children to rival Genghis Khan in reproduction (and being required to support all of them).

#GloriaSteinem went undercover for her 1963 expose of the #Playboy club.https://t.co/F5yVslLIDYpic.twitter.com/LHu07Jmh34
5/

I could be biased; I fully acknowledge this. Hell, it's pretty hard not to be. Putting aside the accusations of Quaaludes, verbal abuse and forced sex, the extremely tiny number of WOC being represented, and the fact that he sold his Playboy Mansion to Dennis Hof - a brothel owner in Nevada - you still have a man who made millions out of getting young 20-something women to get naked and turn their bodies into an object for his own pleasure and that of other men. That's what we call objectification, surprisingly enough. And willingness aside, objectification is problematic in that it reduces women from intelligent, self-aware individuals to a thing meant to be used and discarded.

You can't say that Playboy did nothing but empower women. I'm sorry; you just can't. And to hear Hugh Hefner's opinions on why there was nothing sexist about showing beautiful women? You've got to be kidding - this ranks right up there with the "grab her by the pussy" defense.

Even if you do want to say he forced open the door to discussions about sexual pleasure, Playboy didn't change with the times. Hugh got what he wanted out of Playboy (and life) relatively early on; it stayed there for the next 50 odd years - images of women's bodies to be enjoyed no differently than a nice cigar or a fine cognac. And I can't believe so many people are glorifying the man as some sort of inventor of the modern man or triumphant leader of women. We women have been paying the price of his so-called sexual revolution/ exploitation with decades of hangups over getting older and not having the perfect body, to the tune of an entire industry waiting there to continue to exploit us and our wallets as we try to cleave ourselves to this male gaze dream.

Your brain and soul? Nobody cares about that.

I'm not going to say the man did nothing for us, nor that I'm glad that he is dead, but I'm also not going to fawn over the late emperor of the empire that profited in devaluing us. Hopefully your magazine continues on with a fresh and enlightened eye.