And the Best Friend of the Year Award Goes to...

Selena Gomez reveals that she's been recovering from a kidney transplant - and the donor was her best friend, Francia Raisa. 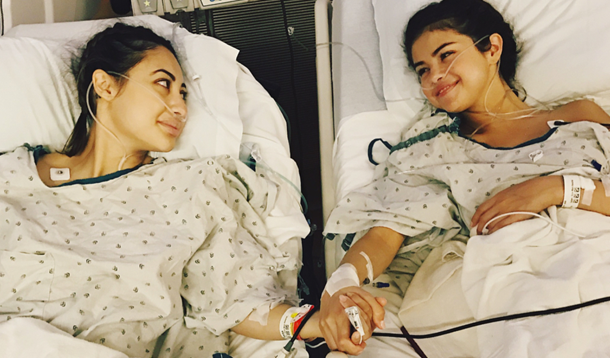 Selena Gomez, who was diagnosed with the autoimmune disease lupus back in 2015 and did an interview about undergoing chemotherapy for it, has stepped back into the spotlight after a quiet summer and announced that the reason for her absence was that she was recovering from a kidney transplant in an instagram post on Thursday, September 14:

"I’m very aware some of my fans had noticed I was laying low for part of the summer and questioning why I wasn’t promoting my new music, which I was extremely proud of. So I found out I needed to get a kidney transplant due to my Lupus and was recovering. It was what I needed to do for my overall health. I honestly look forward to sharing with you, soon my journey through these past several months as I have always wanted to do with you."

She also revealed that the donor was one of her best friends, Francia Raisa, who is known for her acting role in The Secret Life of the American Teenager.

“There aren’t words to describe how I can possibly thank my beautiful friend Francia Raisa,” said Gomez. “She gave me the ultimate gift and sacrifice by donating her kidney to me. I am incredibly blessed. I love you so much sis.”

Being a living donor is a heroic task that is not without risk. Not only do they face the same sort of risks for people who undergo any major surgery, they also have possible long term risks that include hypertension, hernias, the possible need to undergo dialysis if their remaining kidney fails or becomes impaired, and even death. But Francia Raisa was willing to endure all that risk for Selena, who she called her "forever friend" back in July.

The happy faces of the two best friends, side by side in the recovery room, are truly beautiful, as is Selena's tribute to Francia and the doctors who helped her prior to and post surgery. She also shared a photo of her scar in the Instagram story.

We wish Selena Gomez well on her road to recovery!

RELATED: How A Heart Transplant Changed Our Lives