In fact, I think this app is kind of brilliant. 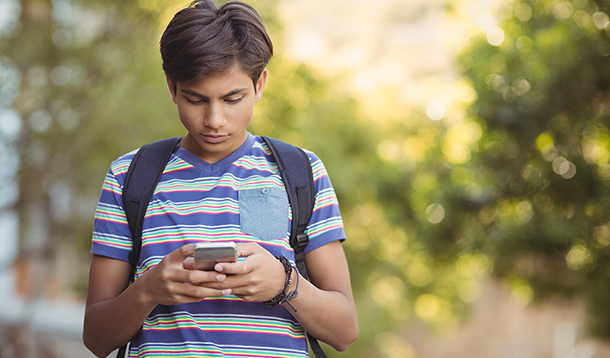 I am by no means a Helicopter parent. Just last week, I sent my two boys out on the $20 Challenge, and my younger son had an Evel Knievel type ‘head over the handlebars’ accident on his bike. With a bleeding leg and ankle, and one arm that may or may not have been broken (it wasn’t!) he made his way home. By the time I got there, he was bandaged, iced, and playing video games.

Will I send them out again with twenty bucks and instructions not to be home until dinner? Hell, ya.

It’s a good experience that taught them how to work together, why ditches are not a fun place to ride your bike, and band-aids and Freezies are the cure all for what ails you.

But that doesn’t mean I don’t think this app that will freeze your kids’ phone is a bad thing. In fact, I think it’s pretty brilliant.

Designed by a dad who was tired of his son ignoring his phone calls and texts, ReplyASAP will freeze your teen’s phone and sound an alarm until he or she answers or acknowledges the call or message from a parent.

And as an added bonus, parents will get a notification when a message has been read.

So far, I’ve been pretty lucky in that both my boys almost always answer my calls or texts immediately. But there have been a few that went unanswered, and quite frankly, I lose my mind.

You get the picture.

Listen, we all have our things. Mine is fear of kidnapping, and I may or may not still cut their grapes in half.

What? Have you ever seen a grape lodged in someone’s throat? It’s scary sh*t.

Also, if you don’t have tween/teens, I’m going to let you in on a little secret. Let’s say they are in trouble for something. Maybe you took away video games for not doing chores, or they have an earlier curfew because of a failed test. Well, those little rascals will NOT ANSWER YOUR TEXTS just to punish you back. It’s the whole “refusing to talk to your parents because you’re mad” from when you were a kid, taken to a whole new level.

In the meantime, thanks to this new app, they’ll have to answer my texts or calls - even when they are mad at me - or have their phone frozen. Never mind not being able to watch YouTube videos, or download funny memes. The threat of not being able to keep up their SnapChat streaks is enough motivation to ensure they’ll answer.

Now if only someone could come up with a grape choking app, I’d have nothing to worry about.

RELATED: Are You Talking to Your Teens About Their Apps? This is How to Start