I'm Sick of "Beauty Is Better Than Brains" Messaging. We Need to Stop. 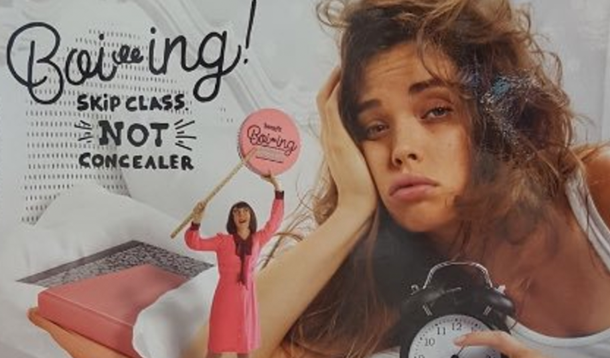 Nope, that isn’t a typo. That is ACTUALLY a tagline for the latest ad campaign by popular US cosmetics company, Benefit Cosmetics. If you haven’t seen it yet, take a look and be prepared to be totally pissed off.

Spotted by a friend: "skip class not concealer" so let me get this straight as long you're pretty, you don't need an education? @BenefitUK pic.twitter.com/qFaiIAsxJ4

First spotted in the UK, the ad was met by immediate backlash – and rightfully so. As publications started rolling out their critiques of the ad, the Twitterstorm ensued, yielding thousands of tweets by angry consumers who were horrified by the fact that Benefit would actually attempt to sell their product at the expense of young girls’ self esteem and self perception. The hashtag #skipbenefitnotclass was born. Sh*t went down.

They simply can’t be both.

Let’s take a minute to think about HOW harmful this type of messaging is for our kids. One of the biggest influences on a child’s identity development is mass media. Studies show that kids as young as 6 years old begin picking up on social cues and stereotypes, incorporating them into their notions of self. We no longer exist in a time when we can shelter our kids from harmful messaging, because the truth is that we are surrounded and saturated by popular media. The Benefit ad I’m talking about was spotted at a local drugstore, blasting its message loud and clear for anyone and everyone to see.

So what? It’s only one ad, right? Sadly, no. This is just one example of the many harmful media portrayals of women that there are out there. 6 years ago, JC Penny released a shirt that read “I’m too pretty to do homework so my brother does it for me.” Around the same time, Forever 21 released a back-to-school fashion line for girls including shirts that read “allergic to algebra” and “skool sucks,” while the boy’s back-to-school line included no such messaging.

Think of any teen movie you’ve ever seen – have YOU ever seen a smart cheerleader? Is that a character that has ever been promoted in popular movie? I think that we can all agree that, no, the “smart girl” always ends up going through some ridiculous makeover before she can “get the guy.” Oh, and that makeover ALWAYS entails that her glasses come off – because who wants to look SMART?!

Sure, Lindsay Lohan’s Mean Girls character didn’t need a makeover, but she needed to hide her math savvy completely in order to fit in with the cool girls, just like every other nerdy girl in every other classic teen flick. Let’s not even get started with Disney, a childhood favourite for most kids. Guys, The Little Mermaid’s Ariel COULDN’T EVEN SPEAK, yet of course, that guy totally loved her because she was drop dead smokin’ hot! What does THAT tell our kids?!

The fact is that you can’t be what you can’t see. If kids aren’t given the opportunity to see girls who are both smart AND beautiful, they truly begin to believe that being one of those girls isn’t plausible; that those girls don’t and can’t exist – that it’s not even an option. If brands that we buy and trust, like Benefit, are telling our kids that it’s more important to skip class than to skip their makeup, then we’ve got a major problem on our hands.

Big companies and popular media need to be held accountable for the power they wield over vulnerable sectors such as young children and teens. Not only do they have a responsibility to act ethically, but in fact, they could be using their power to eradicate stereotypes rather than reinforce them! I’m no marketing genius, but HOW did they not opt for “Late for class? We’ve got you covered.” See what I did there?! Bam, a super easy way for them to promote beauty and brains, to use their undeniable power and popularity to make our world a better place for not only their consumers, but for all of us!

It’s natural to feel powerless, to feel that pop culture is so much bigger than us and that we can’t possibly make a difference. It takes a village; we all know that. But it’s important to remember that it truly is up to us to make this planet a better place for our kids, to help reshape our culture and its values. So, what can you do RIGHT now to make sure that ads like Benefit don’t negatively affect our children? Or better yet, how do we make them cease to exist entirely?

Contact the brands and media outlets promoting messages that threaten to harm our children and tell them you won’t stand for it! Social media is not only a great way to force companies into addressing your concerns, but also a great way to get your voice heard by an audience prepared to have your back! Skeptical? All of the backlash Benefit received over Twitter is one of the reasons that the UK is now considering a ban on ads that portray men and women in ways that reinforce harmful gender stereotypes! That’s a pretty huge deal – WE did that!

Refuse to buy brands that promote harmful messages to their consumers. Do we all remember the Barbie doll that proclaimed “math class is tough” back in the 80s? For years, Mattel hasn’t cared and has refused to change its promoted values and ideals. Well, after consumers finally stopped buying the dolls – Barbie has finally caved. After all, it’s a consumer’s market, and if enough people demand, Mattel must supply otherwise they simply won’t sell their product. The new Barbie commercial came out in late 2015 and our wishes have come true – intelligence and education are at the forefront of the new Barbie campaign!

Seriously – refusing to buy stuff put out by unethical companies goes a long long way. And hey, if Barbie can become smart, then so can the rest of those stereotype-touting brands out there!

The thing we have the most control over is conversation. Talk to one another about these ads, question them, look at media with a critical eye. Ask your child if they think it’s weird that a company is telling girls to prioritize the way they look over education, and ask them if THEY think that’s okay. Talk to them about how harmful stereotypes can be. Talk to them about the negative effects of popular media, talk to them about being critical and about choosing values which they believe in. Conversation is everything!

Teach kids that they can be both!

One of the most harmful effects of media stereotyping is that it seeks to force us into an airtight box. How often have you been convinced that you need to be artsy OR mathematical, right brained OR left brained, beautiful OR smart? We are multifaceted human beings with a variety of interests, all of which should be nurtured. Allow your child to explore all of their passion projects, encourage them to be unlike anyone they’ve ever met before, challenge them to become the person of their wildest dreams!

Be the best role model.

Wait, you already are! But seriously, sometimes it’s tough not to fall into the stereotype trap. Just be mindful of the ways in which you repeat and re-live the stories the media tries to tell us. Reinforcing to your kids that regardless of gender, everyone has the capacity to do and be anything they want goes a long way – they need to hear that from YOU!

What about the guys in our lives?

Finally, I wanted to throw this in here because often men WANT to help, but don’t know how or don’t feel that that their voice matters. I’m here to tell YOU to tell the men in your lives that yes, we NEED them, and that yes, their voice matters! It is so beyond important to have both men AND women fighting for the same cause. There are a ton of media-reproduced stereotypes about boys that are just as harmful – but we’ll save that for another article!

The key point is that having a male role model speak to your child about the importance of prioritizing brains over beauty, or better yet, the importance of not feeling as though they must choose, is immeasurable. Make sure the men in your life know that their voice is just as important as yours. Make sure they’re on your side!

RELATED: Sex Sells - Until This Happens

Vanessa Vakharia is the Founder and Chief Inspiration Officer of the Math Guru. She is a teacher with a Bachelor of Commerce, a degree in Graphic Design and a Masters degree in Mathematics Education. Born and raised in Toronto, 34 year old  Vanessa attended the University of Guelph, D’Youville College, Humber College and the University of British Columbia. She is recognized as a leading expert and published author in the field of Youth Engagement and Education. She specializes in teen engagement in STEM, with a specific focus on engaging young women to embrace STEM as a part of their fluid identities.