Pepsi's new ad isn't just offensive to the woke, it was poorly timed, too. 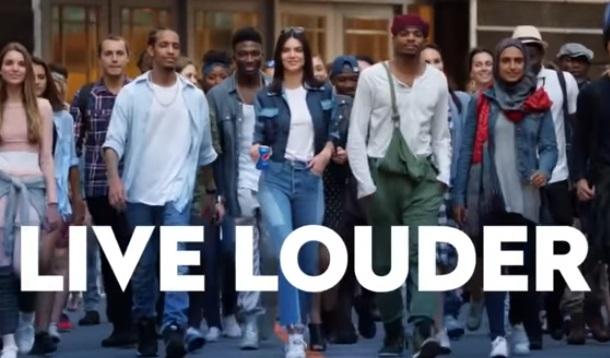 Us white people, even the ones who want to be woke, still struggle with how to support friends of colour in the years following #BlackLivesMatter. We're not perfect. We're working on it. And yeah, sometimes we screw up even so.

Even the least open-minded, however, went all "NOPE" when we saw Pepsi's new ad that they released yesterday.

In Pepsi's new ad, Kendall Jenner decides to leave a photoshoot after a cutie activist gives her "THAT LOOK," rips off her blonde wig, and joins a group of smiling, chic-ly dressed hipsters of colour for a march down the street. She confronts a group of police bystanders (who look bored and aren't wielding any pepperspray or riot gear), hands one a Pepsi, and the cop gives a trademark Kayne shrug, like: I AM COOL WITH THE PLIGHT OF THE BLACK PEOPLES. I HAVE A PEPSI NOW.

Following the facepalm heard 'round the world, Twitter immediately set itself on fire about how Pepsi has solved racism. This should have surprised absolutely nobody, especially including Pepsi's marketing team, which makes me wonder if they would actually do such a heinous thing on purpose. I mean, I understand that old cliche that no publicity is bad publicity. But... maybe it should be. Maybe you just shouldn't GO there, even for the sake of selling a goddamn Pepsi and lifting your stock price.

one of these things is not like the others. #pepsi pic.twitter.com/BlozlTCouV

"Which one of you shook my can?!" Pepsi #LiveForNow pic.twitter.com/rt0b5Pzb3I

I'm pretty sure #Pepsi just left out the punctuation in their ad. I fixed it. #LiveForNow pic.twitter.com/Z7QVeHt4yb

Of course, it doesn't actually end there. And to be fair, Pepsi probably didn't count on this little tag team faux pas.

Pepsi's ad, which was cringeworthy enough in it's own right, was also ironically karmatically smited by reality. The highest irony of it all is that this stupid commercial is getting more newstime than what happened in Syria. While everybody was busy saying "OH NO THEY DI'INT," dozens of brown people were dying to a deadly sarin gas attack, and photos of dead children that nobody wanted taking refuge in North America flooded the less-shiny, under-the-rug portions of the internet, a silent signpost to the fact that we still got some global fucking humanitarian issues to contend with as a species, no matter how self-righeous we think we can be.

In fact, I'm not allowed to even show these photos of the victims that everyone is ignoring, sadly. (TRIGGER WARNING: HERE IN THIS PARAGRAPH BE PICTURES OF DEAD PEOPLE.) But I am linking to them. Yeah, reality is not pleasant and happy and light. I hope that someone will click through and see and not forget these people. I hope we can muster a fraction of the percentage of the outrage that this atrocity deserves.

I mean, even Trump managed to get off his golden throne long enough to blame Obama for not doing more to stop what's going on in Syria, even if he couldn't be arsed to rage tweet about it.

I don't actually want to hear the whole "Yeah, but, first we gotta fix the problems at home." No, first we gotta fix the problems of us being unsympathetic and exploitative assholes. I think we might just be surprised what falls in line if people actually just get together and say "NOPE. We ain't doing this. This isn't cool." But that's a whole other story and complaint.

In the meantime, however, I think the very least we can do is try to be the tiniest bit sensitive to the fact that people are being punished and are suffering and dying out there while they're protesting their dehumanization. Even in North America. Call me crazy, but I didn't see a Pepsi making NoDAPL a fun time. I'm not really sure that a thirst-quencher would have kept Trayvon Martin alive. And I can't help but think it takes some cajones to trivialize things like racism into something a corporation can make go away IF ONLY JUST MORE PEOPLE OFFERED EACH OTHER A SOFT DRINK.

Maybe we should try to fix the victims of Syria with a Pepsi?