Is it a Good Thing to Remove Scales From Gyms? Hell Yes.

The scale can lie. 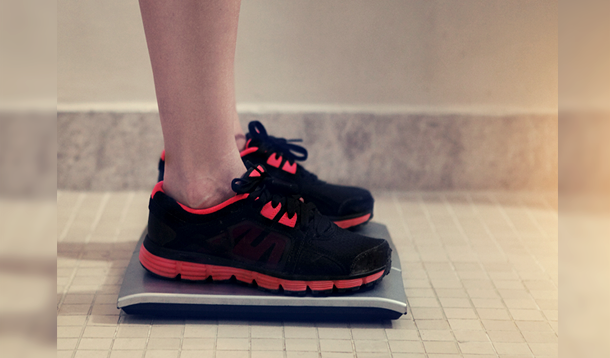 Carleton University in Ottawa is in hot water after removing a scale from the fitness centre to help stop people from obsessing about weight.

While some are all for it, there was a backlash on social media using #BringBackTheScale from people who though the idea was idiotic. Comments ranged from “How much does a snowflake weigh?” to "Obesity is far more of a problem than other eating disorders. Stop this ridiculous ‘everything is triggering’ shit?"

I fall into the court of thinking it’s a good idea to remove the scales. For 12 years, I struggled with bulimia and anorexia and obsessed about my weight every single day. I was, in fact, so fixated with the scale that to this day I can guess my weight within .2 pounds.

But here’s the thing: the numbers on the scale will lie to you like a bad boyfriend who swears he will never cheat again.

Adrienne Osuna a perfect example of this. She went viral on the internet a few weeks ago after posting a before and after transformation on Instagram. She went from a size 16 to a size 10. The amount of weight she lost? Two pounds.

The scale can lie.

One of the first things I was told to do when I began rehab at an eating disorder clinic was to get rid of my scale. I would love to say that after a few months I stopped obsessing and realized that the scale meant nothing, but it took me YEARS to come to that conclusion.

It wasn’t until I began speed skating and training for a triathlon that I realized how wrong the scale was. As the numbers went up on the scale, my body became smaller. The muscle I was building weighed more than the fat I was losing, and it was more compact.

Not everyone who wants the scale gone has an eating disorder, but maybe we should all stop focusing what the scale says and focus on other numbers instead.

Focus on how many steps you’ve taken today.

Focus on your cholesterol levels.

Focus on your blood pressure numbers.

Focus on how many fruits and vegetables you eat each day.

Focus on how many hours of sleep you get each night.

Focus on how many baby steps you’ve taken forward – because change always comes in baby steps, never in leaps and bounds.

Focus on how many times you smile and laugh throughout any given day.

Focus on how many times you’ve said to yourself “I can do this.”

And if you’re really upset about not having access to a scale at a university fitness centre, basic models start at about $15.00.

But, it doesn’t weigh snowflakes.

RELATED: The Diet Judger Who Went on a Diet