Hey Haters: Why the Hate on the BBC Viral Video's Parents?

I salute you Robert Kelly. 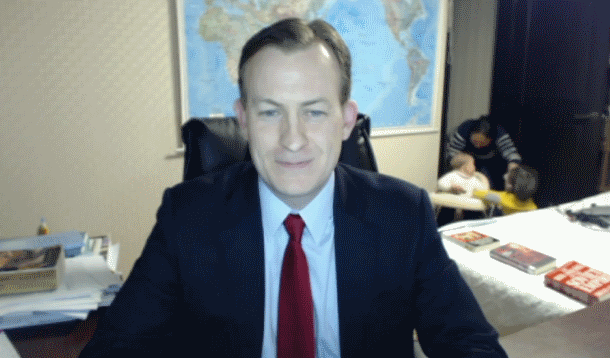 Unless you’re living under a social media-free rock, you’ve seen the viral BBC video of a professor and father Robert Kelly giving an interview about South Korea.

If you haven’t seen it, here’s a run-down: toddler walks into Kelly’s home office like a boss, strutting her stuff for the camera. Soon after, a rogue baby in an ExerSaucer rolls into the room in hot pursuit.

Kelly cracks a small smile, attempting to shoo his toddler away. Suddenly a woman bursts onto the scene, dragging the kids out the door with some difficulty. This is great comedic stuff, people.

The video has gone very, very viral, with over 10 million views on Facebook, and reaction from celebrities such as Tom Hanks:

Like so many others, I shared the video on my Facebook page. As a mom who teleworks 2-3 days per week, I have definitely experienced a bust-in during important conference calls with the boss…complete with me shooting death stares and frantically waving my arms at my children.

So colour me surprised when I started to see negative reactions to the video. People were suddenly up in arms over the man-handling of the toddler, who was dragged from the room. Next on the list of parenting transgressions was Kelly “shoving” his child aside to continue the interview. Apparently Kelly needed to acknowledge the situation, and plop his child on his lap while he continued to speak.

And can we talk about the “nanny” or “caregiver?” Um, actually, that’s his WIFE Jung-a Kim, and I highly doubt she will be fired after this episode.

When parenting videos go viral, without a doubt the sanctimommies and high-horse daddies will emerge from the woodwork in droves. And ALL of these people forget a number of things while they sit in their ivory parenting towers, wielding judgmental comments with the clickity-clack of their keyboards.

Robert Kelly wasn’t on a conference call. He wasn’t running an important meeting with executives, or Skyping with his boss. He was on live TV, which is terrifying enough without your toddler and baby busting in on the scene. The fact that he was able to keep going with the interview was commendable!

Could Mommy have slowed down and gently chatted with the toddler for several minutes in order to get her out of the room? Sure, maybe. But can you honestly tell me that you would put on your “positive parenting” hat if this was you? I’d be dragging those kids out the door faster than you could say BBC.

I don’t know about you, but I can’t think when my children are in the room. I can’t remember what I was supposed to get out of the fridge, I have no idea if the dog has been fed all day, and I’m not sure the last time my preschooler peed. The reason for this is that my kids DO NOT STOP TALKING. It’s like a freight train is running through my head, and all my thoughts scatter like the wind. I need them to leave in order to concentrate on anything – that, or I need to go into a locked room, ALONE.

Being humourless and judgmental is winning you no points

Can we all just lighten up a little bit? Have a laugh? Recognize that sometimes, under situations of stress, we may not react the way we want to as parents? It’s all good – we’re doing the very best we can. Just think about how many laughs this video will get on a future wedding day.

A final thought on this work-from-home disaster situation…I think Robert Kelly and his wife need to seriously consider getting a lock on that office door.

From the trenches of work-from-home parents everywhere – I salute you Robert Kelly.

Misty is a freelance writer with Chickadee Creative and voice for the Ottawa blog Kids in the Capital. A part-time health researcher with the Ottawa Hospital Research Institute, Misty manages giant spreadsheets and is passionate about evidence-based medicine. A mother to two young girls and owner of one adopted pug named Moose, Misty shares her life with a beloved husband and partner-in-crime.

When she's not writing, you can find Misty out in her giant vegetable patch, in the kitchen experimenting with the latest health craze, or trying to unwind with some yoga (a good bottle of wine also does the trick!)